11 Cool Features We Love About the Hummer EV

In the early ’90s the actor, eventual politician, and man who would perpetually “be back,” Arnold Schwarzenegger pushed for the military Humvee vehicle to be sold to the public. Suddenly he and many, many others that decided that a military-grade vehicle would look great in their driveway were rolling around in the H1.

In late 1999 AM General, the manufacturer of the military-grade Humvee and H1 sold the name Hummer to GM. Then GM unveiled the H2, a more civilized version of the very large, very polarizing SUV. And in 2010, the Hummer brand went the way of the dodo and Saturn.

The 2024 GMC Hummer EV SUV and 2022 Hummer EV pickup will be coming to a charging station near you. Here are some of our favorite features.

Watts to Freedom is the launch control feature of the GMC Hummer EV “supertrucks” (as GM calls them). But the feature does more than just propel the 9,046-pound Hummer EV pickup from 0-60 mph in an impressive 3 seconds with the tri-motor variant pickup. When enabled, a series of onscreen animations, haptic feedback from the seat, and audio cues prepare the driver for the experience while the vehicle lowers itself 2 inches. Then you’re off.

It sounds more like an amusement park ride than a feature, and that’s exactly why we love it and can’t wait to experience it for ourselves. 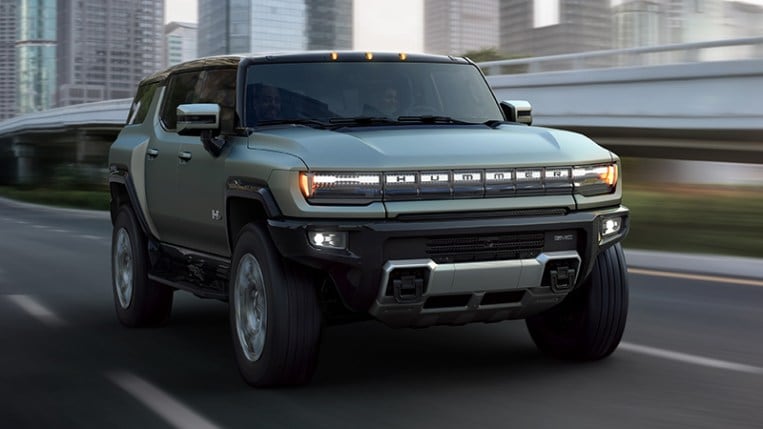 It’s the number one question asked when anyone brings up the topic of an EV. For those looking to place the Hummer in their driveway (but probably not their garage, because the thing is huge), they’ll be happy to know that GM is targeting a range of 350 miles for the Hummer EV truck. You may have tight city street anxiety in these vehicles, but definitely not range anxiety.

Everything about the upcoming Hummer EVs is big, including the battery pack. With 200 kWh of capacity using GM’s Ultium electric vehicle platform, the Hummer’s batteries dwarf those from other automakers. For comparison, Tesla’s Model S has a 100 kWh capacity battery pack. Of course, that huge battery is one of the reasons for the vehicle’s 9,046-pound curb weight. 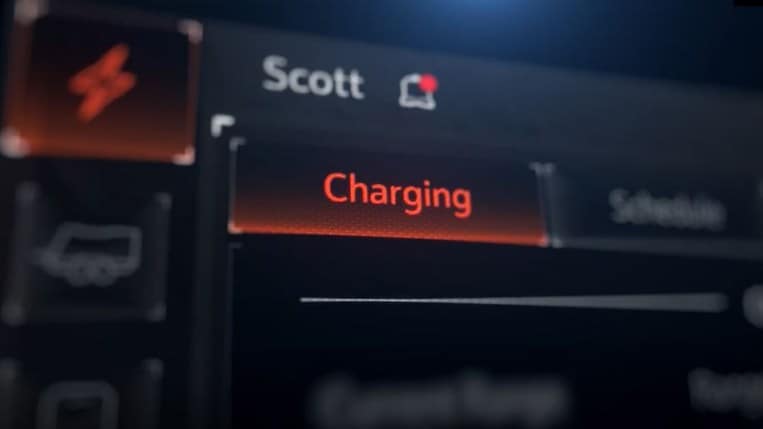 To keep that 200 kWh battery pack charged you’re going to need to be able to push a lot of electrons into the vehicle as quickly as possible. GM opted for an 800-volt architecture that supports a 350 kW charge rate via a DC fast charger. Other vehicles coming to market that charge this quickly are the Hyundai Ioniq 5, Kia EV6, and Genesis GV60. All of those vehicles will be dwarfed by the majesty of the Hummer EV as they all line up to charge a whole lot quicker than other EVs. 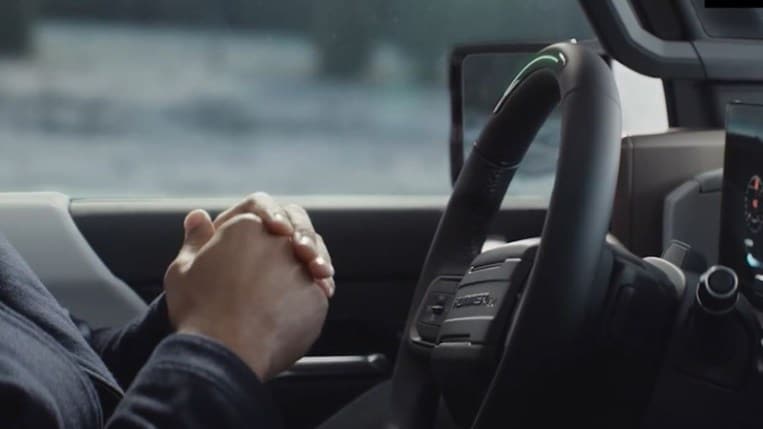 GM’s hands-free driver assistance system will be available as an option on the Hummer EV. First available in Cadillac luxury cars, the driver’s assistance system is now landing in select GM vehicles. The system allows drivers to remove their hands from the steering wheel while it is engaged. The driver still has to pay attention to the road and traffic and is monitored via a sensor on the steering column.

Also, Super Cruise will only work on highways already mapped to support it. So don’t expect to turn it on while cruising down a back road. Still, it’s one of the best advanced driver assistance systems on the market today, and soon it’ll be in a giant EV Hummer. 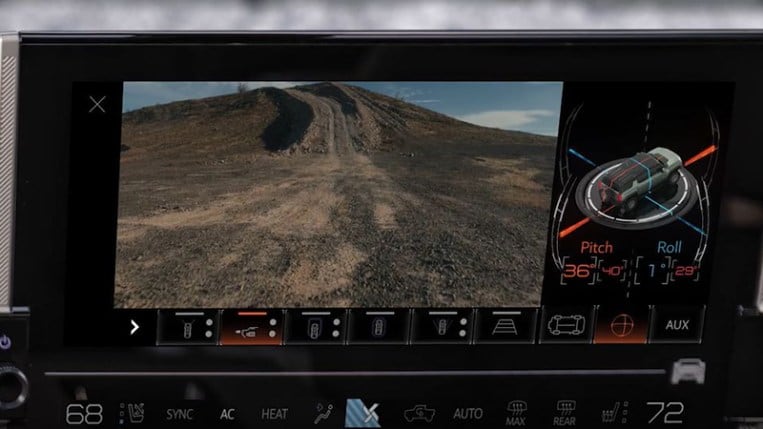 With a whopping 18 available cameras on the pickup and 17 on the SUV, UltraVision offers drivers real-time views of the world around and below the Hummer EV. For those that brave the rigorous world of off-roading, these cameras could replace the spotter that typically keeps the driver from making a grave mistake. Plus if they get dirty there’s a wash function, and the lens protectors are replaceable. 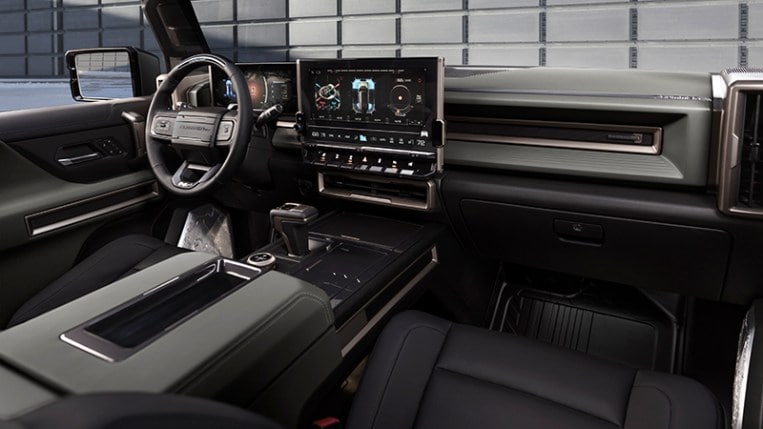 Like its gas-powered predecessor, the Hummer EV has an immense interior with enough cabin space to accommodate three large adults across the back seat. In the front, a 13.4-inch touchscreen houses the vehicle’s infotainment center. Below it, there are actual buttons that control climate, drivetrain options, and functions such as the heated steering wheel.

Designwise, the interior is outfitted with what feels like dozens of H letters. One interesting aspect is the references to the moon. The dead pedal resembles the footprint of Neil Armstrong’s boot. There’s also a map of the Sea of Tranquility in the speaker grilles and in the center console cubby. 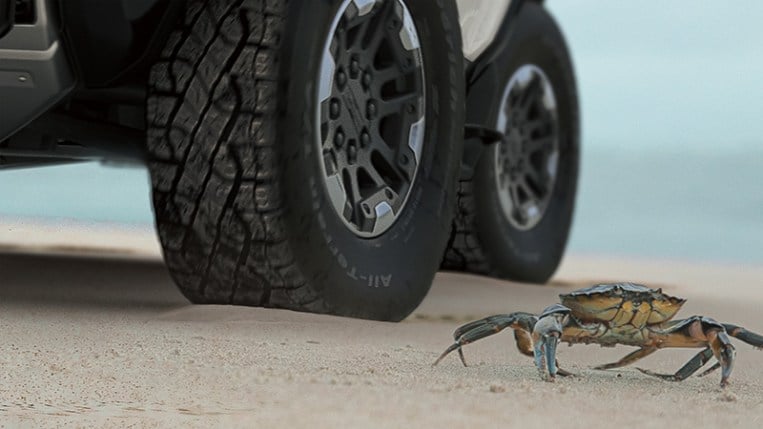 The Hummer’s low-speed Crab Walk option can turn all four wheels diagonally in the same direction. With this feature, drivers can move diagonally to move around a difficult obstacle, whether it’s a gigantic boulder on a trail or a group of shopping carts in the mall parking lot. 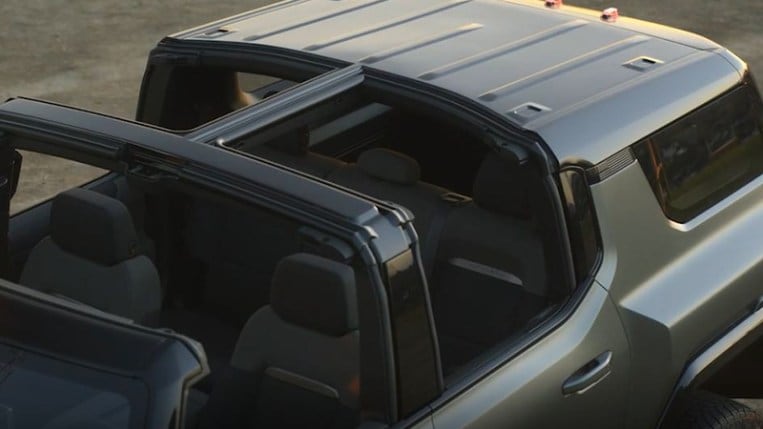 With four transparent removable modular sections, the Hummer is the very large convertible EV off-roader you didn’t realize you wanted. The roof sections store in the large front trunk, which means the ability to go alfresco while on the go is possible. 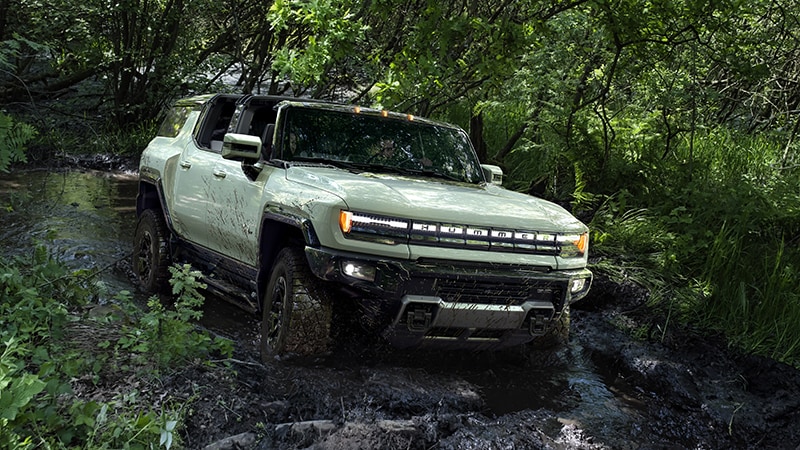 As you expect from a vehicle that in another life was a military-grade transport vehicle, the Hummer EV retains its off-road DNA. The front differential can be locked. In addition, the rear motors simulate a locking rear differential by turning both rear wheels at the same time.

The vehicle also supports torque vectoring that controls the power sent to each rear wheel. There’s also full underbody armor to protect the underside of the vehicle. Finally, the adaptive air ride system can lift the vehicle half a foot in Extract mode to help drivers ford through water and traverse over large obstacles.

Last but not least is the Power Station generator. Like the Ford F-150, the Hummer EV SUV has the option to be outfitted with its own power supply. It enables 19.2kW AC charging, the ability to charge other EVs (240v/25A/6kW), and generator capabilities (120v/25A/3kW) to plug in electronics for tailgating or camping. The Power Station will also be available in the Hummer EV pickup in the future. See GMC Hummer EV models for sale