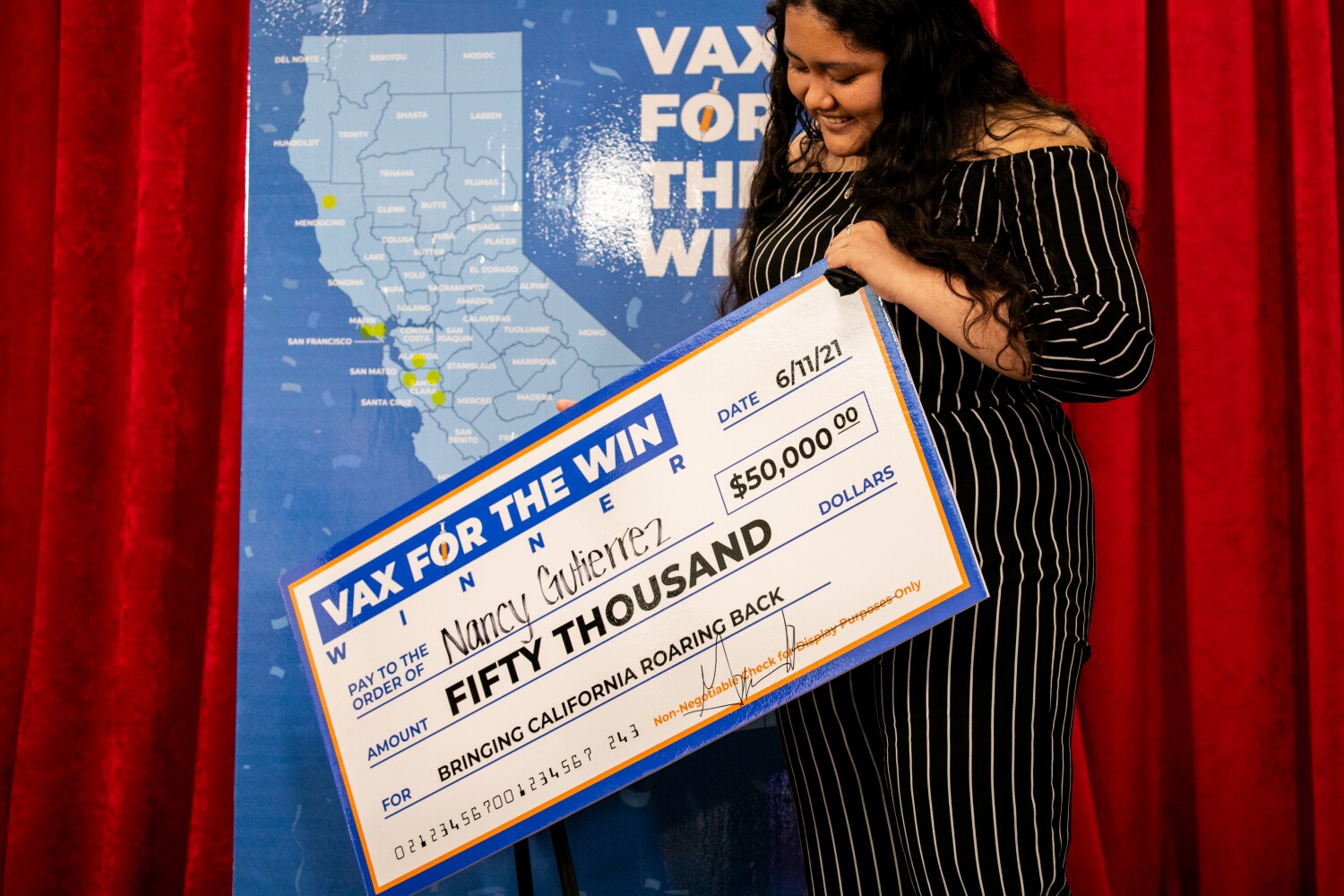 Fifteen Californians will soon be $50,000 richer — courtesy of a shot in the arm and the luck of the draw.

The second batch of winners in the state’s massive COVID-19 vaccine lottery was selected Friday through a randomized number drawing, with Gov. Gavin Newsom emceeing the proceedings from San Diego County.

All told, 30 Californians will win $50,000 apiece as part of the state’s “Vax for the Win” program. The drawings will culminate Tuesday with the selection of 10 grand-prize winners, each of whom will take home $1.5 million.

“This includes you or it doesn’t,” Newsom said. “You’ll make that decision for yourself. I would highly encourage, if you’re on the fence, to go out and get vaccinated before Tuesday.”

Any California resident who has received at least one vaccine dose is automatically entered for a chance at the cash prizes — though the money won’t be paid out until after the winner has completed his or her inoculation series.

As they did last week, officials did not name the latest winners, identifying them only by their home counties.

Winners will be contacted directly over the next few days, though they can remain anonymous or decline the prizes if they wish.

Most of last week’s winners have not come forward publicly. However, one — 17-year-old Vista resident Nancy Gutierrez — joined Newsom for Friday’s drawing.

“They called my mom, and my mom came in and was like, ‘Nancy, you won’t believe it.’ We didn’t believe it at the beginning,” she said.

Because she’s under 18, the prize will be put in a savings account until she comes of age.

“I think most of us want life to go back to normal, and getting the vaccine would definitely help that,” she said. “So I would encourage everyone to get the vaccine.”

The governor’s office also recently released a video featuring one of last week’s $50,000 winners — identified only as “Tony.”

Tony said that getting vaccinated was “super easy” and that the prize money came as a welcome surprise after living on savings for a year and a half.

“I never thought I’d be able to get something like this, but I’m very, very grateful,” Tony said.

Two of last week’s winners — one from San Diego County and the other from Santa Clara County — could not be reached and forfeited their prizes, according to the California Department of Public Health. Officials have since moved on to two alternates, one from Sacramento County and one from Monterey County.

Officials have said the goal of the incentive program is simple: to tempt as many remaining holdouts as possible and push the state closer to the level of longer-lasting community immunity necessary to finally defeat the COVID-19 pandemic.

Having a wide swath of the population inoculated, officials say, will help armor California against any potential new surges — especially come Tuesday, when coronavirus-related capacity restrictions and physical distancing requirements will be lifted at almost all businesses and other institutions.

That same day, Californians who are fully vaccinated for COVID-19 will also be able to shed their face masks in most non-work situations.

“This disease does not extinguish itself,” Newsom said. “We have work to do to get these vaccination rates up, and we have ongoing work to do to make sure it’s done in an equitable manner.”

Though officials have long targeted June 15 as the date for the long-awaited reopening, Dr. Tomás Aragón, state public health officer and director of the California Department of Public Health, issued a new health officer order Friday that will rescind most COVID-19 rules as of that date, with a few exceptions.

For example, those who aren’t fully vaccinated will still need to keep their masks on in businesses and other public settings indoors. And everyone, regardless of inoculation status, will have to mask up while in transit hubs or aboard public transportation; in healthcare settings and long-term care facilities; indoors at K-12 schools, childcare facilities or other youth settings; in homeless shelters, emergency shelters and cooling centers; and in correctional facilities and detention centers.

Organizers of indoor events with more than 5,000 people, such as a basketball game, will also be required to verify that attendees are either fully vaccinated or have tested negative within 72 hours of the event’s start time.

The same will be recommended, but not required, for organizers of outdoor events with more than 10,000 attendees. In those instances, venues will have the option of allowing unvaccinated and untested attendees, provided those people wear a mask at all times.

Workplaces also will still be subject to any relevant rules set by the California Division of Occupational Safety and Health, or Cal/OSHA.

What those standards should be has been the subject of much discourse in recent weeks, with members of the state’s Occupational Safety and Health Standards Board first rejecting, then voting to approve and then ultimately rescinding a slate of regulations that would have required fully vaccinated workers to keep their masks on in certain situations.

Though they haven’t yet been officially released, the latest proposed rules are expected to be consistent with the state’s mask guidance and should go before the board for consideration Thursday.

“We’ll get where we need to go, and I have all the confidence in the world we’ll get there,” Newsom said.

The June 15 reopening will represent the most substantial return to normal since the pandemic began. But as Dr. Mark Ghaly, California’s health and human services secretary, emphasized Friday, “a lot of things change, but not our vigilance. And the contact tracing, disease investigation and outbreak investigation and management is going to be top of mind.”

“June 15 means, to me, a big pat on the back to so many Californians for making sacrifices, you know, rolling with the punches on something that we’ve never seen before, at least in our lifetime,” he said during a virtual conversation hosted by the Public Policy Institute of California.

Nearly 40 million COVID-19 vaccines have been administered statewide, and 68.3% of eligible Californians — those ages 12 and up — have gotten at least one dose, according to data from the federal Centers for Disease Control and Prevention.

However, only about 53.2% of that cohort has been fully vaccinated — meaning they’ve either gotten the single-shot Johnson & Johnson vaccine or both required doses of either Pfizer-BioNTech or Moderna.

Even with millions more Californians having yet to get their shots, the state’s vaccination pace has plunged in the last two months.

At the height of the inoculation campaign in April, providers statewide were administering about 400,000 vaccine doses per day on average, according to data compiled by The Times. The current vaccination pace is less than half that.

Given how many people have already been inoculated, it’s not surprising that fewer doses are going into arms now.

From a mathematical standpoint, fewer people overall remain in the vaccination queue — making it more challenging to sustain the pace seen earlier in the rollout. And from a practical perspective, those who have yet to roll up their sleeves may be hesitant about or resistant to getting the shots, or have run into barriers that prevent them from doing so.

However, officials note that continued slowdowns risk further lengthening the pandemic and that areas with lower levels of vaccine coverage will remain more vulnerable to potential outbreaks.

“While it is possible for us to have a successful reopening even with vaccination numbers slowing down, it would greatly increase our confidence in our ability to keep cases low if we saw greater vaccine uptake,” Los Angeles County Public Health Director Barbara Ferrer said this week.

Though it doesn’t appear California’s 2-week-old incentive program has triggered a flood of new appointments, what had been a precipitous plunge has been momentarily halted and even slightly reversed, according to data compiled by The Times.

Newsom said California is “one of a handful of states” that have seen a recent week-over-week increase in dose administration.

“This program appears to be working,” he said.

But even with that uptick, the latest pace remains well below the rate seen during the week leading up to the reveal of the incentive program, when 188,000 doses were given out daily, on average.