PULLMAN — He came to Washington as a mystery, an unknown quantity, full of promise and just as many questions.

He’ll leave — whenever that happens, but ruefully to Husky fans, it may be sooner than later — as a bona fide legend.

Michael Penix Jr. assured his mythological status in the historical realm of UW quarterbacks, even if it’s a one year-and-done tenure, in the most unambiguous and time-honored fashion: By rising to absolute brilliance in the two games that mean the most to those who favor purple.

Penix, who had already dazzled in a heated win over Oregon two weeks ago, was just as majestic in a frenetic, rousing and hard-earned 51-33 victory over Washington State in the Apple Cup on Saturday night. 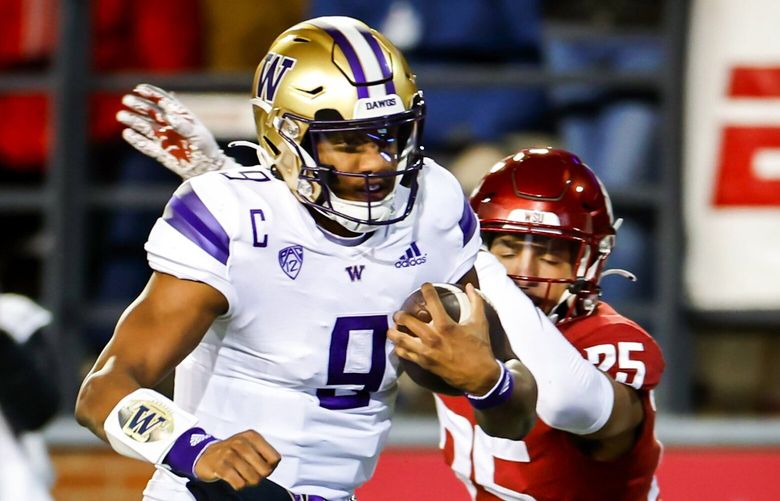 Afterward, Penix grinned and said, “That just shows they have a lot of trust in me,” before pre-emptively sidestepping the unasked question about whether he will turn pro after the season — an increasingly likely scenario as his credentials mount and he keeps adding more and more pro-caliber throws to his scouting tape.

“I just go out there and play my game and have fun,’’ he said. “Whatever happens as far as that, that’s out of my control. If they (fans) feel like that, I guess you could say it’s a good thing. It’s definitely not a bad thing. But I’m just trying to win football games.”

On a day in which the Huskies racked up 703 total yards of offense, had two receivers over 100 yards (Rome Odunze and Jalen McMillan) with another, Ja’Lynn Polk, knocking on the door with 82, plus a 126-yard rushing effort by Wayne Taulapapa, Penix obviously wasn’t a one-man show.

But if you want to pinpoint the biggest reason that the Huskies have made an astonishing turnaround from last year’s 4-8 debacle that was capped with a lopsided Apple Cup loss, you need look no further than the arrival of Penix as a transfer from Indiana.

Well, the hiring of Kalen DeBoer was huge, too, but on the field, it was Penix more than anyone else who made the Huskies soar, quite possibly into a New Year’s Six bowl game.

Penix on Saturday completed 25 of 43 passes for 485 yards and three touchdowns, and rushed for two more scores. One of his few disappointments of the night, in fact, was learning for the first time that the seeming double-pass from McMillan that resulted in a 30-yard Penix touchdown was not ruled to be a pass at all, but rather a lateral and thus officially a rush. Both Penix and McMillan were incredulous when they heard about that ruling in the postgame interviews, Penix believing he had a receiving touchdown and McMillan thinking he had thrown a TD pass.

Penix wasn’t perfect — a third-quarter interception in the end zone from the 11 when Washington was driving for a touchdown that would have eased the considerable tension of what to that point was a taut, back-and-forth game, eliminated that characterization.

But in what has become typical Penix fashion, he came right back after an ill-advised throw and led a vital scoring drive. It featured a 41-yard strike to Polk (to go along with a 47-yard TD pass to Odunze in the second quarter, and an electrifying 78-yard TD to McMillan on the very first play of the second half, among a slew of big strikes).

“I mean, he just keeps coming back,’’ DeBoer said. “Nothing, as far as the situation that you’re in, really fazes him. Even coming out and the first ball of the third quarter, that’s not an easy throw, back across his body, kind of rolling out to the left and firing all the way across and putting it right where it needed to be for Jalen to be able to finish and get a touchdown.

“He just keeps fighting, keeps playing. I know there’s probably a throw he’d like to have back. And that’s part of it. But we can see the response. He continues to do it over and over again, all season long. I mean, he’s one of the best. He’s one of the best out there in the country. And there’s so much belief from the team’s end. He was the one that broke us down going into the fourth quarter and was so passionate. You can tell he’s giving everything he’s got every play.”

It had been a dazzling first half, full of trickery, audacity, and big play after big play as UW clung to a 28-27 lead at intermission.

The two teams combined for 630 yards of offense — a respectable amount for a full game that was jampacked into one half of action, complete with all sorts of heroic offensive showcases, and an extremely limited amount of defense.

There were shovel passes, long passes and punter passes. There was amazing and repeated displays of escapability by Cougar quarterback Cameron Ward, who was on the verge of being sacked time and again yet managed to wiggle and squirm out of danger, usually turning the near-disaster into some sort of backbreaking gain by WSU.

You want a fake punt that turns into a 36-yard completion? WSU did that. You want a pass from Penix to McMillan, then back to Penix, who bolted 30 yards for a touchdown? Check. You want not one, not two, not three, but four fourth-down conversions by the Cougars? Check, quadrupled. The only thing they were short on were punts (one by each team) and stops (you just needed one hand to count them).

Somewhere along the line, it became apparent that an epic shootout was in the works. But DeBoer said he had confidence that the Huskies were going to be the superior second­-half team, based on track record, and that played out with a vastly improved Washington defensive performance in the second half. Only two key turnovers in WSU territory kept the game close before the Huskies pulled away in the fourth quarter.

It was Penix at the forefront, just as he had been in a 408-yard, two-touchdown performance in Eugene. If you lead road victories against your two most heated rivals in a double-digit win season, it stamps you for program immortality, no matter how brief your stay.

“Man, it was amazing,’’ Penix said. “Rivalry games, they’re usually close games, real tough games. Every college football game is tough, but it’s just something about rivalry games. There’s a lot of tension building up to it. We just had to make sure we weathered the storm, controlled our emotion, and just went out and played free and executed at a high level. Once we did that, it was over.”

It may be that the Penix era at Washington will soon be over, with one high-profile bowl game left to enhance his legacy. But the body of work he’s already established will live on.


Larry Stone:
lstone@seattletimes.com; on Twitter: @StoneLarry. Larry Stone calls upon more than 30 years as a sportswriter to offer insight, wisdom, opinion, analysis – and hopefully some humor – regarding the wide world of sports. Topics include the thrill of victory, the agony of defeat, and, especially, the people responsible for either outcome, as well as the wide chasm between.