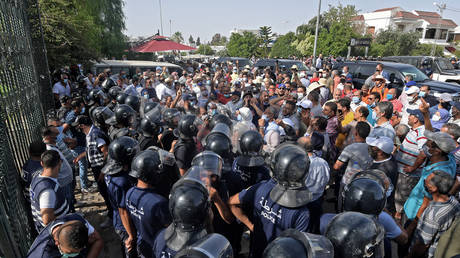 The Qatari state-funded channel said at least 20 armed plainclothes police officers entered its Tunis office on Monday and instructed all journalists to leave.

Al Jazeera quoted its Tunisian bureau as saying that police did not have a warrant, but claimed they were acting under orders from the country’s judiciary. The journalists had their phones and other equipment seized and were not allowed back into the building to get their personal belongings, the channel reported

“We did not receive any prior notice of the eviction of our office by the security forces,” Lotfi Hajji, Al Jazeera’s bureau chief in Tunisia, said.

Reporters Without Borders condemned the raid, calling on authorities to respect the freedom of the press.

The reported raid took place a day after President Saied froze parliament activities, stripped MPs of their immunity, and fired Prime Minister Hichem Mechichi. Saied argued the move was in line with the country’s constitution and necessary in order to “save the state” amid a social upheaval.

Also on rt.com
Tunisian president OUSTS government, warns opponents that ‘army will respond with bullets’ if they try to unleash street violence

Opponents immediately accused the president of launching a coup. Rached Gannouchi, the speaker of Tunisia’s parliament, labeled Saied’s actions as unconstitutional and “illegal.”

Soldiers and armored vehicles were deployed to fend off the protesters from the parliament building, where clashes broke out on Monday. Prevented from entering the compound, Gannouchi and opposition MPs began a sit-in outside the parliament.

Anti-government protests intensified this week in Tunisian cities as people rallied over the handling of Covid-19, economic hardships, and police violence.