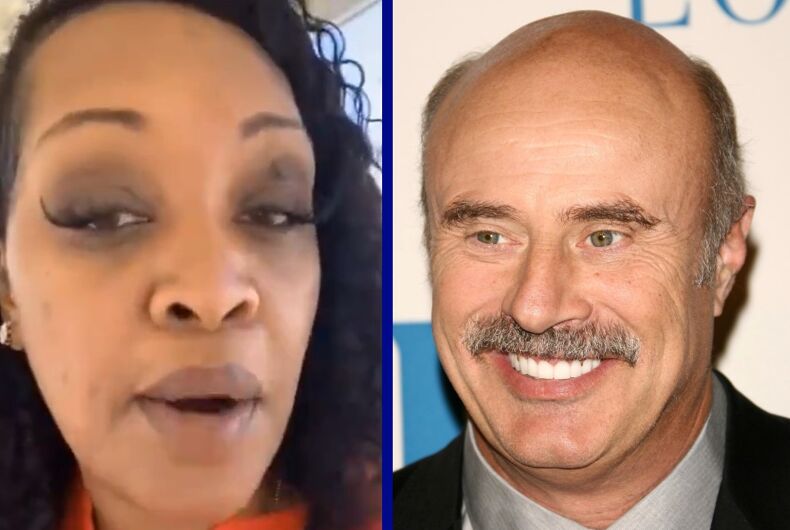 Failed Congressional candidate and Trump-supporter Angela Stanton-King is livid after she appeared on Dr. Phil in an episode to reunite her with her transgender daughter, who she has publicly attacked in the past.

“I’m the bad parent, because they can’t force me to believe that my son is a woman,” she said after a taping of the show. “Fuck Dr. Phil.”

Stanton-King – who is the goddaughter of Rev. Dr. Martin Luther King Jr.’s conservative niece Alveda King – has gone on anti-LGBTQ tirades in the past, but this is one of her most vile.

She has even denigrated her own transgender daughter publicly, saying earlier this year that she “fought for my son & sacrificed to raise him. While his Dad was rotting in prison. Just for him to grow up and decide he wants to be a woman. Seriously wtf.”

A producer for the Dr. Phil show then invited her on in a message that said she would “have a chance to settle your dispute and find a resolution.”

They taped the show on Monday, and it sounds like it did not go well. Stanton-King posted a profanity-laden and offensive rant to social media afterward.

“Fuck Dr. Phil. Fuck his mother-fucking wife,” the QAnon supporter ranted. “Fuck goddamn Paramount studios. Fuck all you other crazy dumbass sons of bitches that think a dick is somehow magically turned into a pussy.”

Angela Stanton King, a Republican candidate for Congress in Georgia in 2020, has a transgender child. They taped an episode of “Dr. Phil” yesterday and judging by the vile rant she unleashed after, it did not go well. pic.twitter.com/1f7MXgo9hN

Noted transgender activist Ashlee Marie Preston was also invited for the episode “to offer expertise and help in facilitating the healing process between mother and trans daughter,” she wrote on Instagram.

“But sometimes when the education is rejected, things can get hectic.”

In another part of her rant, Stanton-King called Preston a “tr***y,” referred to her as “sir,” and attacked her for not having biological children.

Stanton-King also posted to Instagram, sharing a screenshot of the producer inviting her on the show. Apparently she thought that Phil McGraw would try to help her “find resolution” with her daughter but somehow not say anything about how she rejected her daughter.

“They are liars pushing their agenda of turning as many black men and boys as they can into women,” she wrote about the show’s producers.

She wasn’t done. On Twitter, she wrote another screed attacking her daughter using incredibly disgusting language.

“I’m not letting anyone convince me that I should support the castration of my own son,” she wrote on Twitter. “The Enemy can’t have him, the perverts can’t have him.”

She then went on tirades against anyone who contradicted her in the comments and her account was suspended shortly after.

Stanton-King was pardoned by Donald Trump for her federal felony conviction on conspiracy charges related to her role in a car theft ring before she ran for Congress in Georgia’s 5th District as a Republican.

She got some attention on the right and was part of a coalition of Black Trump supporters, and she spoke at the Conservative Political Action Conference (CPAC) earlier this year.

“PEDOPHILIA,” she wrote on Twitter above a photo of Zaya. “Gay means Men having sex with men. If you wouldn’t want your 12 yr old daughter advertising that she enjoys sex with men/boys why your 12 yr old son? This is confusion, pedophilia, and sexual exploitation wrapped up in acceptance.”

It’s not clear if Stanton-King’s daughter had already told her she was transgender at that point.

In a separate Instagram post, Preston brought another perspective to the episode, writing that Stanton-King’s actions show “why you need to show up for Black trans women.”

“Who do they think takes care of Trans and queer identified young adults and youth, when their families discard them?” she wrote. “I may not be able to birth children but I have mothered and mentored more people in this life than I can count. I have the stretch marks on my heart to prove it…❤️ I am not afraid of [Stanton-King] nor her Maga following. Given the recent onslaught of anti-trans legislation happening across the country; I’d say I’m just getting started.”

“So this is what black culture is pushing to our youth now?” Stanton-King tweeted. “Sex with everything and everyone including yourself? Is lil nas x tonguing himself down? #BlackCulture #MerryChristmas”

“Just say ur turned on and go,” Nas replied.

Conservatives are out to stop cancel culture. They should look in the mirror. / LGBTQ Nation