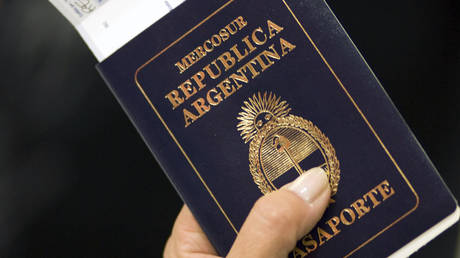 Argentina will start issuing gender-neutral passports to non-binary citizens, becoming the first Latin American country to do so. The cards will feature an ‘X’ in place of the traditional ‘M’ or ‘F’ gender descriptors.

The issuance of the first gender-neutral passports was announced in a decree by President Alberto Fernandez on Tuesday, with a public announcement expected on Wednesday morning.

Argentina’s Gender Identity Law was passed in 2012, and allowed citizens to change their gender without first undergoing psychiatric evaluation or physical transition. It also allowed them to identify as a non-binary third gender, though official documents such as ID cards, passports and tax forms still required them to choose from male or female.

According to Fernandez’ decree, the new ‘X’ options will stand for: “non-binary, indeterminate, unspecified, undefined, not informed, self-perceived, not consigned; or another meaning with which the person who does not feel included in the masculine/feminine binomial could identify.”

Argentina will be the first country in the region to issue such gender-neutral travel documents, though other countries around the world have done so for some time already. Certain US states allow non-binary people to identify as “X” on driver’s licenses or other forms of ID, and several European countries record the rare percentage of intersex births as a third category on birth certificates. The Netherlands issued its first gender-neutral passport in 2018 to a woman who was born intersex, raised male, and eventually transitioned to female, but still identified as intersex.

Pakistan and Nepal, however, have recognized a third gender on their official documents for more than a decade. Pakistan issued national ID cards to transgender people, intersex and eunuchs (khwaja sara) since 2009, and Nepal has allowed citizens to identify as an “other” gender on official identification since 2007.