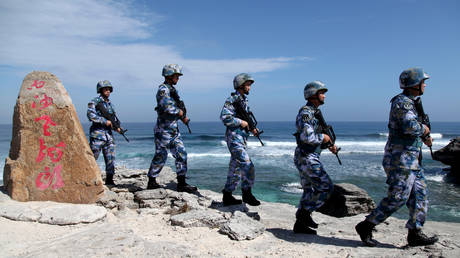 The US Defense Department has accused Beijing of undermining international law after the country tightened regulations for foreign vessels entering its territorial waters amid the tensions in the South China Sea.

“The United States remains firm that any coastal state law or regulation must not infringe upon navigation and overflight rights enjoyed by all nations under international law,” John Supple, a Pentagon spokesperson, said, as quoted by the South China Morning Post.

Unlawful and sweeping maritime claims, including in the South China Sea, pose a serious threat to the freedom of the seas, including the freedoms of navigation and overflight, free trade and unimpeded lawful commerce, and the rights and interests of South China Sea and other littoral nations.

The statement from the Pentagon came after Beijing updated its maritime regulations, requiring certain types of foreign vessels to report ship and cargo information when entering China’s territorial waters. The new rules apply to submersibles, nuclear vessels, and ships carrying potentially dangerous cargo, such as oil, liquefied gas and other toxic chemicals.

Also on rt.com
US VP Harris tells Vietnam to ‘raise pressure’ on Beijing, as Chinese media accuse Washington of sowing divisions in Asia

China’s state-run Global Times newspaper linked the change to maintaining the country’s national security along its maritime borders. Beijing argued in the past that its actions were in strict accordance with international maritime law.

The US and China often accuse each other of raising tensions and provocative behavior in the region by conducting naval drills. Last week, Beijing sent warships to sail near Japanese waters right after Tokyo completed a joint drill with the US, UK and the Netherlands, which included British aircraft carrier HMS Queen Elizabeth.

“China is firmly opposed to the US deployment of maritime law enforcement forces in the South China Sea to meddle in regional affairs and disturb regional peace and stability,” China’s Foreign Ministry spokesperson Wang Wenbin said at the time.