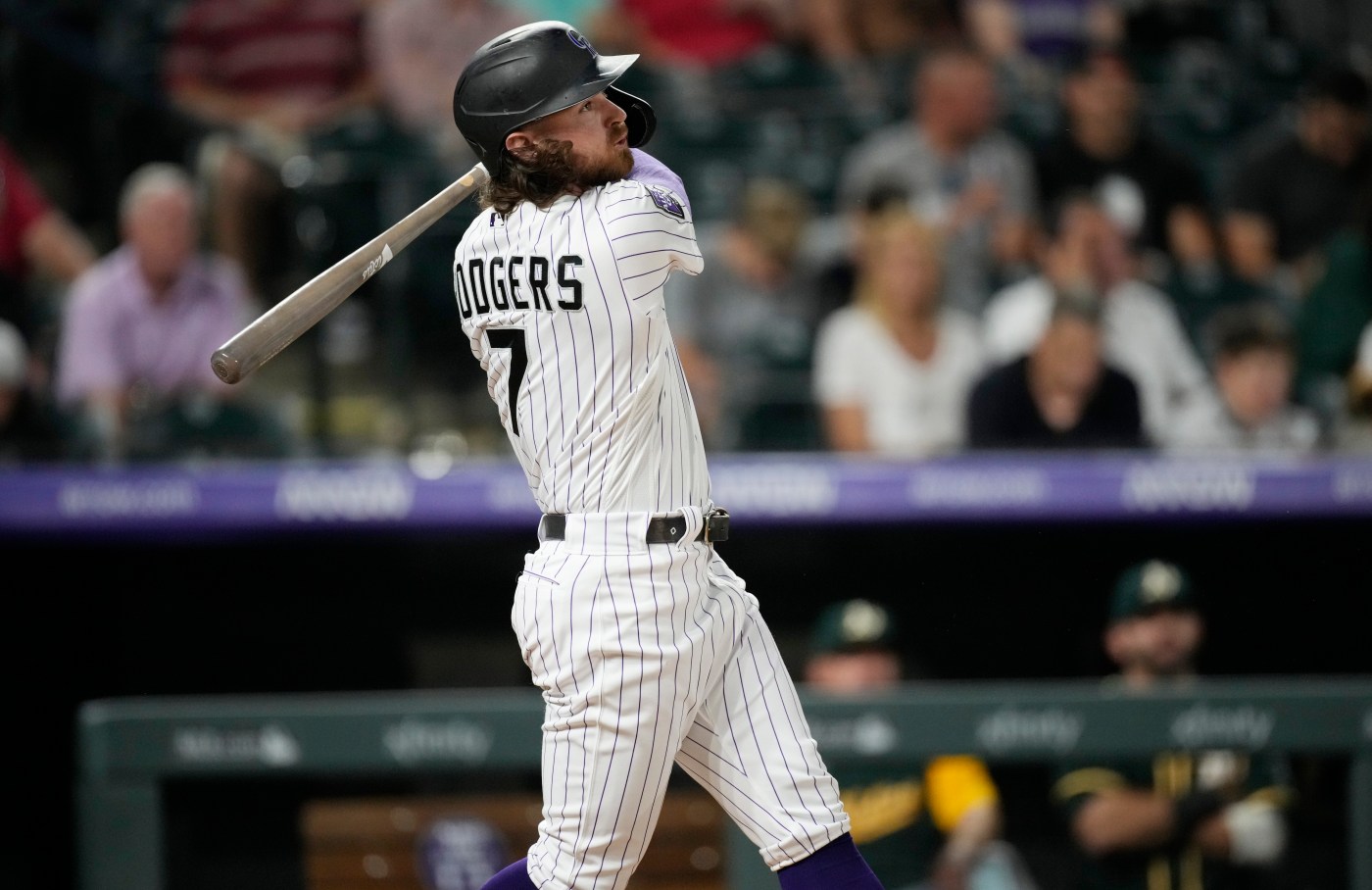 It was a long time coming for Brendan Rodgers, but he hit the first home run of his major-league career Saturday night at Coors Field.

Unfortunately for the Rockies, Rodgers’ homer came in the seventh inning of a 6-3 loss to Oakland.

His two-run, pinch-hit, 419-foot shot to center arrived in his 45th major league game and his 137th at-bat. It was a sky-high blast that bounced off the top of the center-field wall and into the Coors Field forest.

“It was a big weight lifted off of my shoulders,” said Rodgers, who got the home run baseball and planned on giving it to his parents. “It has been a long time coming, and longer than I would have expected when I first made my debut. I’m glad I got it out of the way.”

For the sake of posterity: Rodgers hit a first-pitch, 94.9 mph fastball off Oakland lefty reliever Jesus Luzardo and drove in Elias Diaz, who had reached on a single.

Rodgers said he was glad that the ball didn’t bounce into the pond beyond the center-field wall. “I didn’t want it to get waterlogged,” he said.

Manager Bud Black said Rodgers’ homer was part of his evolution into a big-leaguer.

“I’m glad he got it. And looking over his progression the last few years, I know that he’s been pressing a little bit,” manager Bud Black said. “The other night when he got a double and drove in a couple of runs, you could see him exhale. We just need him to relax and go play. There is talent in there and it’s going to show.”

The home run cut the A’s lead to 5-3, but they rebounded with a run in the ninth off Tyler Kinley, who gave up a triple to pinch hitter Tony Kemp and a single to Mark Canha.

Rodgers, the third overall pick in the 2015 draft and Colorado’s top prospect while he worked his way up the minor-league ladder, endured shoulder surgery in July 2019 and a hamstring injury in spring training this year that kept him out of action until May 21.

Little wonder that his teammates greeted him like a conquering hero when he got back to the dugout.

“I think guys realized the external pressures that have been on Brendan because of the prospect status,” Black said. “They know how hard he’s trying, maybe at times, to live up to this. They understand that feeling, so when a guy hits his first homer, they feel happy for him.”

Colorado’s starting rotation has been very good at home this season, but left-hander Kyle Freeland did not keep that trend going as Colorado lost its second straight to the A’s.

Freeland, making his third start since coming off the injured list, was not sharp. That was clear in the first inning when Canha led off with a double, setting up Matt Olson’s two-run homer to right.

A traffic-filled fifth inning, which included singles by Pinder and Jed Lowrie and a sacrifice fly by Chapman, extended Oakland’s lead to 5-1.

The Rockies scored a run in the first off lefty Cole Irvin, stringing together a leadoff double by Raimel Tapia, a sacrifice bunt by Yonathan Daza and a run-scoring single by Charlie Blackmon. Tapia, who’s heated up again after a nasty slump, went 2-for-5 and has hit six doubles in his last four games.

Irving, who entered the game 3-7 with a 4.12 ERA, blanked Colorado for the next five innings, finishing with a fine line: six innings, one run, six hits, five strikeouts and one walk.

Manager Bud Black contends that Marquez, when he’s on point, has the stuff to be one of the best pitchers in the National League. After a rocky start to the season, he’s starting to pitch up to Black’s expectations. Marquez is coming off of a seven-inning gem against Texas in which he allowed one run on two hits, struck out seven and walked two. Marquez is 3-1 with a 4.33 ERA and five quality starts at Coors Field this season. He’s faced Oakland three times, going 2-1 with a 2.66 ERA, 22 strikeouts and six walks. Kaprielian is coming off his shortest start of the season, pitching just 3 2/3 innings and allowing four earned runs and walking three against Seattle. In the start prior to that, also against the Mariners, Kaprielian tossed seven scoreless innings, giving up just two hits, striking out four and walking two. He’s never faced the Rockies. The right-hander missed most of the 2016 season with an elbow injury and then missed both the 2017 and ’18 seasons after undergoing Tommy John surgery.

New Yorkers being paid to get vaccine

The Propaganda War (And How to Fight It)

Is it possible to identify pre-symptomatic and asymptomatic COVID-19 clinically?