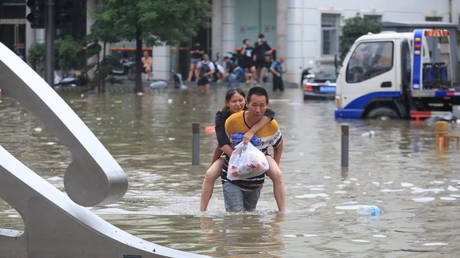 The emergency response level in China’s Henan province has been raised to the second-highest tier by authorities, as the worst rainfall in a thousand years continues to pour down on the region.

Chinese authorities increased the emergency status to Level II in the central province on Wednesday. The Ministry of Emergency Management dispatched 1,800 firefighters from nearby provinces, equipped with over 250 speedboats, to aid in the recovery mission.

The Ministry of Emergency Management has dispatched 1,800 firefighters from nearby provinces to support the heavy-rain-pounded capital city Zhengzhou of central China’s Henan province. pic.twitter.com/NkEjd2k4wV

Torrential rainfall and storms will continue to pour down on Henan throughout Wednesday and Thursday, with some regions likely to see up to 280 millimeters of precipitation daily.

A meteorologist speaking to local media has described the extreme flooding in Zhengzhou, Henan’s capital, as a “once-in-a-thousand-years” phenomenon. The equivalent amount of the region’s yearly precipitation fell on the city in just under three days until Tuesday.

At least 12 people lost their lives when the Zhengzhou metro was flooded, while some 500 have been rescued.

Henan is a busy transport hub, and the severe flooding led to major disruptions of bus services and car traffic. As a result, many people flocked to use Zhengzhou’s metro, with riders later wading in water levels up to their shoulders after the flooding hit.

The region still remains heavily affected by the flooding, with some key infrastructure still closed. Some 29 expressways and eight highways were closed on Wednesday morning. Flights were also suspended, leaving over 1,000 passengers stranded as no inbound flights were able to land in Zhengzhou until noon local-time, according to Shanghai daily.

As of 7am today, 29 sections of 29 expressways have been shut due to heavy rainfalls in central China’s #Henan Province. Another 8 national highways, 8 provincial highways in Henan were closed due to flooding or landslides. Strong rainfall is still continuing. pic.twitter.com/humm1UkDma

Some 20,000 soldiers of China’s People’s Liberation Army and armed policemen flocked to the Yihetan dam in the ancient city of Luoyang to prevent its banks from bursting, as there were reports on Tuesday evening that it “could collapse at any minute.”

Two dams in China’s Inner Mongolia province collapsed on Monday, flooding 20,000 hectares of land. Hebei, a neighboring province to Henan, has also been put on an orange alert over similar weather conditions.

Several Chinese companies, insurers and banks joined forces and have pledged nearly $300 million in emergency funds for swamped Henan on Wednesday. Among the list of donors are Chinese companies such as Alibaba, tech-giant ByteDance, as well as three local branches of the Agricultural Development Bank of China.

Can the UK stamp out racism in its policing?

What Car Are You Surprised Hasn’t Died Yet?