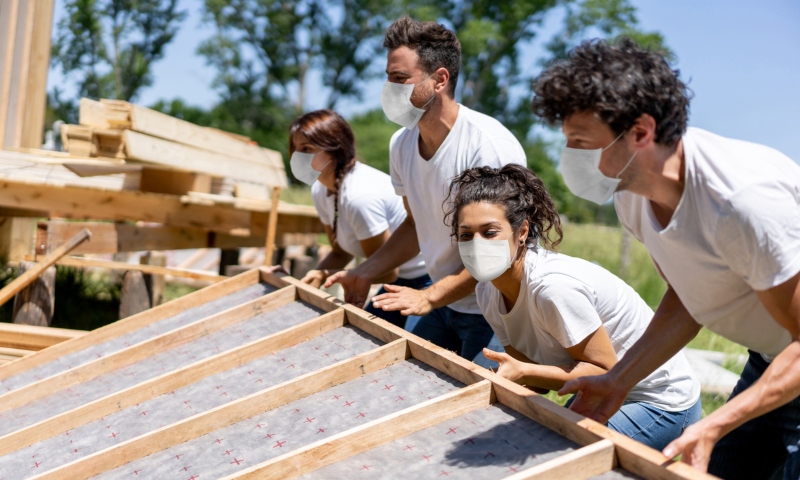 Tensions were running high at PDX Commons, a cohousing community for adults 55 and older in Portland, Oregon. Several people wanted to keep visitors off-site until all 35 residents were vaccinated. Others wanted to open to family and friends for the first time in a year.

How do communities with dozens of members decide what to do during a public health crisis when members have varying tolerance for risk and different opinions about safe practices?

Cohousing communities have grappled with such questions throughout the coronavirus pandemic. These are groups of people committed to communal living who own homes in complexes with shared common areas, such as clubhouses, laundry facilities and gardens.

This past year, these communities have been a godsend for many residents, with ongoing virtual activities and a sense of camaraderie that has shielded them from the relentless loneliness and boredom that have traumatized so many older Americans.

“All you have to do is go out on your porch and someone will come and sit with you,” said Elizabeth Magill, 60, who lives at Mosaic Commons in Berlin, Massachusetts, with her husband, Ken Porter, 70. “I can’t imagine not being in a place like this during the pandemic.”

But now, as the country emerges from over a year of lockdowns, percolating differences among residents about appropriate precautions have been heightened as people long to return to normalcy — and expand outside their “pod” of the community.

“You have this tension between personal freedom and respect for other members of the community,” said William Aal, a Spokane, Washington, consultant who recently advised PDX Commons about strategies to improve communication.

There are 170 such communities across the country and an additional 140 under development, according to the Cohousing Association of the United States. About two dozen are for older adults; the others are intergenerational. On average, communities have about 30 units occupied by people who live alone, couples or families.

The pandemic upended their rituals, as in-person activities and communal dining — typically offered several times a week — were canceled and relationships sustained by regular contact began to fray.

“It’s created all kinds of challenges for community living,” said Mary King, an organizational consultant and a resident of Great Oak Cohousing in Ann Arbor, Michigan.

Disagreements have arisen over everything from when residents should wear masks (outside in common areas? should children be required to wear them?) to how laundry rooms should be used (sign-ups for one family at a time, with what kind of cleaning precautions before and after?) to whether visitors are welcomed, with what restrictions.

“Some people have felt at super-high risk and have wanted to take really strict precautions, while others have felt ‘This is no big deal, it’s going to blow over,’” said Karin Hoskin, a resident at Wild Sage Cohousing in Boulder, Colorado, and executive director at the national co-housing association.

Because residents are independent homeowners, some feel they should be able to do whatever they want. Yet cohousing communities see themselves as more than a collection of individual homeowners and typically adopt policies by consensus.

On the positive side, communities have adopted strategies to keep residents safe and connected during the pandemic. Great Oak Cohousing, an intergenerational community, created a buddy system for each resident, with one or two people who would check in regularly. King said one resident became seriously ill from covid, and “a couple” of others had mild cases.

The advent of vaccines has inspired an even more complicated round of conversations: Should common areas reopen as residents become fully vaccinated? What level of vaccination in the community provides enough protection? What about residents or visitors who decline to be vaccinated?

“We’ve talked about how we’re not going to require vaccinations for somebody to participate in meals, because there are people who will not be vaccinated, whatever their reason is, and we need to be OK with that,” Hoskin said of her Boulder community.

At PDX Commons in Portland, most residents have been eager to set aside strict policies adopted when the pandemic took hold last year. Unlike many other cohousing communities, PDX members live in the city, in a single, U-shaped building with shared entrances, with three floors of condominiums facing an inner courtyard.

A sleek two-bed, two-bath unit is currently on the market for $595,000, with homeowner association fees of about $550 a month. Social interaction is a selling point. This one, the listing says, is “in the center of the action.”

Out of an abundance of caution, the PDX covid committee decided early on that no family members or friends could come inside the building. A discussion of how to host visitors outside took four months to resolve, provoking frustration. Strict cleaning and sanitation protocols were seen as overbearing.

“We were lectured many times on washing hands, and it didn’t feel very good,” said Karen Jolly, 75, who moved her 95-year-old mother into her two-bedroom condo for much of last year rather than leave her alone in an independent living facility.

“The rules we created were too controlling, too restrictive, too much telling people what to do,” said Dr. Karen Erde, 68, who sat on the emergency covid committee, which was disbanded last summer after residents objected. They did work, however: PDX has not reported any covid cases, Erde said.

Claire Westdahl, 75, couldn’t tolerate being apart from three young grandchildren and moved from her PDX condo to a tiny home put up on her son’s Portland property from May through October. She’s since decided to sell her condo and move in permanently with her son’s family.

“The lockdown forced people to make some really deep choices about what they valued and how they wanted to live,” said Westdahl, a widow. “My deep choice is I’m here to be a grandma.”

Like other seniors, she’s deeply aware of time lost during the pandemic and doesn’t want to wait even a few more months before reuniting with friends and family. “Turning 75 really changed my sense of time,” she said. “I don’t know how much I have left and what I have is precious and I’m not going to waste it.”

That sense of urgency, shared by other PDX residents, fueled difficult discussions over when and how to open up the community in March as most residents became fully vaccinated but three younger members still hadn’t gotten shots.

“We’ve protected older members who have some pretty significant risk factors and, now that those people have been vaccinated, it’s a turnaround — they have to protect us,” said Gretchen Brauer-Rieke, 64. Since we first spoke, she’s received one shot of the Pfizer-BioNTech vaccine and expects to get the second in early May.

At a meeting in early April, Brauer-Rieke and several others proposed a compromise: Visitors would be allowed back into PDX if they wore masks, were met at the door by a member and escorted to a residence, and avoided common areas inside the building.

This new policy has been delayed, temporarily, as Multnomah County, which encompasses Portland, has moved into a “high-risk” covid category. It isn’t what everyone wanted, but it’s something they can all live with.

And that, ultimately, is what cohousing is all about. “How do we deal with tensions in our community? We talk it through. We have workgroups. We compromise,” said Janet Gillaspie, 65, a PDX co-founder. “And we think about what’s best for the community as opposed to ‘What do I need?’”

Your Brain Plays ‘Tricks’ to Sync Sights and Sounds

Gwyneth Paltrow's "Off the Rails" Quarantine Involved Whiskey Every Night

Selena Gomez Says Most Of Her Relationships Were Cursed