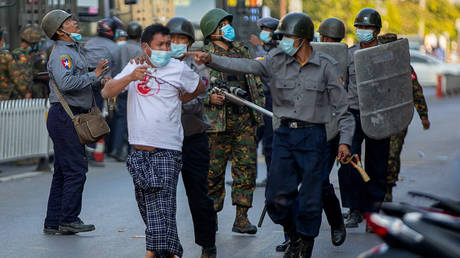 The Assistance Association for Political Prisoners (AAPP) have reported that over 1,000 civilians have been killed in Myanmar since the military overthrow in February.

On Tuesday, Myanmar-based activists AAPP reported on Twitter that 999 civilians had been “killed by the junta.” On Wednesday morning, they confirmed with Reuters that the figure had reached 1,001, a number which the group’s secretary, Tate Naing, said should actually be “much higher.”

They also said that 7,320 people had been arrested and 5,712 are currently detained or sentenced since the February coup. According to their reports, there are 1,984 evading arrest warrants.

Later on Wednesday, the activists, who claim to be working to secure the release of political prisoners in Myanmar and fight for the protection of human rights, released a statement on the July “junta perpetrated massacres” in Kani Township. The AAPP claim that 43 civilians were killed and provided images of dead bodies, which they assert is photographic evidence of crimes against humanity.

The statement and accompanying images were later shared by the Network for Human Rights Documentation, who claimed the junta had committed crimes which are in “serious violation of international law.”

Thousands of protesters have been consistently taking to the streets against the military rule, resulting in violent clashes. The UN has been calling on the junta to allow the peaceful demonstrations to proceed. While the generals have offered pardon to protesters, few believe this is genuine.

Also on rt.com
‘It’s a set-up’: Many activists in Myanmar remain unconvinced by junta’s offer to pardon protesters

On the six-month anniversary of the military coup led by General Min Aung Hlaing, Human Rights Watch Asia official Manny Maung stated that the Myanmar military had committed a number of abuses against its population that amounted to crimes against humanity, saying: “UN & governments should coordinate a response that holds these crimes to account.”

The military junta have consistently claimed that reported civilian death tolls are exaggerated. Earlier this month, they announced in a televised address that they would rule the country until at least 2023. The junta also announced the formation of a new caretaker government with General Min Aung Hlaing as prime minister.

The junta took control of Myanmar on February 1 after overthrowing the democratically elected National League for Democracyparty led by Nobel Prize Laureate Aung San Suu Kyi. The coup was justified by claims of fraud in the 2020 November elections.

Aung San Suu Kyi – who is not free from human rights abuse accusations herself, regarding the Rohingya genocide – has been charged by the junta with sedition, amongst various other crimes, and could spend the rest of her life in prison.

Mexico sues US gunmakers, but will it make a dent in trafficking? | Andres Manuel Lopez Obrador News

Taliban have been looking for me, says ex-Afghanistan bank governor