Defining the Difference Between Mezcal and Tequila

Mexican spirits mezcal and tequila are cultural icons generating massive interest, investment, and increased share of the worldwide alcohol market. Much like Scotch, vodka, and gin, where the agave spirit has been crafted and how is becoming just as important to consumers as the taste and price.

Casual liquor lovers and cocktail drink sippers may not know what separates mezcal and tequila. Both are distilled from cooked agave pinas, but there are different varieties of agave species, differences in taste, regulation, production, and bottling that make mezcal and tequila unique from each other.

The following article will help you understand the differences between each product, and help you figure why styles and price differ between seemingly similar expressions.

See more about – Beginner’s Guide: How to Drink Tequila 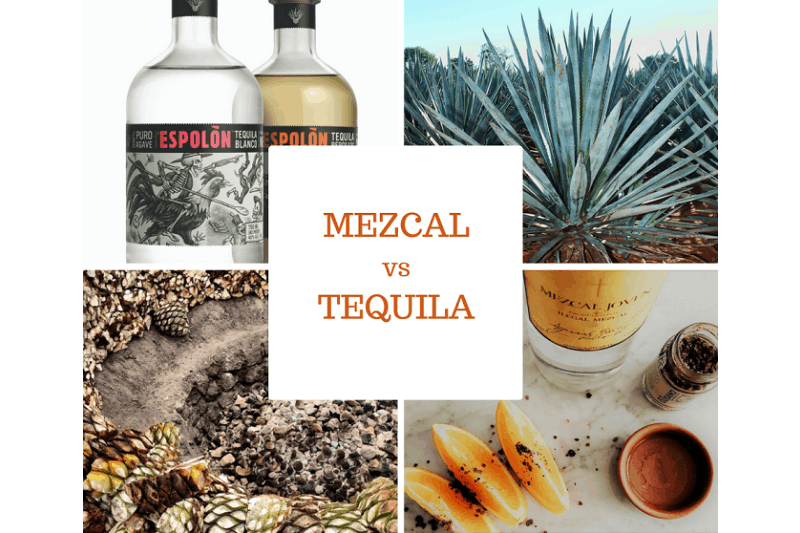 Tequila is a distilled spirit made only from the agave tequilana weber or blue agave plant. Mezcal (or del maguey) is produced from any agave varieties, which include espadin, tobala, tepeztate, arroqueno, and tobaziche, although there are approximately 30 that can be used for distillation.

The word mezcal comes from Nahuatl Mexicali, which means “oven cooked agave.” Mezcal forms part of the rapidly growing alcohol sector focused on traditional “terroir” and techniques of production. While tequila is also doing this, the differences in traditional production between the two spirits are quite different.

Mezcal vs Tequila: Why do they taste different? 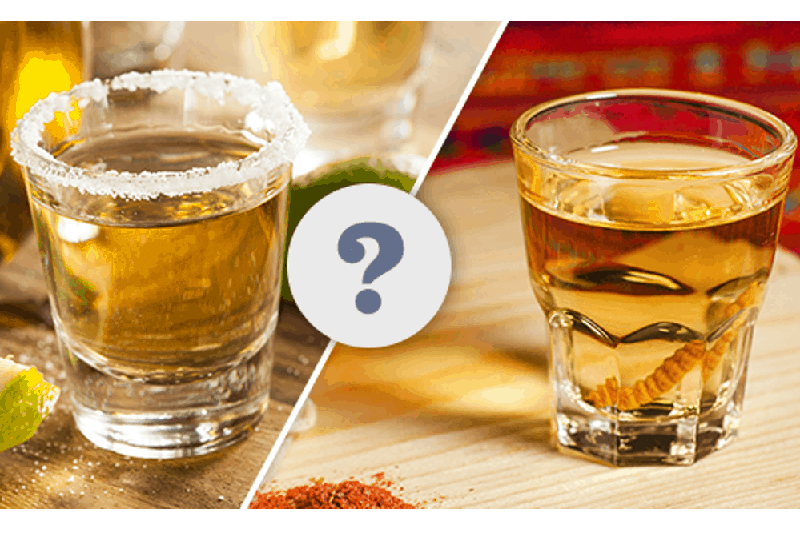 From an alcohol by volume perspective (ABV), mezcal and tequila are bottled at the same strength. Due to differences in agave varietals, their preparation, and distillation, mezcal has the reputation for tasting stronger, particularly when compared to Blanco and Joven tequilas, which are predicated on clean and crisp blue weber agave flavor.

Mezcal’s rustic production comes from around 30 different agave varieties – resulting in an earthier, smoky flavor than the spirits crafted from the blue agave plant. Tequila is most often produced by steaming the agave inside industrial ovens before being distilled two or three times in copper pots.

Mezcal is more old school, using traditional earthen pits that are lined with lava rocks and filled with wood and charcoal, where the agave pinas (agave hearts) are cooked before being extracted, then fermented and distilled in oak barrels, clay pots, or small copper pot stills.

Why is mezcal more expensive than tequila? 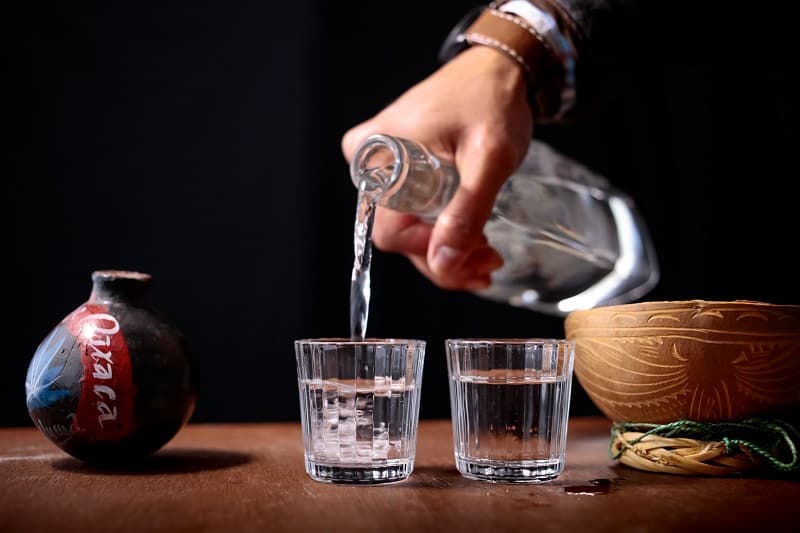 Mezcal tends to be more expensive than tequila because of the old school, labor-intensive production methods, as well as the scarcity of a lot of the wild agave plants used to make the spirit. Mezcal is produced in small batches by more artisanal distilleries and lacks the export cost advantages tequila enjoys from being able to be produced in larger quantities. 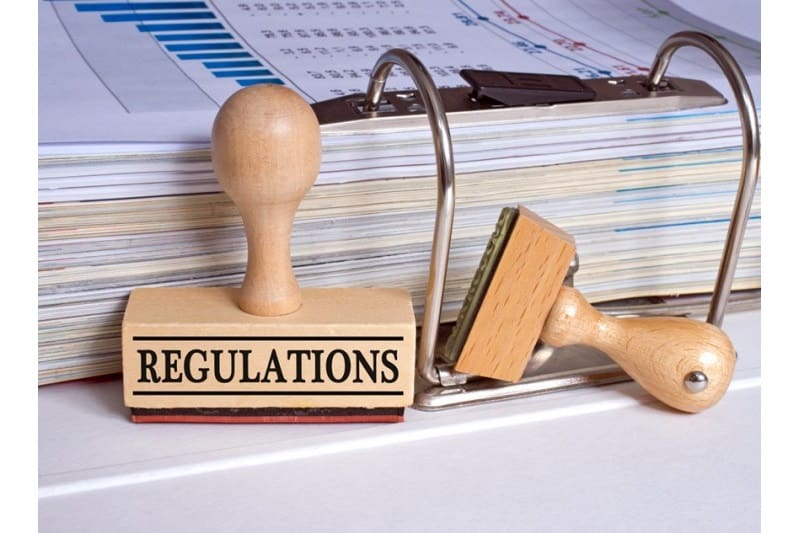 Tequila is carefully protected by a Denomination of Origin (DO) which allows for the production of tequila in selected Mexican states: Jalisco, Michoacan, Tamaulipas, Nayarit, and Guanajuato.

Mezcal is also protected by a DO and can only be produced in the following states:  Oaxaca, San Luis Potosi, Michoacan, Guerrero, Durango, Tamaulipas, Puebla, Zacatecas, and Guanajuato.

In tequila production you can use only one particular species of agave, however, for mezcal, you can use any type. This gives a Mezcal producer a larger range of flavors to choose from in crafting their spirit.

Mezcal bottling must also occur at the palenque (distillery) at which it is made to ensure the quality of each bottle.

As a prized export product and Mexican cultural icon, there are many regulations in place that ensure the quality of taste and production for tequila. The Norma Oficial Mexicana (NOM) specifies the official standards that must be kept for any product to be named tequila, which is then certified by the Consejo Regulador del Tequila (CRT).

To be classed as tequila there has to be a minimum of 51% blue weber agave in the bottle, and alcohol by volume (ABV) must be between 35% and 55%.

Always try to look for 100% agave tequila expressions – you’ll find that statement on the bottle. These are premium tequilas that are exclusively bottled in Mexico and strictly monitored by the CRT.

For other tequilas, known as mixto tequila, the other 49% can be additives such as sugars. They might be sold in bulk to then be packaged outside of Mexico. You’ll find cheap supermarket brands and pre-mixes are made with mixto tequila.

The first regulations for mezcal were introduced in 1994 in article NOM-070-SCFI-1994 (Spanish document). Like tequila, guidelines regulating production have been put in place to protect mezcal’s unique place in Mexican culture, and the methods of its production.

Mezcal can only be made from 100% agave with no additives or other products and must be bottled between 36% and 55% ABV. 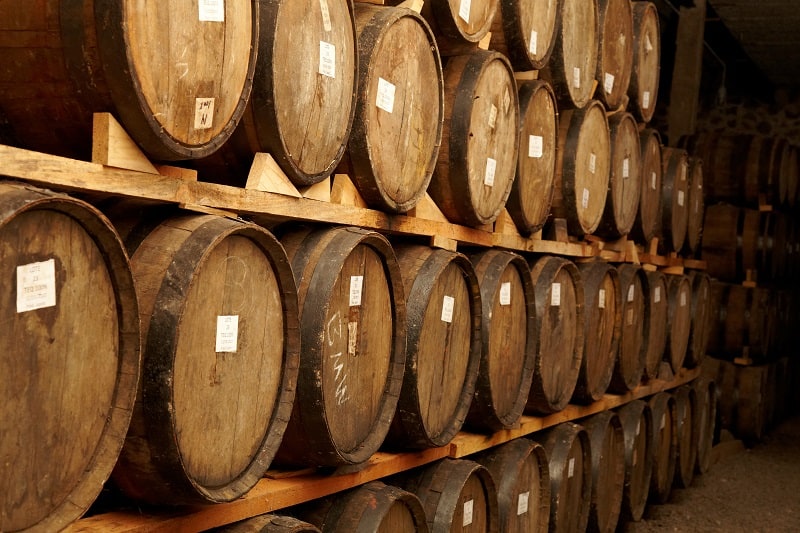 The production of tequila is divided into seven steps:

Each step of the process is closely regulated by the CRT to ensure general tequila standards are met and followed to guarantee maximum quality. Each tequila distillery has its own source of agave, proprietary processes, quality control, and distillation/storage techniques that will affect the tequila’s taste. 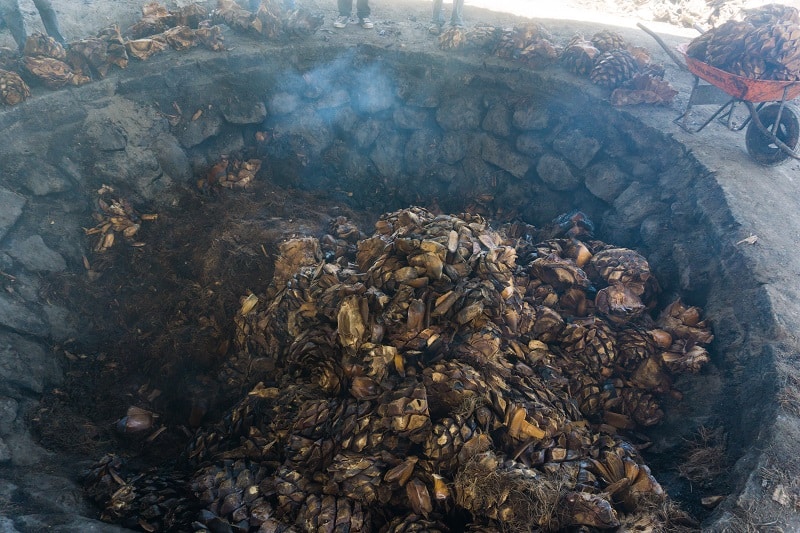 The traditional way of baking an agave for every method is in a conical earthen pit called a Horno de Tierra. Mezcal regulations also allow for brick ovens (Artisanal, Mezcal) and autoclaves (Mezcal).

The next phase is extraction, usually done with a large milling stone called a Tahona wheel that is pulled by a horse or donkey. Other appropriate methods include Chilean or Egyptian mills, simple mallets (ancestral), trapiches (artisanal, mezcal), or shredders (mezcal).

When producing ancestral and artisanal mezcal, containers of wood, clay or masonry tanks, animal skins, hollows in stone, earth, or tree trunks, must use maguey fibers in the fermentation process. The more advanced mezcal process can use stainless steel tanks during fermentation.

The final part of mezcal production before bottling is distillation, which breaks down as follows:

The Different Varieties of Tequila 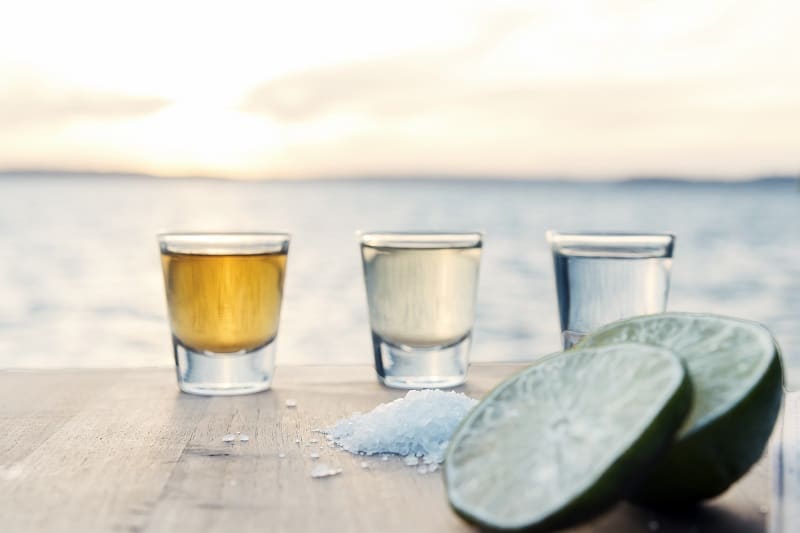 How you plan on drinking tequila will help determine the type of spirit you wish to purchase. There are three main types of tequila; Blanco, Reposado, and Anejo.

You’ll also find Joven (in between Blanco and reposado), cristallino (color removed), mixto tequila (the stuff you use for frozen drinks), and extra Añejo tequila (matured longer) available as well.

Blanco or silver tequila is unaged tequila that tastes more of the agave plant and citrus than longer maturing tequila versions. It’s the go-to for cheap drinks and the lead-in product for most tequila producers.

Reposado (rested) and Anejo (aged tequila) offerings are darker in color, aged in barrels, and gain a heavy but smoother flavor from the distillation process. They are recommended for neat sipping for experienced mixologists looking to craft a specific taste.

The Different Varieties of Mezcal Agave 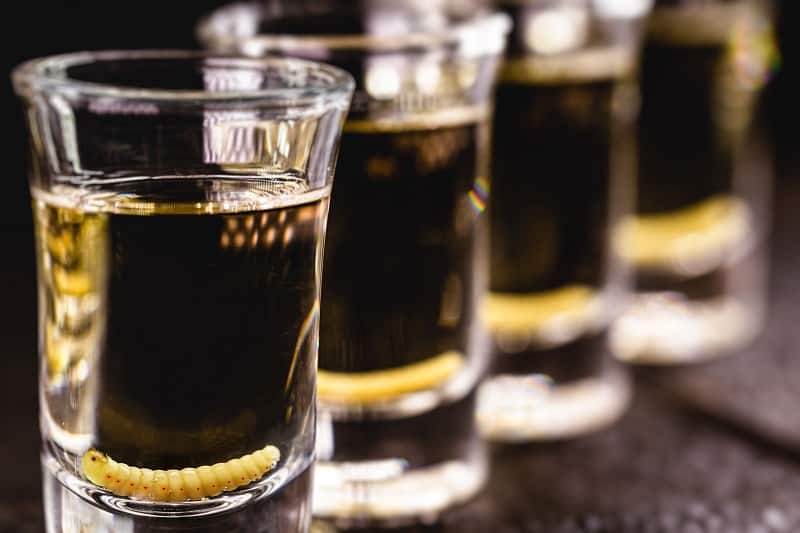 While mezcal applies some of the tequila terminology above (especially agave espadin mezcals), the different kinds of agave species used, in combination with production methods are often the most useful way of differentiating between expressions.

Agave Espadin is the most common – utilized in around 90% of production – and the one closest to blue weber agave genetically. You’ll find a lot of similarities between tequila and espadin mezcals from an initial flavor and versatility perspective.

Tobala is a rare variety of agave that is wild harvested. It relies on birds and bats to spread its seeds through pollination, which makes it one of the most highly-priced mezcals

Tepeztate is another rare variety harvested wild and can take up to 30 years to reach maturity. They can be recognized by bright yellow blooms at the top of their tall stem or Quijote. They are known for being the most intense of agave flavors.

There are other agave varietals, such as arroqueno, cureata, and salmiana, all with their own personalities that can be used in crafting different tasting mezcals. You may also find ‘ensamble’ mezcals, which are a collection of different agave varieties distilled into an expression.

While closely related, mezcal and tequila have distinctly different identities and personalities based on how they are made, and with which type of agave. Pricing-wise, basic tequilas are cheaper, while old-school mezcal is more expensive due to the cost of harvesting and distillation.

The post Defining the Difference Between Mezcal and Tequila appeared first on Next Luxury.

DMX Made One of Hip-Hop’s Greatest Love Songs, Too

Chelsea show great heart to bounce back against Porto

Tuchel explains why emphatic Chelsea response was never in doubt

Officer Near Minneapolis Kills Motorist, and a Crowd Confronts the Police