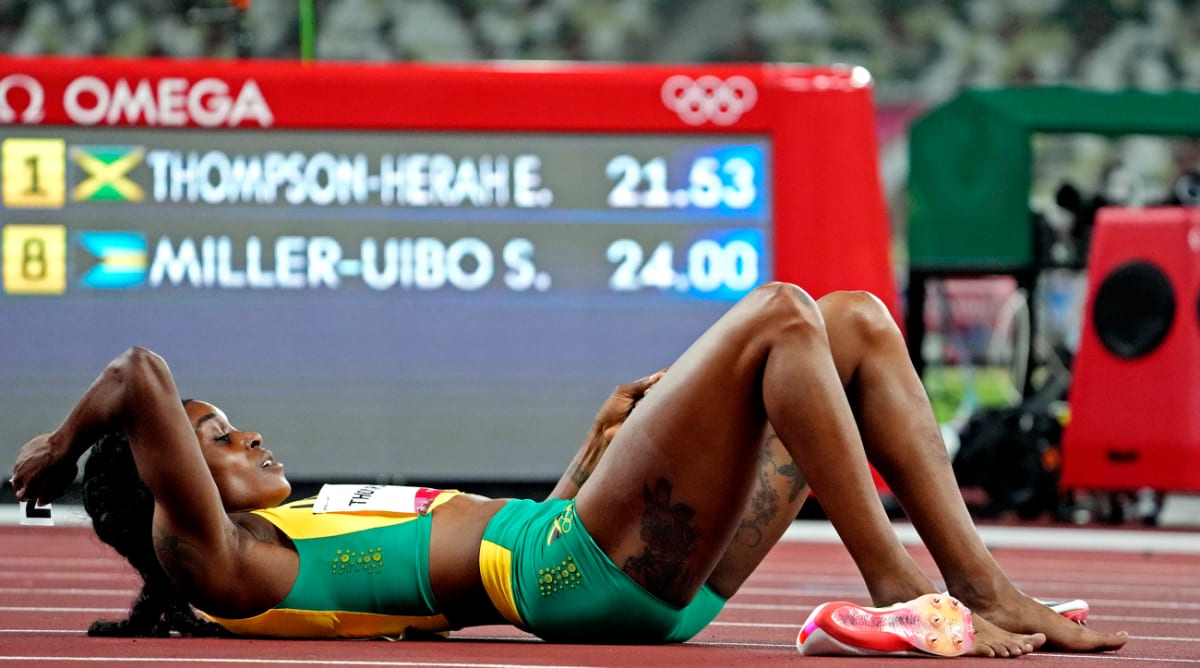 “It feels amazing to win two golds again. I have had a rough week. I haven’t slept after the 100m final,” Thompson-Herah said.

“Honestly I am so tired,” Thompson-Herah said. “My legs just need some rest. I’ve done so many races in the last few days, but I am very grateful.”

Mboma, 18, took silver in 21.81 to break the U-20 world record that she set in the semifinals. Mboma was barred from competing in the women’s 400 meters after World Athletics tested her and her compatriot Beatrice Masilingi and found they had high levels of natural testosterone in their bodies. World Athletics has a testosterone regulation that bars women with naturally high levels from competing in events from the 400 meters to the mile. This is the same rule that prevented South Africa’s Caster Semenya from defending her Olympic title in the 800 meters. According to the Associated Press, Mboma did not comment on her ban from the 400 meters in Tokyo.

Thomas earns the first Olympic medal of her career, with a bronze in 21.87. Thomas was in the conversation for the gold medal after her 21.61 victory at the U.S. Olympic Trials, which was good enough to put her as the second-fastest woman in history at the time. At 24 years old, Thomas has time on her side to make another Olympic run for gold.

“It feels amazing because I really worked for that one,” Thomas said. “I fought tooth and nail over those last 30 meters. I gave it my best effort and I am really happy that effort came out with a medal.”

Thompson-Herah won the women’s 100 meters in 10.61 on July 31, which broke Florence Griffith-Joyner’s Olympic record and led a Jamaican sweep of the medals. She now sits behind Griffith-Joyner’s 10.49 and 21.34 world records on the all-time list for 100 meters and 200 meters.

• Katie Ledecky Isn’t Done Yet
• Mykayla Skinner Wins Unexpected Silver on Vault
• U.S. Swimming Dominates at Olympics
• Mixed Events Are Perfect for the Olympics. More Sports Need to Get In on It

Almost Half Of All New Cars Sell In Ten Days