by lewlewmedia
in LATIN NEWS
0

Not least, Chinese investment in Perú composes an essential part of those relations. Wang told his Peruvian counterpart that “China seeks to expand trade and investment in Perú.” In response, Landa said Perú is “ready to deepen cooperation with China in various fields.”

But what does increased Chinese investment mean for the Andean country?

Often, Chinese infrastructure projects do not bode well for South American countries. Mines, ports and other projects across the continent have damaged local infrastructure, provoked indigenous protests and caused environmental degradation. And Perú is no exception. Rather, it is the rule. Many Peruvian academics, environmentalists, and ordinary citizens are therefore wary of additional Chinese involvement in their country.

One Chinese project above all others has attracted unremitting criticism. Since its inception, Las Bambas — Perú’s second largest copper mine — has been a hotbed of protest and controversy. It can serve as a bellwether for what more Chinese investment in Perú may mean.

What is Las Bambas?

Las Bambas is a copper mine in Perú located in Apurímac in southern-central Perú.

Situated more than 4,000 meters above sea level, Las Bambas contributes around 1% of Perú’s GDP and makes up 15% of Perú’s entire copper production. The mine is owned by a consortium of Chinese companies, the majority shareholder being China Minmetals Corporation (China MMG), a subsidiary of the Chinese state-owned Minmetals Corporation. The MMG-led consortium bought Las Bambas in 2014 from the Swiss-owned company, Glencore Xstrata, for 5.85 billion USD. According to MMG, Las Bambas has a life expectancy of 18 years and contains more than 7.2 million reserves of copper.

Why has Las Bambas been so controversial?

After an exploratory period, commercial operations officially began at Las Bambas in 2016. But preparation for the mine began more than a decade ago. In 2011, indigenous groups who lived in areas surrounding the mine were relocated so exploration and excavation of the land could begin. According to a leader of the Fuerabamba people, his community made a deal to leave their land in exchange for receiving some benefits from the mining—benefits which have allegedly yet to be fulfilled.

Protests against the copper mines first began in 2011. Tensions, though, really began to boil over four years later. In September 2015, more than 15,000 protesters descended on Las Bambas. Calling for a larger share of the mining profits, more local employment opportunities, and better environmental protection, the protesters moved onto and occupied land owned by the mining project. This move caused a clash between police and protesters which resulted in the death of at least four people. And so began a seven year struggle against Las Bambas which continues until today.

There have been incidents of unrest and controversy every year since the wide-scale protests against Las Bambas first began. In 2016, a 42-year-old man was killed by police after partaking in a road blockade in protest of heavy dust caused by MMG trucks. In 2017, Reuters published a troubling report of villagers who expressed discontent, depression, and hopelessness after being relocated to a new village built by MMG. That same year, a state of emergency was declared in three districts in Apurimac due to indigenous protests and blockades. In 2018, villagers attempted to block trucks from entering the mine by throwing stones. 2019 also saw protesters resort to violence as helicopters transporting government ministers were attacked by villagers wielding stones. The ministers were sent to placate protesters who were calling on MMG to pay for the right to use their roads.

MMG reports that in total, these disruptions have caused more than 400 cumulative days of interruptions. Each day of unrest at the mine causes 9.5 million USD in losses, according to Perú’s National Society of Mining, Petroleum, and Energy.

What is currently happening at Las Bambas?

This year, the problems at Las Bambas continue unabated. Indigneous communities have not stopped using road blockades as a tactic to force MMG and the Peruvian government to the bargaining table. 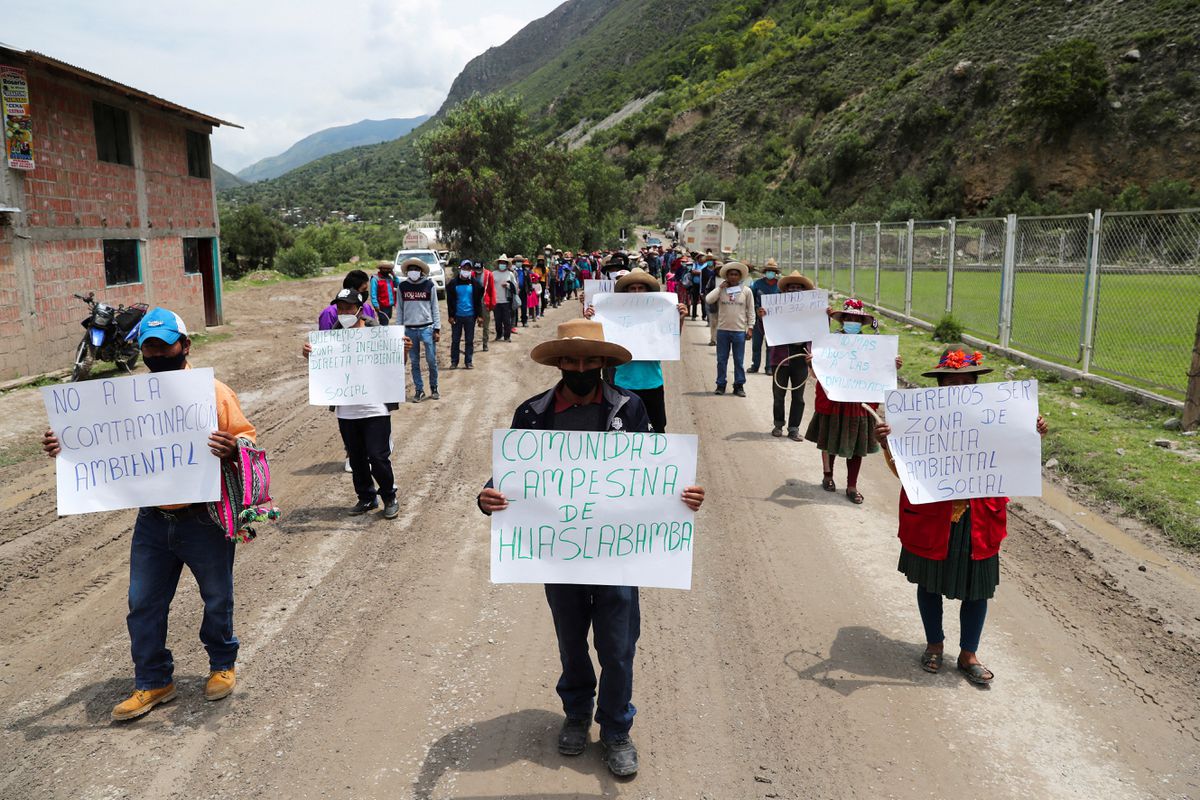 These protests have caused Las Bambas to shut down for weeks at a time and eventually, to announce a slowdown of operations at the mine. In November of this year, MMG announced that it has been operating at 30% capacity due to the blockades (despite a consortium of Chinese copper companies recently expressing a need for more mining to boost international supply).

“We have been forced to begin a progressive slowdown of our operations since Oct. 31,” MMG said in a statement. “There is also the threat of new interruptions to our Las Bambas operations in the very near term.”

This has all led Perú’s executive branch to create a working group between MMG and indigenous communities. The purpose of this working group is to monitor the agreements between the parties. It has until December 31st of this year to resolve this intractable conflict.

Are there other Chinese projects in Perú?

Since 2014, China has been Perú’s largest trading partner and in 2019, Perú signed a Memorandum of Understanding (MoU) with China on the Belt and Road Initiative (BRI). Initially called “One Belt, One Road,” the BRI is Xi Jinping’s signature foreign policy which aims to strengthen Beijing’s ties with countries around the globe through substantial investing in infrastructure projects. Perú officially joining the BRI signified the country’s intention to continue to allow significant Chinese investment in infrastructure projects around the country.

Indeed, other than Las Bambas, China has at least 25 other investments and construction projects in Perú, totalling billions of dollars. Some of these projects include a 3 billion dollar port which locals say is destroying their town and a road which puts uncontacted Amazonian people at risk.

Given that Chinese investment in South America could exceed 700 billion USD by 2035, PRC projects in Perú are expected to multiply. And if Las Bambas is any indicator, future Chinese construction in the land of the Incas may face similar controversy and trouble.

Jacob Kessler is a freelance journalist based in Peru. He covers international LGBT news, Chinese influence in South America, and other human rights issues. He is a graduate of Hunter College and speaks Spanish, Portuguese, Chinese, and English.