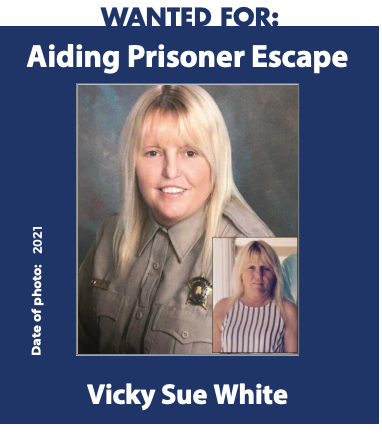 Can the Vicky White-Casey White escape case provide insight as to why correctional officers are compromised?

Data from the US Department of Justice states that 69 percent of staff sexual assault allegations with male prison inmates involve female correctional employees.

In juvenile facilities, in most-serious incidents of staff sexual misconduct, an estimated 91% of incidents involve only female staff.

When I was the director of public information for the Maryland Department of Public Safety (a combined law enforcement and corrections agency), I spent a lot of time in correctional facilities. I saw firsthand the difficult and immensely taxing jobs of correctional officers.

This article was created to support my seventh appearance to discuss crime issues and the escape on the nationally syndicated Armstrong Williams Show.

Vicky White, an Alabama jail correctional supervisor with an unblemished record and near retirement helped Casey White (no relation), a convicted serial offender escape from jail.

She was the assistant director of corrections for Lauderdale County and a 17-year veteran of the sheriff’s office. Vicky White and Casey White had known each other since at least 2020, the sheriff told CNN earlier this week. Casey White was at the county jail facing a homicide charge.

In 2020, he allegedly confessed to the 2015 stabbing death of 59-year-old Connie Ridgeway and was charged with two counts of capital murder. He pleaded not guilty by reason of insanity and was brought to the Lauderdale County’s detention center to attend court hearings in the case, authorities said. There, he came into contact with Vicky White.

While there are no allegations of a sexual relationship between the two while incarcerated, data from the Bureau of Justice Statistics of the US Department of Justice state that:

In juvenile facilities, in most-serious incidents of staff sexual misconduct, an estimated 91% of incidents involve only female staff.

It should be noted that, based on the data, sexual relations between correctional officers and inmates are rare:

The issue is female correctional officers engaged in willing yet inappropriate relationships with the criminals they supervise.

From ABC News: Gender appeared to play some kind of role in the nature of the banned relationships, as 84 percent of the relationships that female staffers had with inmates “appeared to be willing,” whereas only 37 percent of the relationships between male guards and inmates qualified as such, according to the report. Although the inmates are supposed to be monitored 24/7, Miller said, that it’s “very easy” for a female corrections officer to have sex with an inmate inside a prison, ABC News.

From CNN: Casey White’s criminal history dates back a decade. Court documents alleged he beat his brother in the face and head with an axe handle, landing him in prison in 2012 for more than three years. Then in 2015, he carried out a crime spree including a home invasion, carjacking and a police chase, according to the Marshals Service. In March 2016, he was indicted on 15 counts and was ultimately convicted on seven of those counts, including attempted murder and robbery, according to Alabama records. He had been serving a 75-year prison sentence on those charges, CNN.

Vicky White had to know that Casey White had a long and violent criminal history. This wasn’t White’s first attempt to escape, nor was it the first time he had gained the trust of correctional officials. In 2020, while White was being held in Lauderdale County’s detention center, authorities learned he planned to escape the jail and take a hostage.

From CBS News: The investigators interviewed family members and co-workers, examined financial and other records and learned from other inmates that Vicky White had a “special relationship” with Casey and the two were involved in a “jailhouse romance,” officials have said. Weeks before the escape she sold her house for $95,000, far below the market value, sold her car and filed for retirement, Keely said. She had also bought an AR-15 rifle and a shotgun to add to her 9mm service weapon and a .45-caliber pistol investigators believe she had.

Other clues also emerged: She bought men’s clothes at a local Kohl’s store and had also visited a store that sold sex toys.

They also learned Vicky White left the jail with Casey White previously in what investigators believe was a dry run for the escape, two law enforcement officials told the AP. She’d taken him out of the jail for about 40 minutes, the officials said. The officials spoke on the condition of anonymity to discuss details of the investigation, CBS News.

First, we need to understand that the Bureau of Justice Statistics data regarding staff sexual assaults are self-reports from incarcerated juveniles and adults.

The research is part of the National Prison Rape Statistics Program, which collects administrative records of reported sexual violence, and allegations of sexual victimization directly from victims, through surveys of adult inmates in prisons and jails and surveys of youth held in juvenile correctional facilities.

Background-Growth Of Women In Corrections

30 percent of correctional officers are women per the Bureau of Labor Statistics. Non-BLS sources put the percentage at 40 percent. Per BLS, 50 percent of parole and probation agents are women.

Per Zippa (a statistical site) there has been little growth in the percentage of female correctional officers. From 2010 to 2019, approximately 37 to 38 percent were women.

Female applicants pass rigorous background and drug tests while male applicants often fail, a reason why so many metro area correctional facilities are staffed by women.

From The Baltimore Sun: But there are states and local correctional systems where the majority of correctional officers or parole and probation agents are women. Women account for almost two-thirds of the corrections officers at some Maryland institutions, a proportion that illustrates how heavily the system has come to depend on them.

And they have been in the spotlight recently, after federal authorities charged 13 female officers in an alleged corruption scheme at the Baltimore City Detention Center. Tavon White, a leader with the Black Guerrilla Family gang, impregnated four correctional officers, according to federal indictments. Investigators say White — who has pleaded not guilty to the charges — and other gang members targeted female officers to aid in a smuggling scheme. say. They work with men who are angry, mentally ill. Some can’t read or write. Many excel at manipulating people, Baltimore Sun.

There are no simple answers for any breach of security by correctional officers. There’s no simple explanation for Vicky White. But it’s something that has correctional and law enforcement administrators concerned.

We need to acknowledge that the data on sexual assaults in correctional facilities are inmate self-reports and the vast majority were unsubstantiated. The motives of the inmates “may” be suspect.

This is a difficult topic to address. The professional life of a correctional officer is far more complex and dangerous than most acknowledge. They deserve our respect and admiration.

But anyone who has worked in corrections will tell you that inmates run prisons to a degree. It’s not unusual for one correctional officer to supervise a hundred inmates (or more) on a tier. Correctional officers are unarmed. They make a living supervising people with mental illness, tragic histories of child abuse, often with brain damage, PTSD, and long (mostly violent) criminal histories.

Within this environment, if inmates want to take over a tier or refuse to lock in, or refuse to return from the yard, there’s little to stop them beyond calling in swift reaction teams. The perimeter, however, is secured by extensive fencing and armed personnel.

Correctional officers MUST interact with inmates with verbal tact and discipline, something that female officers often excel at. That means that all officers will get to know inmates. It doesn’t mean that the “relationship” should be personal or unprofessional, but a relationship exists regardless. Knowing when an inmate is uncharacteristically acting out is a warning sign that trouble is brewing. But you have to “know” the inmate for this to be of value.

The first thing to understand is that everyone in prison has a collective best interest in keeping the peace. I have never been concerned as I walked unescorted through multiple correctional facilities. I felt safer in prisons than on many streets in Baltimore or D.C. But prisons have the capacity to blow up at any time for an endless number of reasons.

Inmates feed correctional officers information all the time about impending violence between inmate groups or individuals. They fear the inevitable lockdowns or loss of decent food or visits or privileges or access to schools or prison jobs. They don’t want disruptions to their lives. They choose correctional officers who they “like” and provide warnings, often saying that if staff didn’t take care of the impending situation, they will take matters into their own hands.

We raided a medium-security prison during pre-dawn hours with hundreds of tactical correctional officers and state troopers when inmates and staff warned us of pending violence and corruption.

Every correctional officer goes through a comprehensive background and criminal history-drug checks. They are extensively warned during training that inmates will attempt to manipulate them in very subtle ways and once a correctional officer has been compromised, then the inmate announces that he has “caught” the officer violating the rules and asks for more, like drugs or a cell phone or he will tell the officer’s supervisor which would result in discharge.

But why do some correctional officers violate their training and engage in unprofessional relationships? That’s an impossible quest. Some do it out of “friendship.” Some do it for protection. Some do it for personal or religious reasons (yes, there are multiple religious groups in prisons). Media articles on Vicky White and interviews with friends, family, and coworkers all indicate shock and distress but no explanations for her actions.

Yes, there is an endless amount of abuse heaped on all correctional officers by inmates, but the bulk of it viciously falls on female officers. Inmates can be endlessly sexist and threatening.

If you Google “female correctional officers and sexual misconduct,” there are multiple articles addressing specific cases. Several suggest that female officers (or staff) entered into sexual or inappropriate relations with male inmates as a form of protection. But when an estimated 91% of incidents involved “only female staff” in juvenile facilities, the reasons why get far more complicated.

I have profound respect for female (and all) officers. Whether they represent law enforcement or corrections, they take considerable abuse from many. Some are much better than their male counterparts. But I had multiple conversations with female police and correctional officers and their stories always seemed to involve an unnecessary degree of conflict based on their sex.

But the bottom line is that any sexual or personal misconduct, regardless of the sex of the officer, is criminal and poses a security problem for correctional facilities. It’s an issue that few are willing to discuss.

We need to study the Vicky White case exhaustively. There are lessons for the rest of us.