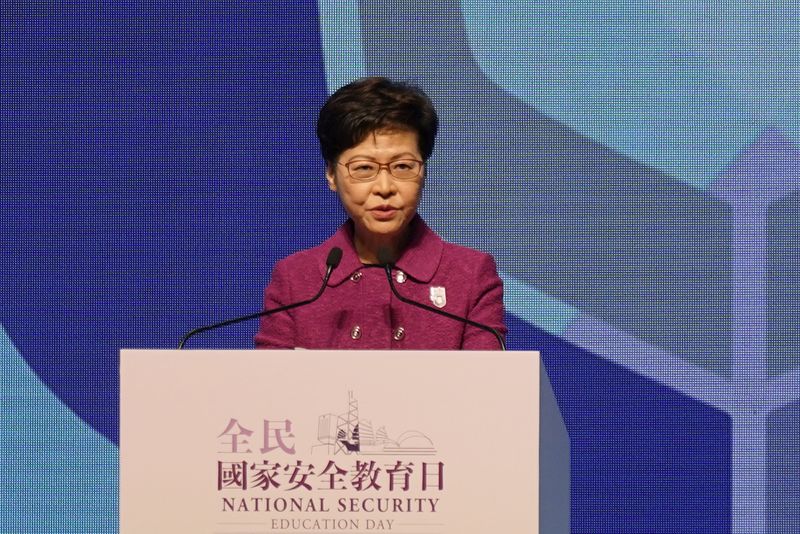 
HONG KONG (Reuters) – Hong Kong will continue to invite foreign judges to its courts and the city’s legal system remains “hard as a rock”, Chief Executive Carrie Lam said on Tuesday amid international concern about the impact of a sweeping national security law.

Worries over the ability of Hong Kong’s judicial system to uphold human rights while applying the new law independently intensified last week when the judiciary said British judge Brenda Hale would step down from the top court next month.

Hale, Britain’s former Supreme Court president, is one of 13 overseas non-permanent judges on the Court of Final Appeal, whose presence has long been seen as a symbol of the rule of law after Britain returned its former colony to China in 1997.

Lam, speaking at her regular weekly news conference, said she would not speculate on Hale’s reasons for stepping down when her three-year term expires.

“But I believe the judiciary in Hong Kong is as hard as a rock,” she said. “The chief justice will continue to invite experienced overseas judges” to Hong Kong courts.

The judiciary said last week Hale did not wish to have her appointment extended “for personal reasons”.

In remarks made to a recent legal seminar in Britain, Hale said Hong Kong’s legal system “is functioning in accordance with the rule of law, at least as far as commercial law is concerned”.

“The jury is out of course on how they will be able to operate the new national security law. There are all sorts of question marks up in the air,” she said.

Hong Kong’s foreign judges stem from an arrangement established at its 1997 handover to help maintain its credibility as an international financial hub.

They come from common law jurisdictions like Britain, Canada and Australia and serve as non-permanent members of the court, which means they are called on periodically to sit on cases.

The current president of Britain’s Supreme Court, Robert Reed, is also on the Court of Final Appeal and has met British Foreign Secretary Dominic Raab to discuss the situation under the new law.

Reed told a House of Lords’ panel in March he would not be prepared to serve or nominate any of his judges to serve if there was “any undermining of the independence of the Hong Kong judiciary”.

Australian judge James Spigelman resigned last September, citing the law in a comment to Australia’s national broadcaster. Other foreign judges have since extended their terms or joined the court.

75 Sayings to Up Confidence in Your Beautiful Natural Self!