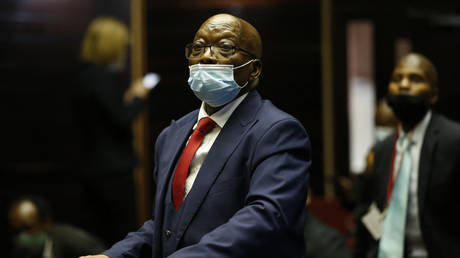 South Africa’s Constitutional Court has ruled that the country’s former president, Jacob Zuma, should serve 15 months in prison for contempt of court after he refused to cooperate with and appear at a corruption inquiry.

Zuma refused to appear at the corruption inquiry earlier this year, despite the presiding judge demanding he give evidence. The former president’s legal team argued he did not have to testify, citing a series of technicalities.

“Mr. Jacob Gedleyihlekisa Zuma is sentenced to undergo 15 months’ imprisonment,” the judge stated, issuing the court’s order, and gave him five days to surrender to police.

The corruption inquiry judiciary had previously filed an application with the Constitutional Court, requesting that Zuma be sentenced to two years behind bars for contempt of court after he refused to attend or provide affidavits.

The former leader repeatedly denied any wrongdoing throughout his nine-year term, which began in 2009 and ended with his ousting in 2018. The charges center on claims that he allowed several prominent businessmen to exploit state resources and wield undue influence over government policy.

A spokesperson for Zuma told South African media that he would be issuing a statement later today, but did not provide any further information about his response. The former president has in the past claimed he was being “vilified” and unfairly accused of being “the king of corrupt people.”

1.8 million homes to be upgraded to superfast broadband