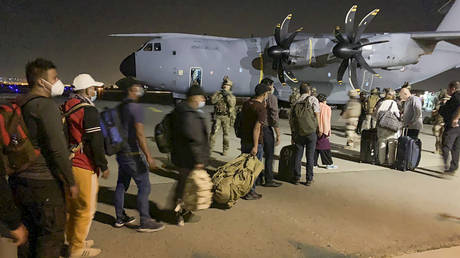 French Prime Minister Jean Castex has stated that his country will cease evacuations from Afghanistan after Friday, citing America’s plan to proceed with a full withdrawal from the country by the August 31 deadline.

Speaking on RTL radio on Thursday, Castex stated that his country “will no longer be able to proceed with evacuations from Kabul airport” from Friday evening due to the impending departure of US troops, who have secured the airport, from the country.

The US has pushed ahead with plans to meet its August 31 withdrawal deadline despite calls from G7 allies to remain at the airport longer to ensure a safe evacuation process can continue. According to Pentagon estimates, there are more than 10,000 people currently waiting to be evacuated at Kabul airport, with around 88,000 having already been airlifted to safety.

President Emmanuel Macron’s administration alone has, so far, managed to evacuated over 2,000 Afghan residents and a hundred French citizens from the war-torn country following the Taliban’s takeover on August 15.

On Wednesday, the Pentagon stood by its decision to withdraw in the next few days, stating that its mission will be over by August 31, at which point securing “the airport will not be our responsibility.”

The decision from France to bring evacuations to an end comes as the US, UK, and Australia warned of an “imminent attack” on Kabul airport, telling people to vacate the surrounding area and stay away from the evacuation hub. While the countries did not provide specific details about the threat, UK Armed Forces Minister James Heappey stated on Thursday that “very, very credible” intelligence sources believe Islamist militants are planning a “highly lethal attack” on the airbase.

Geographies of fear: Letter from America | US & Canada

Afghanistan airlift rescue: Thousands of refugees arrive at US airbase in Germany