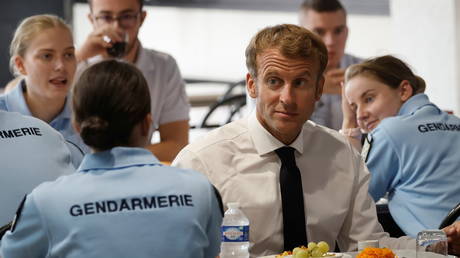 The French president has said that the country is moving to modernize its police force, increasing the number of boots on the ground while looking at ways to monitor the conduct of law enforcement officers.

Speaking on Tuesday at the National Police School in Roubaix, President Emmanuel Macron said he wanted to introduce a new law for internal security to help the gendarmerie modernize through to 2030. The speech came after months of consultation with the police on the topic of security and relations with the public.

Macron said he wanted to see the simplification of aspects of criminal law, claiming both police and magistrates were losing time because of complex procedures, and the creation of fixed fines for illegal occupations of land by Travellers. The ministry of justice has been given three months to simplify the procedures, he stated.

Macron also announced the introduction of an online complaints system by 2023. In theory, the move would remove the need for lengthy appointments in police stations.

Also on rt.com
France leads the way in holding Covid incompetents to account for their mismanagement and indecision as millions died

The president also wants to double the presence of law enforcement officers in public places and announced plans for the creation of a reserve force for the police, which will be staffed with 30,000 reservists. In order to achieve these new goals, Macron said that the Ministry of the Interior would be granted an additional €1.5 billion in 2022.

Macron also talked about the creation of a parliamentary control body that could provide some level of oversight for monitoring the conduct of law enforcement. He insisted that transparency was of the utmost importance.

The national security consultation has brought together unions, law enforcement officials, elected officials, magistrates and members of civil society since February. It was launched following the beating and heavy-handed arrest of music producer Michel Zecler last November in Paris.