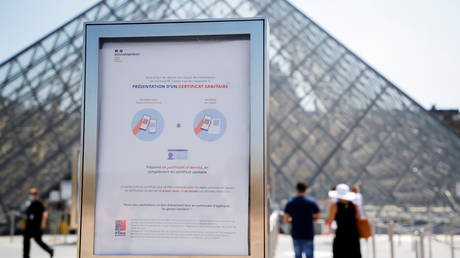 Prime Minister Jean Castex has warned that France is in the middle of a fourth wave of the pandemic as the Delta variant spreads through non-vaccinated citizens, with that cohort of the population comprising 96% of new cases.

Speaking on French television on Wednesday, Castex raised concerns about the Delta variant, referring it to as “the majority one” in the country, due to its “more contagious” nature.

Defending the decision to roll out a Covid health pass across France, Castex cited how 96% of new infections recorded on Tuesday were people who had not yet been fully vaccinated against the virus.

Supporting the prime minister’s remarks, Health Minister Olivier Veran told the nation’s lawmakers that there had been an unprecedented rise in cases recently –  an increase of 150% in the past week – due to the prevalence of the Delta strain.

The health pass has faced opposition across France, with tens of thousands of people taking to the streets in a number of French cities to call President Emmanuel Macron’s administration a vaccine “dictatorship.” One of Macron’s own lawmakers, Pacôme Rupin, claimed the “health pass is going to fracture our country.”

The pass was introduced in an effort to reduce the spread of Covid infection while avoiding plunging the country back into a nationwide lockdown. Under the measure, access to many leisure and cultural venues in France is currently restricted to those with proof of vaccination, a negative test result, or recent recovery from Covid. Lawmakers are debating whether to extend its use to other locations, such as cafes, restaurants, and shopping malls in August.

While the French parliament is weighing up expanding the use of the Covid health pass, Castex was clear that it is not currently considering requiring it for school-age children when they return to the classroom in September.

Why Your Vacation Is So Expensive This Summer

Can Thailand’s Peasant Farmers Survive the Thirst for Palm Oil?