The package of (Poseidon ) Tank Atomizer Comes With:

Opening up the sample package of the P Tank I was surprised at it’s appearance ( different ) being what it is. With the airflow in the middle ( still top-air ) and what looks like a jeweled 2nd smaller tank installed on top of it really gives the P Tank a very unique appearance that is like nothing I’ve seen before. It’s nice that Geekvape included both spare glass tubes with the Tank as well as spare O rings along with your standard paper materials of user manual, quick reference card, warning card as well as your warranty card . 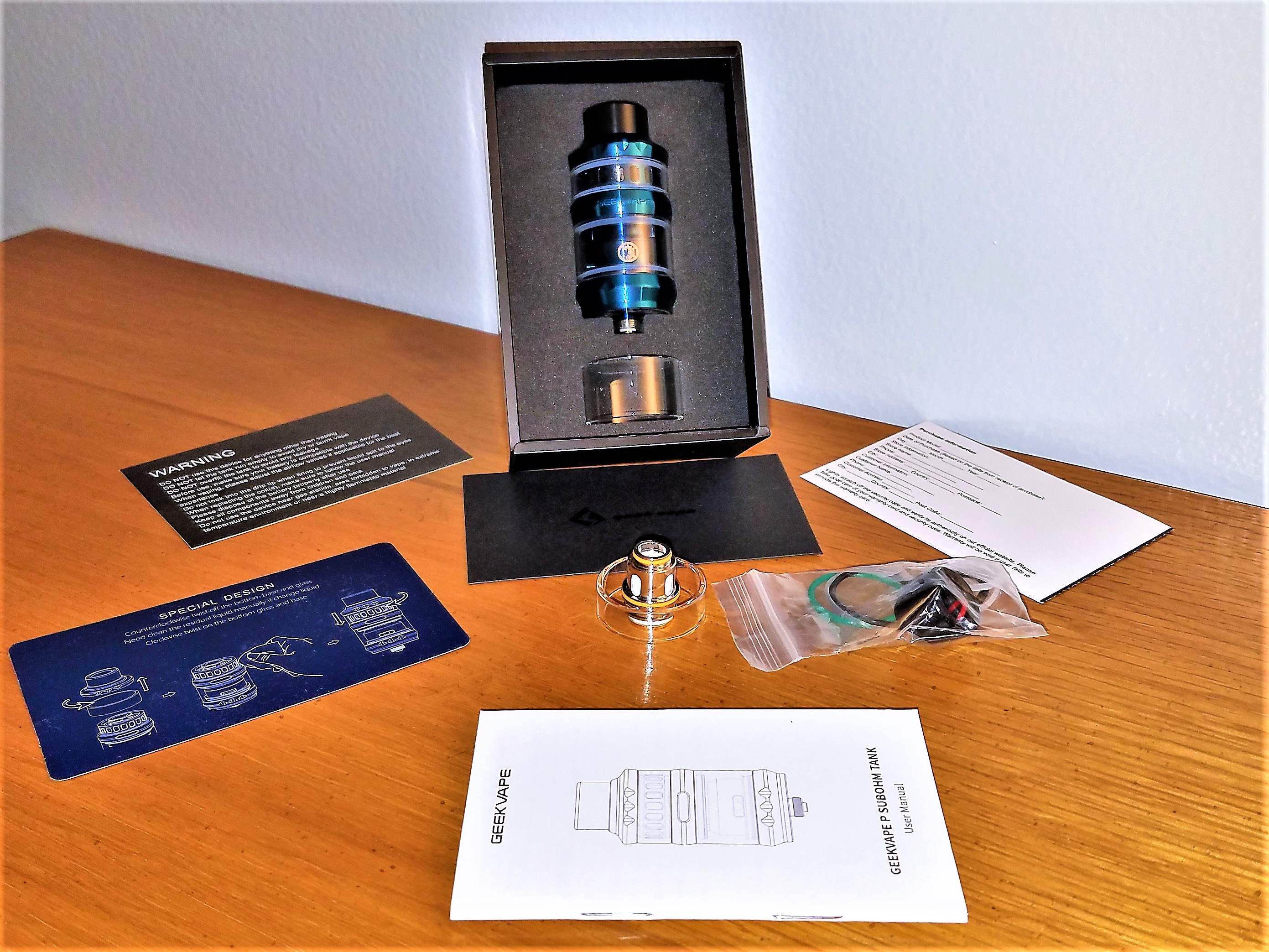 Both of these coils produce great flavor as well as a abundant amount of vapor with the pre-installed 0.2Ω giving a warmer vape than the 0.4Ω that is just as flavorful only at a cooler vape temperature.

The 0.4Ω on the left has a good amount of Kanthal spread out throughout the cotton but at a thinner measurement of wire than the pre-installed 0.2Ω coil on the right. 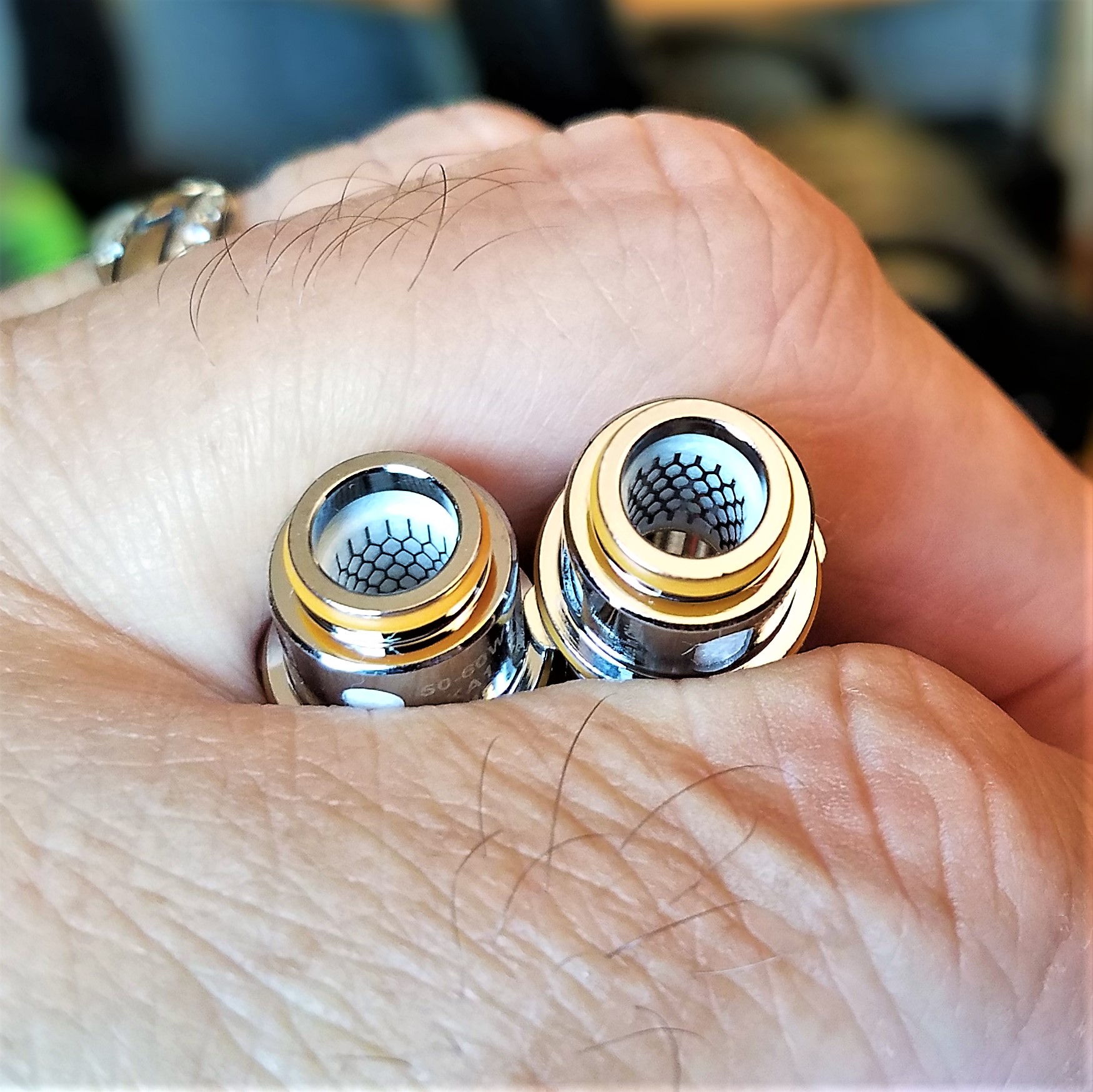 Installing the coils into the Tank is a simple push in process, on the coils are 2 tabs on each side that need to be lined up with the the 2 notch’s inside the Tank, once lined up push the coil into place. Note the 3 large airflow slots that funnel the airflow down from the top of the Tank to the bottom that is pictured. The inner chamber shows the large juice fill slots. 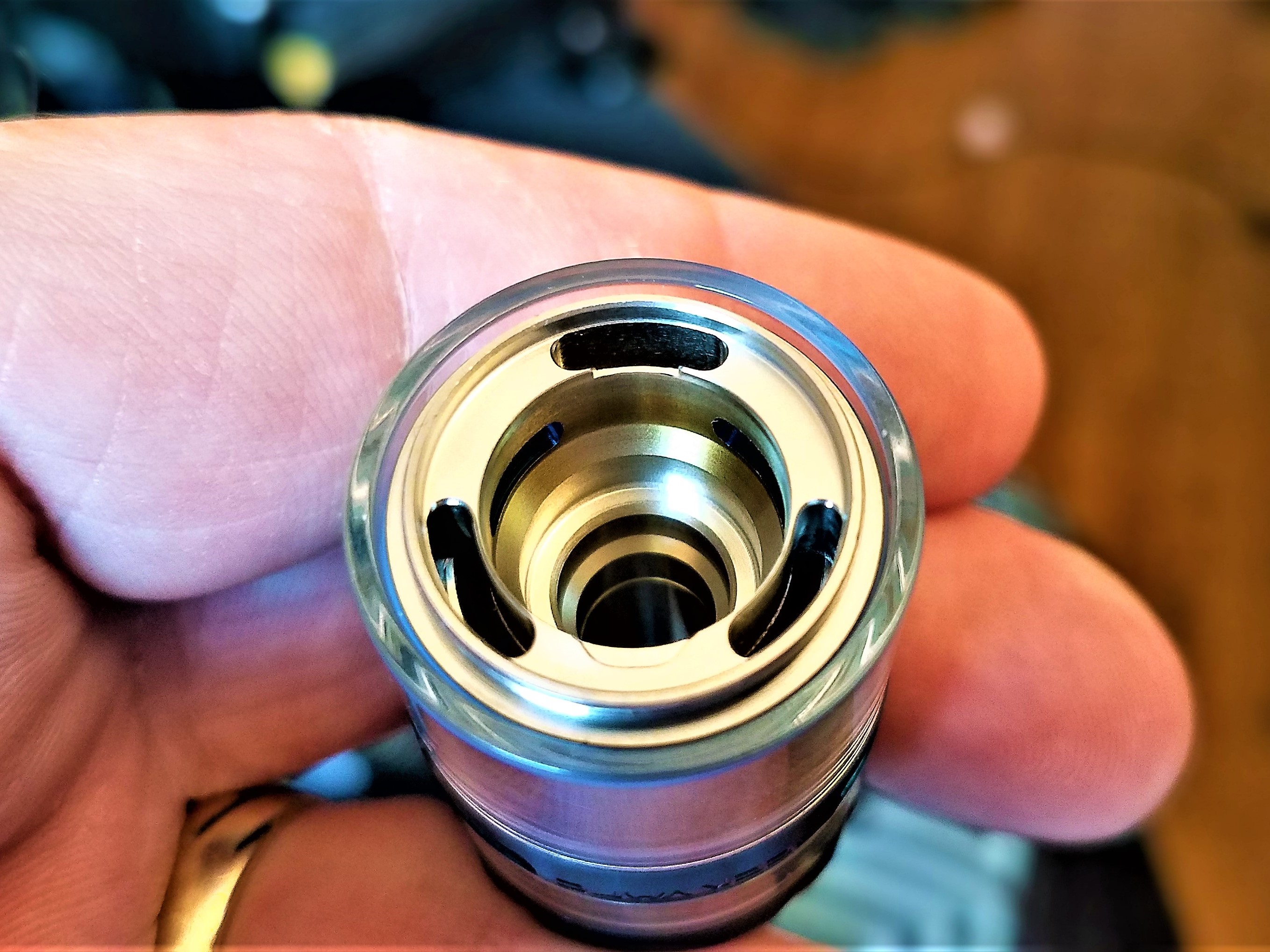 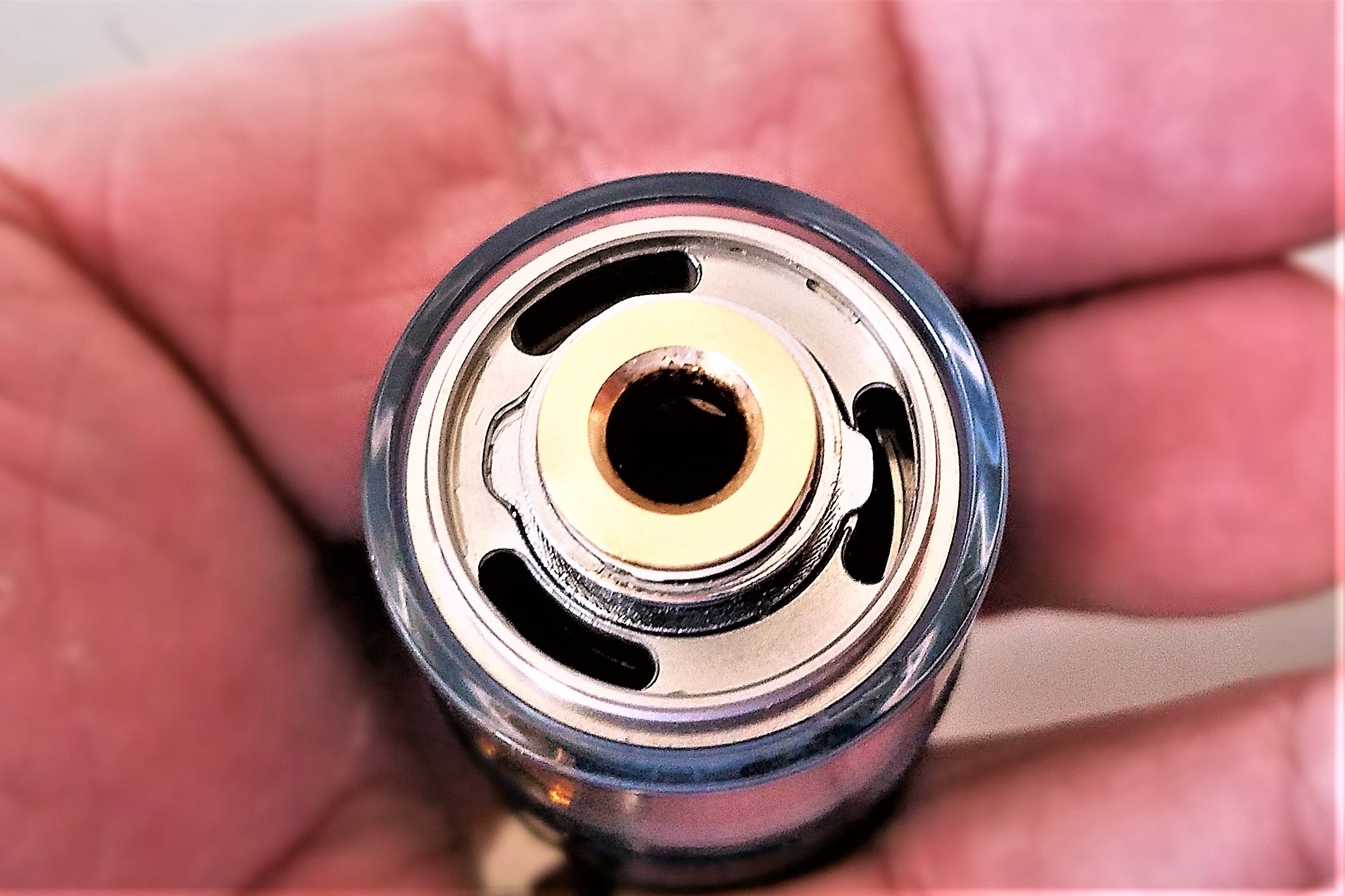 The top portion glass tube is visible through many small window cutouts in the top portion of the Tank, I like this look on the Tank and when turned they kind of glimmer in the sunlight and in a way resemble facets. 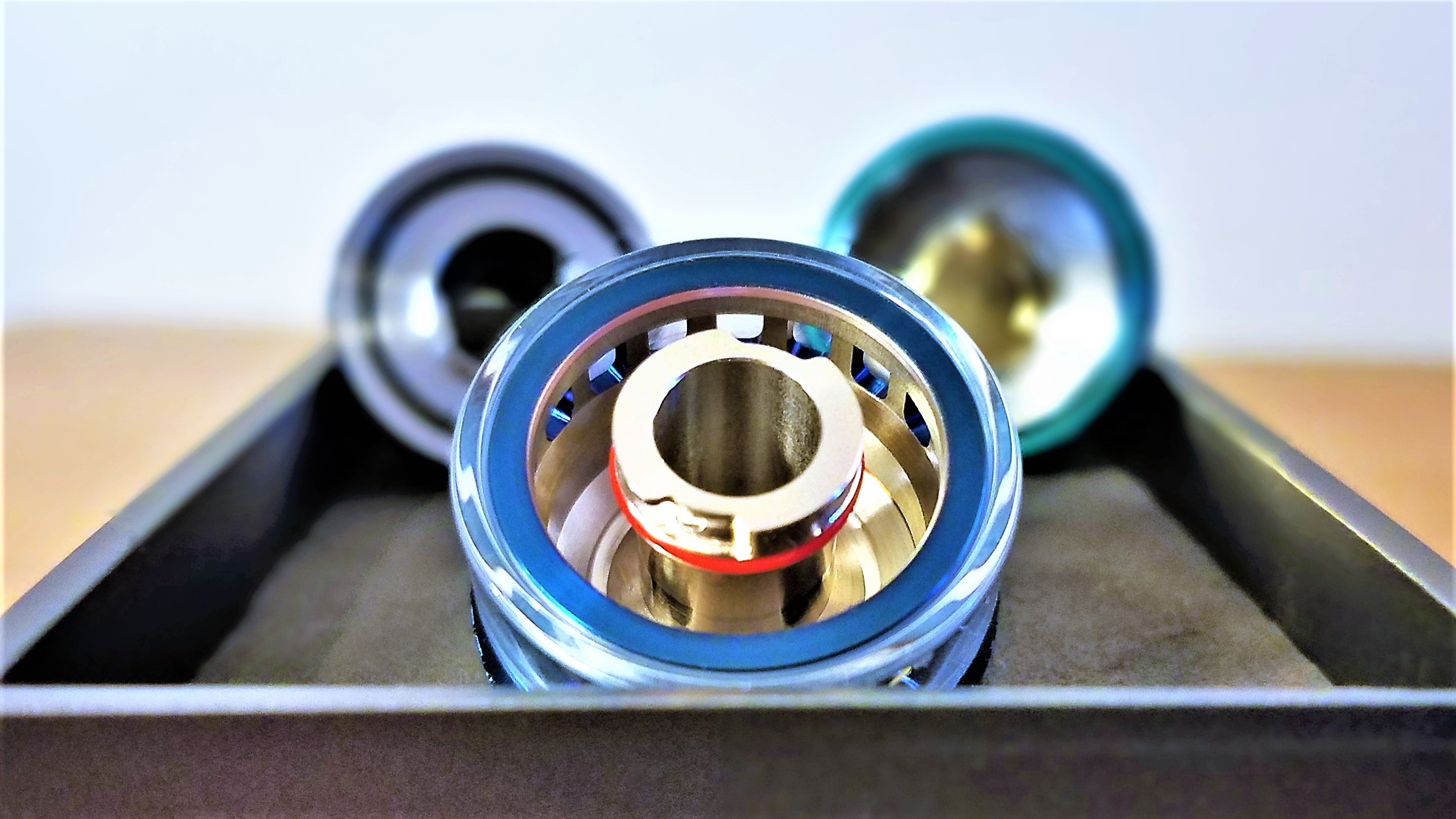 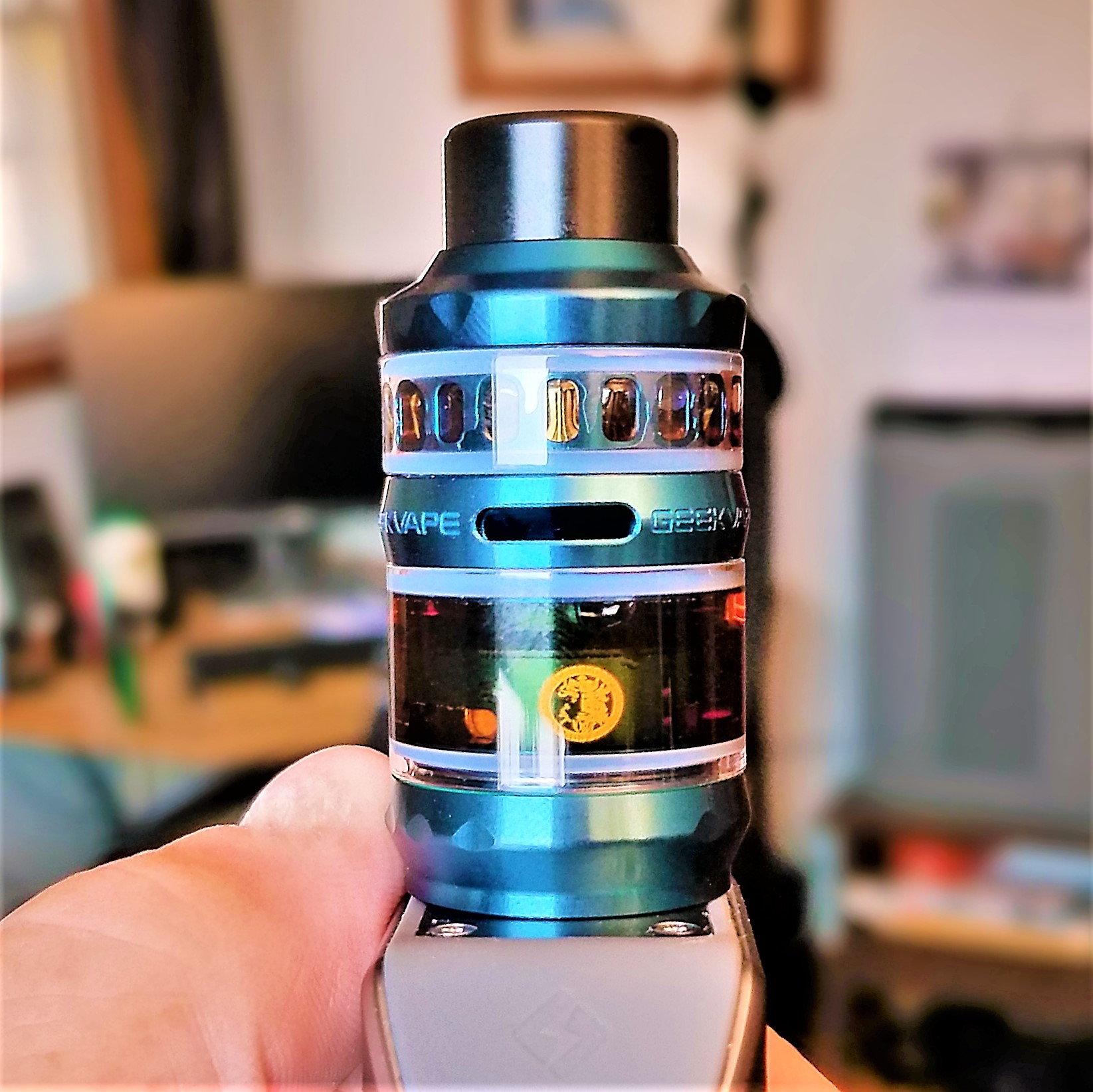 Filling the P Tank is done from the top by just filling through the top glass portion of the Tank, there are no fill slots on the P Tank so you can fill in any location, liquid will fall through to the bottom glass and fill up to the top glass portion, you will notice a red O-ring that prevents liquid from entering the airflow passage and is also your fill level for the Tank, fill to just under that O-ring. ( NOTE ) Keep a eye on the top caps black O-ring because it sometimes falls out when cleaning. 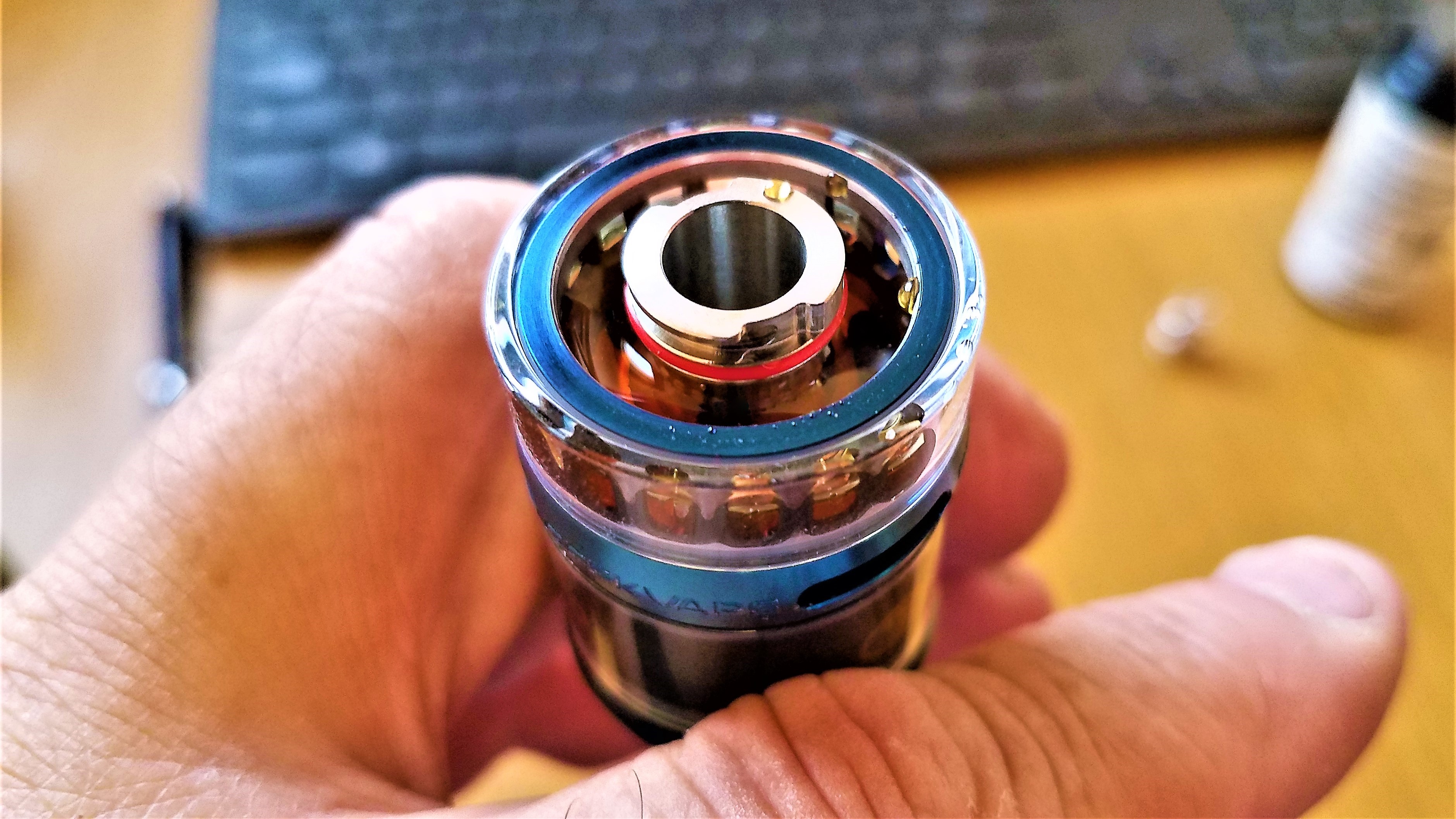 Shown fully assembled and filled notice that the base is measured at 24mm but bumps out to 26mm in 2 other locations on the Tank being the middle airflow section and at the top cap which is a quarter turn to open/close. There is some knurling on the base as well as the top cap helping to get a better grip when opening. 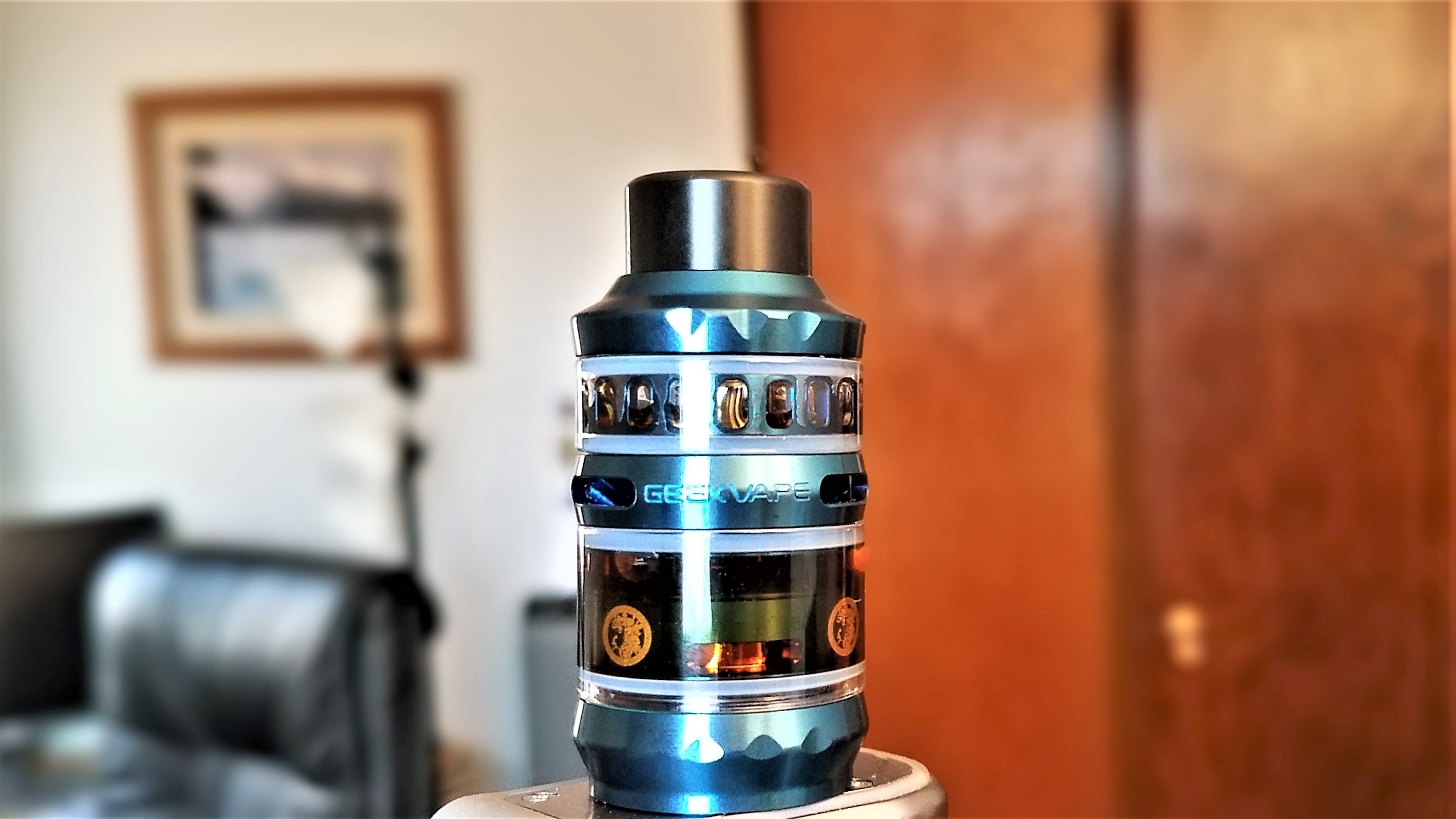 First thing I have to say is it’s different look from a standard Sub-Ohm Tank has grown on me from when I first laid eyes on it ( I LIKE IT ). I really don’t like tall Tanks of any kind and the P Tank is rather tall but the different look helps it not look that as such.

Bubble glass always changes a Tanks appearance and the look is not a good fit for most tanks but for more capacity it’s a must, as you can see there is no bubble but rather 2 straight glass portions that still give us a nice 5ml capacity.

As many of you know I have reviewed many Geekvape Tanks that use the Z coil and I am quite familiar with it, great saturated flavor with a abundance of thick vapor with time proven performance defines them. I have been using both coils at the minimum wattage rating for each and finding my sweet spot there, I saw no need to increase wattage for either coil.

Having 3 airflow slots on a tank such as the P has usually make the Tank a air machine and also increase the noise of the vape, the P gives more than enough airflow that can be tightened up for a very RDL vape if that’s your style of vape.

I am really pleased with the reduction of noise and that the P Tank still provides a very smooth airflow in any position of the airflow control ring which is removeable for cleaning, both glass sections can be removed for a deep cleaning or changing juice flavors if one so wishes.

Being that it’s really a top air Tank but Geekvape calls it middle air because of the top Tank portion it’s virtually a leak-free Tank, just don’t go past the red O-ring when filling and you will have no issues.

I’m going to touch on the appearance again stating that the P Tank not only grew on me but I prefer it to a bubble glass appearance. I put the very popular Z Tank next to the P Tank and if having a choice of appearance only I would 100% choose the P strictly because no bubble glass was used and it still has a 5ml capacity.

After putting them side by side in this photo height was no longer a factor, I still love the Z Tank and still use it but prefer the look of the P Tank even more. Looking at this picture the bump outs on the top cap, airflow control ring and base look like the glass would be protected because the bump outs would hit first on a fall over. 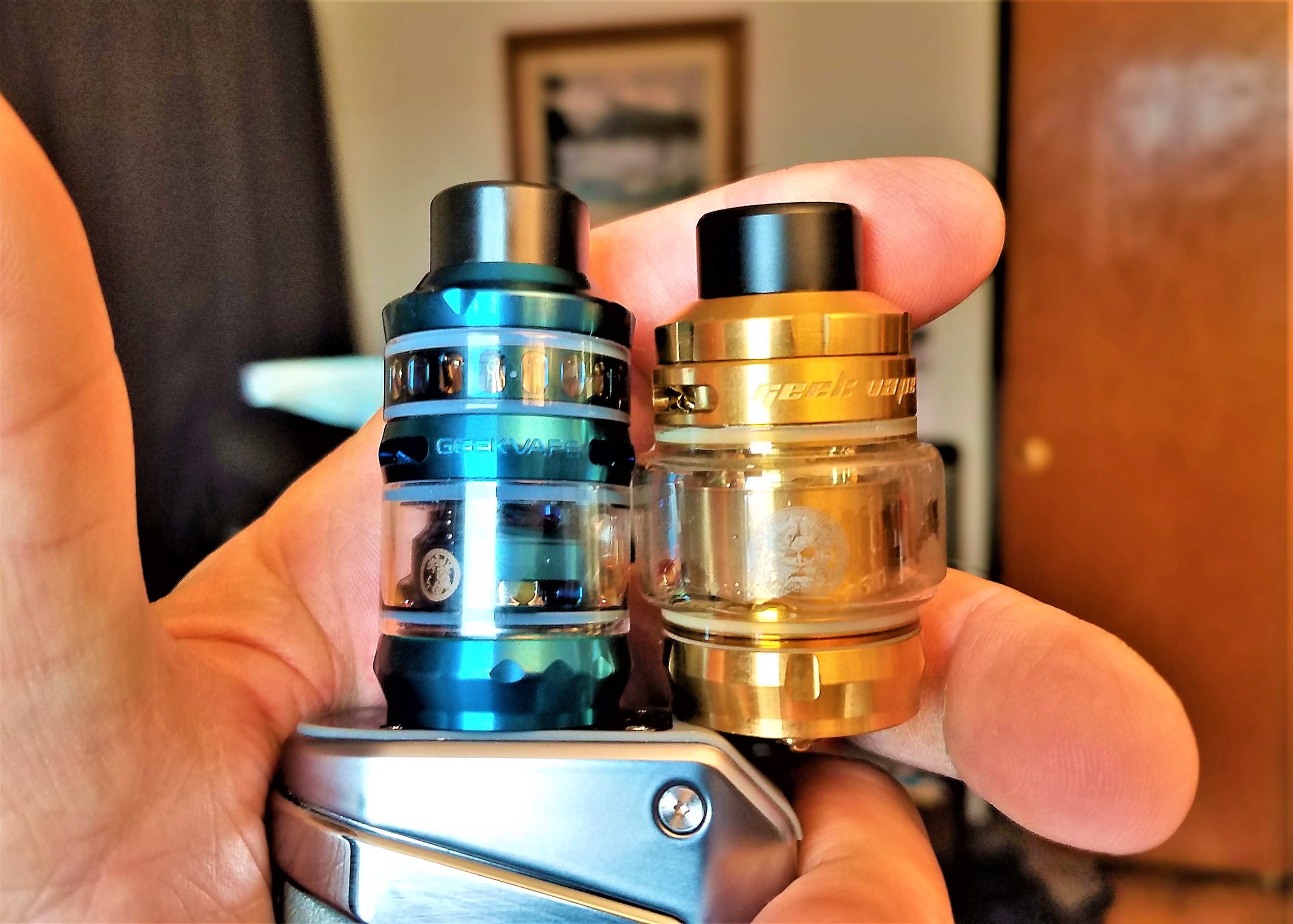 In closing I want to applaud Geekvape on trying something different on a design stand point, granted they could have just made a very tall straight glass tank and called it a day but I’m glad they didn’t, as I stated early on I was scratching my head on this Tank design but after using it for some time I really like it as well as recommend it 100%.

The P Tank has and is still performing great and for that reason alone I will not be doing a pros and cons for it because the only con is a subjective one for some ( APPEARANCE ) this Tank has checked all my boxes that I look for with a tank. I do wish the Poseidon image was larger though.

I would like to thank Allison and Geekvape for providing the P ( POSEIDON ) Tank for the purpose of this review and I hope that my review answered some of your questions about the new P Tank from Geekvape.