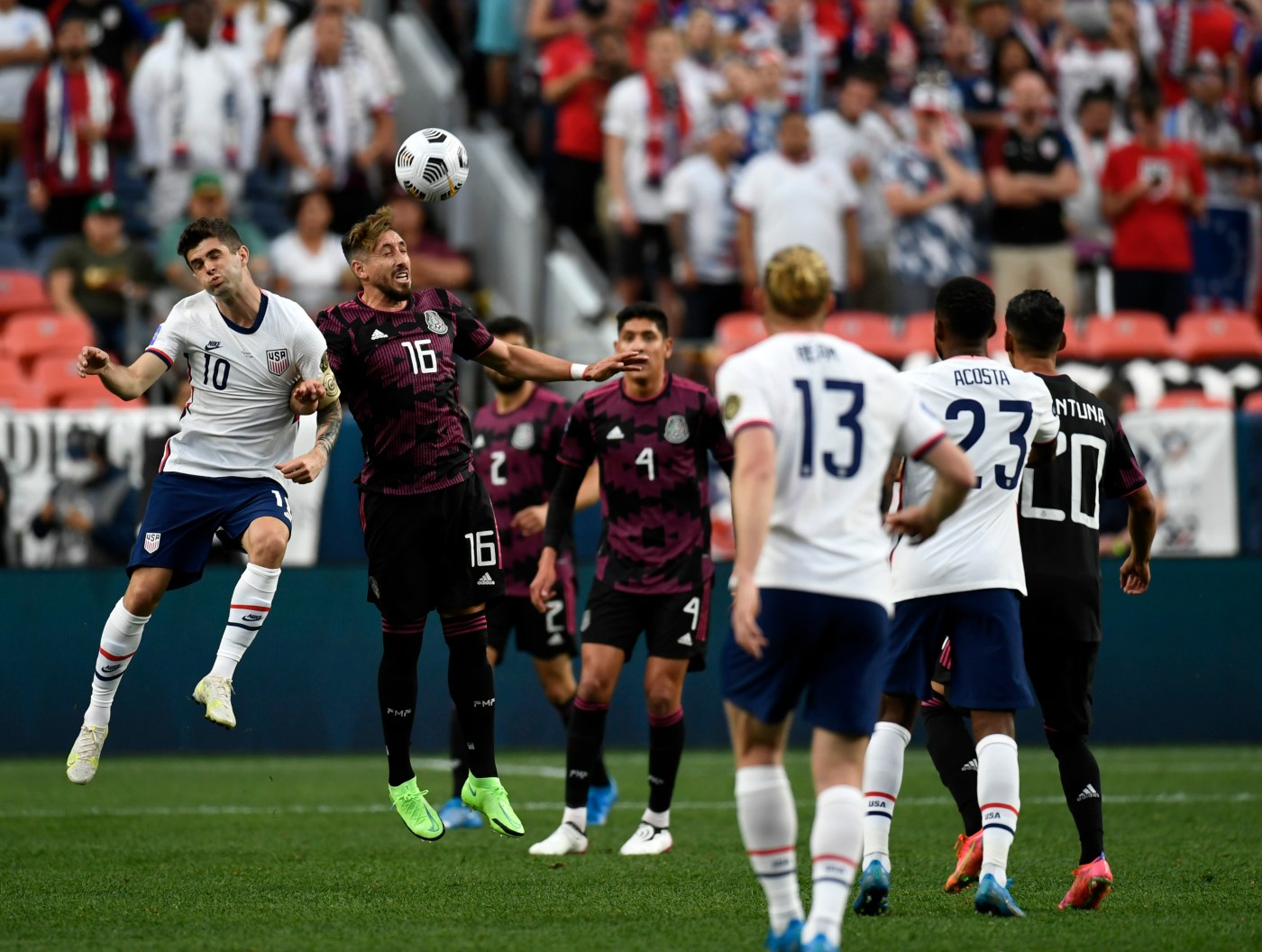 Ethan Horvath smiled from the eye of the hurricane. As shots, cleats, legs, debris and even fans swirled around Empower Field at Mile High, the Highlands Ranch native looked like the calmest guy on the field.

From a bonkers start to manic finish, Sunday night was a homecoming to remember. Horvath, the former Arapahoe High standout, came off the bench at the inaugural CONCACAF Nationals League final in the 68th minute to replace goalkeeper Zack Steffen and help the U.S. Men’s National Team down Mexico, 3-2, before a crowd of 37,648 at Empower Field.

Horvath’s penalty save tour minutes past the second period of extra time preserved the first USMNT win over rivals El Tri in a non-friendly match since September 2013.

A match that started spicy ended that way, too.

Some 20 minutes into extra time, a USMNT penalty was confirmed via VAR — Video Assistant Referee, soccer’s version of instant replay, with a handsy Mexico coach Tata Martino picking up a red card during the review — and slotted home by American star Christian Pulisic in the 113th minute.

Things would get crazier still, as a second VAR review gave Mexico a penalty try of its own four minutes after the allotted 120 minutes of extra time, threatening to take an already long contest into penalties. But Horvath went right to bat away Andres Guardado’s attempt, sending U.S. fans in the crowd into a frenzy.

And speaking of frenzy, following Horvath’s game-clinching save, at least one spectactor popped out of the stands and raced across the field, almost getting lost in the Mexico defense in the process.

Horvath’s first big test came in the 79th minute, when Mexico midfielder Diego Lainez cut from the right side of the box to his left and fired off his left foot past the Denver native to break a 1-1 deadlock.

The host Yanks responded with a goal from Weston McKennie’s head off a corner two minutes later. With the match tied 2-2 and extra time looming, Horvath rose — and stretched — to the challenge.

“For him coming into the game like that, being able to play hero for us, it was amazing, and it’s well-deserved,” McKennie said of Horvath, who replaced Steffen after the latter left with an apparent knee problem. “(Ethan) doesn’t put his head down, he doesn’t shy away from the task at hand, and he got it done.”

The ex-Arapahoe High standout made three saves in a whirlwind first two minutes of extra time. The most spectacular was the first, with the 6-foot-4 keeper pushing away a rope off the foot of Mexico’s Luis Romo with his left hand. Horvath, who plays for Belgian First Division A champion Club Brugge, was forced into a similar parry shortly thereafter.

He subsequently fell to the ground to smother a loose ball to his left and end a Mexico possession and then appeared, via replays, to suffer the sliding cleats of El Tri’s Hector Herrera.

The two sides got into a shoving match in response, with yellow cards issued to both teams. The contest was then halted by match officials because of a homophobic chant in Spanish from the crowd.

It was the second straight match involving Mexico to be paused by CONCACAF referees because of the chant. Spectators had been warned over the public address system just before halftime to refrain from using the chant.

“Overtime was just a complete mess, to be honest,” USMNT coach Gregg Berhalter said after the contest.

El Tri had won seven of the previous 15 meetings dating back to July 2009, with the U.S. winning four and drawing three. Mexico came in having won four of the last six matches between the rival squads.

The Yanks came close to breaking the deadlock in the 62nd minute, but forward Josh Sargent mistimed his shot off the rebound after Mark McKenzie’s shot was parried by Mexico keeper Guillermo Ochoa. A 71st minute header off a corner by McKennie was careening inside the right post when Ochoa swatted it away.

While El Tri was looking to bounce back from a somewhat listless win over Costa Rica on penalties in the semifinals last week, Berhalter made a tactical switch for the final. The Stars and Stripes shifted to a 3-4-3  look with Rapids midfielder Kellyn Acosta starting in the middle of the pitch.

Some 60 seconds into the tilt, McKenzie made a careless lateral pass in his own box, with El Tri attackers closing on either side. Mexico’s Jesus Corona intercepted the gift only a few yards to the left of the helpless Steffen, who could only flail as Corona lasered it into the net for a 1-0 Mexico lead within the opening minute

El Tri faithful, which made up the majority — at least from a noise standpoint — of the crowd at Empower Field, thought they’d put the match to bed at the 24-minute mark, via a Hector Moreno header from the right side of the box. That excitement faded quickly when a VAR review determined that Moreno was offside.

Given a lifeline, the U.S. attackers pounced. Roughly three minutes after the VAR ruling, McKennie fired a header off a Pulisic corner that carmomed hard off the left post and back into the waiting path of teammate Reyna. The forward then coolly rocketed the rebound with his left foot to level the contest.

Earlier in the day, Honduras defeated Costa Rica on penalties in the Nations League third-place game, 5-4, after regulation ended in a 2-2 draw. The former rallied from a 1-0 halftime deficit to take a 2-1 lead into the 85th minute, when Costa Rica’s Francisco Calvo found the back of the net to knot the contest a second time.

Colorado’s Ethan Horvath “with the save of his life” for the U.S. against Mexico at CONCACAF Nations League championship – The Denver Post