An internal HSBC report, seen by the Financial Times, traces money transferred by PPE Medpro, which received £202mn of government orders for personal protective equipment in the pandemic, to accounts that benefited Barrowman and Mone.

PPE Medpro’s bid to supply the UK government in 2020 was placed in a “high-priority lane” after lobbying from Mone even as she maintained that she had no involvement in the company. Barrowman has also previously denied being an “investor” in PPE Medpro.

HSBC unfroze the accounts in November 2020 after assurances from Barrowman, only to immediately raise fresh red flags over “discrepancies” in information provided by the businessman and his wife, according to its report.

Barrowman assured the bank that neither he nor his wife had any role advising UK government officials on PPE procurement and that Mone had no involvement in the business activities of PPE Medpro, the report says.

However, Mone told the bank that she and Barrowman advised government ministers on procurement and complained that the frozen accounts were damaging PPE Medpro, “indicating [she] may indeed have had an interest” in the supplier, HSBC found.

The Guardian this week first revealed the existence of the HSBC report, including that accounts linked to Mone received profits from PPE Medpro. This article contains new details about HSBC’s findings and the responses from Barrowman and Mone.

The government came under heavy criticism last year when it emerged that in the early months of the pandemic it had awarded two contracts — for £80mn and £122mn — to PPE Medpro after Mone lobbied then ministers Michael Gove and Lord Theodore Agnew using their personal email addresses.

The largest part of the order, about 25mn surgical gowns, was ultimately deemed unfit for purpose.

The HSBC probe found that £65mn in profits from PPE Medpro were transferred to The Warren Trust, whose beneficial owner was Barrowman and registered in the Isle of Man, £45.8mn of which was then transferred to Barrowman’s personal account.

A sum of £28.8mn was then transferred to The Keristal Trust, whose beneficiaries were Mone and her children, the documents show.

Barrowman said the transfers were made for “tax efficiency reasons” and that he sent money to Mone and her children in “his personal capacity”, the document said.

More than £700,000 was also transferred to the account of Mone’s eldest daughter Rebecca, as well as £3mn to another account Mone held with the private bank Coutts, the report states.

It is not clear from the documents why Barrowman — who has repeatedly distanced himself from PPE Medpro — received or disbursed profits from the company.

PPE Medpro has one director, Anthony Page, who until recently was also a director of the Knox House Trust, part of the Knox group, founded by Barrowman. Page had been the registered secretary for MGM Media — a company that managed Mone’s personal brand — until he quit the role on the day PPE Medpro was set up.

Barrowman did not respond to requests for comment about the “gifts” and company taxes.

A lawyer for Mone said: “There are a number of reasons why our client cannot comment on these issues and she is under no duty to do so.”

PPE Medpro is under investigation by the National Crime Agency.

Dan Neidle, former head of tax at Clifford Chance and founder of think-tank Tax Policy Associates, said HM Revenue & Customs, the UK tax authority, might view the £29mn as a payment to Mone for her services in helping the company get its contracts. 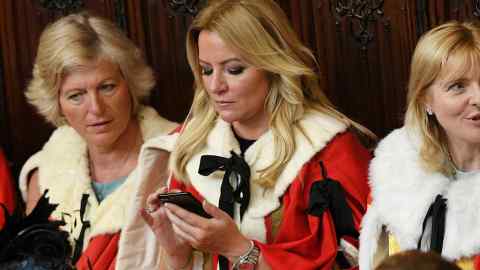 “On that basis, it is fully taxable, whether she receives it in the UK, puts it into a trust, or keeps it on the moon. Members of the House of Lords are deemed to be UK resident and domiciled,” Neidle said. “Her response may be that it was a gift from her partner, but if there hasn’t been a pattern of similar gifts then HMRC will likely be very sceptical.”

The HSBC probe also highlighted concerns related to the source of an original £3mn of capital injected into PPE Medpro in June 2020, referenced “PPE Transfer”.

HSBC outlined how Barrowman’s refusal to provide details regarding the source of the money — “advising only that we do not need to know this and that how things are accounted for in the Family Office is their business” — meant the bank was “unable to fully rationalise the activities and fund flows through the accounts”.

The bank identified “unusual transfers”, with funds crediting and debiting Barrowman’s related accounts “within minutes of each other” and concluded that “the customer may be attempting to conceal the true origins of the funds through multiple layers of transactions creating a distance between the receipt of PPE funds and final beneficiaries”.

HSBC subsequently dropped the couple as clients, according to people familiar with the matter.

If you can inform our reporting, please contact anna.gross@ft.com. We want to hear from you. If your information is particularly sensitive, consider contacting us using one of these secure methods.

Could a Grayscale Bitcoin Trust collapse be the next black swan event? Watch The Market Report

Could a Grayscale Bitcoin Trust collapse be the next black swan event? Watch The Market Report