Hyundai Patents Steering Wheel With A Screen Right In The Middle 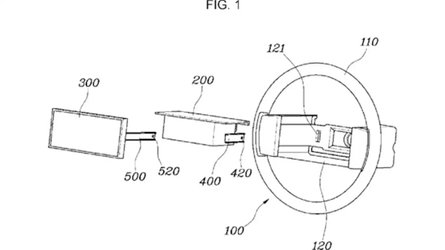 Screens are pretty much everywhere these days. Since smartphones and tablets are pretty much the norm, looking at and interacting with screens seems second nature. With that, Hyundai wants to reinvent the steering wheel.

The South Korean automaker recently applied for a patent that adds a screen on to the steering wheel. We’re not just talking about tiny displays on the steering wheel, either. Instead, they want to to put it smack dab in the middle of it. So, is this revolutionary or a screen too far?

But before that, let’s have a quite background check. This isn’t necessarily Hyundai’s first dabble into this idea. Back in 2019, they came up with something called the Virtual Cockpit Study. It basically added two rather sizable touchscreens at the corners of the steering wheel fascia. And because it’s a touchscreen, there is no need to add buttons on the steering wheel.

The latest patent goes a step further from their 2019 concept. There are no specific details yet, but the display is where the horn pad would typically be in a standard car. From there, it is expected that it will serve as the vehicle’s instrument cluster and multi-information display. Think of it as something like Audi’s Virtual Cockpit, but smack dab in the middle of your steering wheel.

You’re probably wondering where the airbag will be because of the screen in place. The patent mentions that it will be contained within the steering wheel. Separate mounts also mean that the screen will be undamaged in case of deployment. If it’s a little difficult to wrap your head around the idea, check out the Genesis Mint concept’s steering wheel. It looks a little extreme but it also gives you a better idea of what Hyundai has in mind.

It seems that Hyundai’s goal here is to create a cleaner, less cluttered dashboard. However, is this a solution to a problem that no one has thought of yet, or is it actually a smart idea? It remains to be seen how Hyundai moves forward from this, but it’s a worth a look nonetheless.

Daniel Ricciardo Won A Bet To Drive An Ex-Dale Earnhardt Stock Car At COTA, Everyone Wins

The 2022 Acura RDX Is Spicier and Pricier

Czech prime minister may be on the way out after party's election loss : NPR

The Troubling Role of Glyphosate in COVID-19