The Tucson has been a mainstay of the Hyundai line-up since 2004, and the firm certainly sees that run extending. It is the firm’s best selling model in the UK after all, and Hyundai has said its aim is to keep the SUV at the forefront of the brand, with a heavy focus on fleet drivers seeking a BIK-friendly family hauler.

The Tucson saw a radical and well-received design overhaul earlier this year. It distanced itself from the old model, with a new front grille, bonnet design and LED lighting arrangement. While there are no extravagant design specifics for this variant, changes under the skin mean the Tucson now has the most diverse array of available powertrains in the Korean giant’s line-up. The plug-in hybrid tested here runs a four-cylinder petrol engine mated with a 67kW electric motor and a six-speed automatic transmission.

In total, the Tucson produces a gutsy 261bhp and 258 lb ft. Kerb weight comes in at just under two tonnes, which depending on specification can be as much as 499kg more than the standard model. The Tucson pays the price for this added bulk with a 0-62mph time of 8.6secs, beaten by the likes of the VW Tiguan eHybrid. Rivalries aside, it’s still one of the most capable specifications in the line-up, with a top speed of 118mph and, of course, the option of engine-off running for up to 31 miles.

Our test car was in top-rung Ultimate specification, which is equipped with 19in alloy wheels, an impressive haul of safety assist systems, a panoramic sunroof and electric seats. It also benefited from the optional Tech Pack, which includes electronically controlled suspension (ECS), park assist, blind spot camera and collision assist, as well as an electric tailgate which gives way to a practical 558-litre boot. 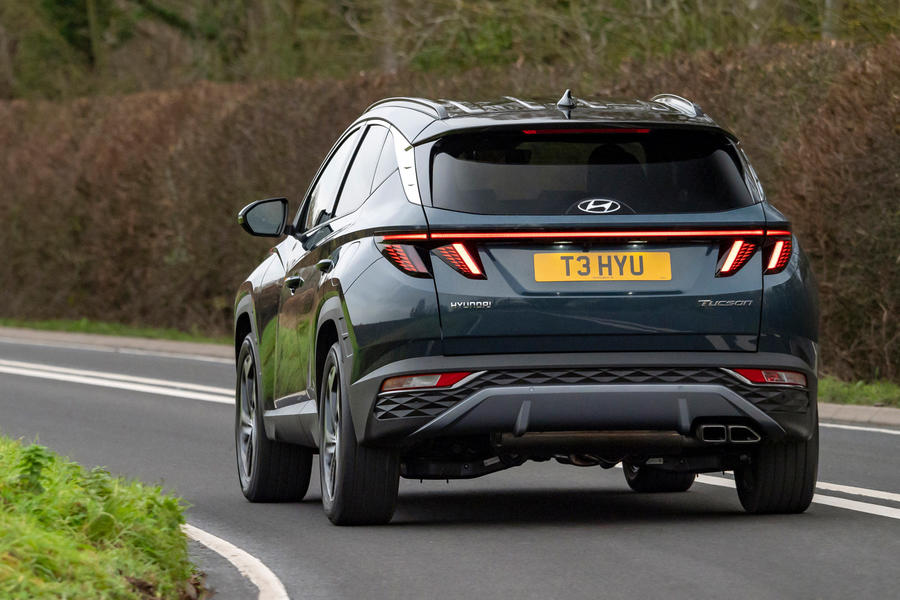 Inside, the Tucson is a prime example of how new-era Hyundai models have started to give premium segment stalwarts sleepless nights. Soft plastics and fabrics adorn the dashboard and doors, mixed with metal trim surrounding the air conditioning vents. The model features a 10.25in touchscreen unit with sat nav, which is simple to use with good screen resolution at a reachable angle for the driver and includes Apple CarPlay and Android Auto are included.

The driver’s display is also digital, matching the central screen’s 10.25in size, and in the PHEV can be used to display a useful energy-flow graphic, showing when the petrol unit, EV motor and brake regeneration function are being called upon. There’s also a useful coasting feature, which prompts you to take your foot off the accelerator when approaching a junction to save some power. Interior buttons are well positioned, though many of the traditional switches and controls have been replaced with touch-sensitive controls which can be fiddly to use on the move. Three drive modes, automatic, EV and hybrid are available, and as this is an all-wheel drive model, you also gain three different terrain modes for snow, mud and sand.

Sydney auctions: West Ryde sells for $165,000 above the reserve after 26 buyers compete