I saw those posters and I was so happy! But then I had to look them up on the internet and I found people angry about them because “what will the children think?!” : lgbt

Yesterday, when I was waiting for the train, I saw those posters and I had to take a picture of them because I was so happy to see them! 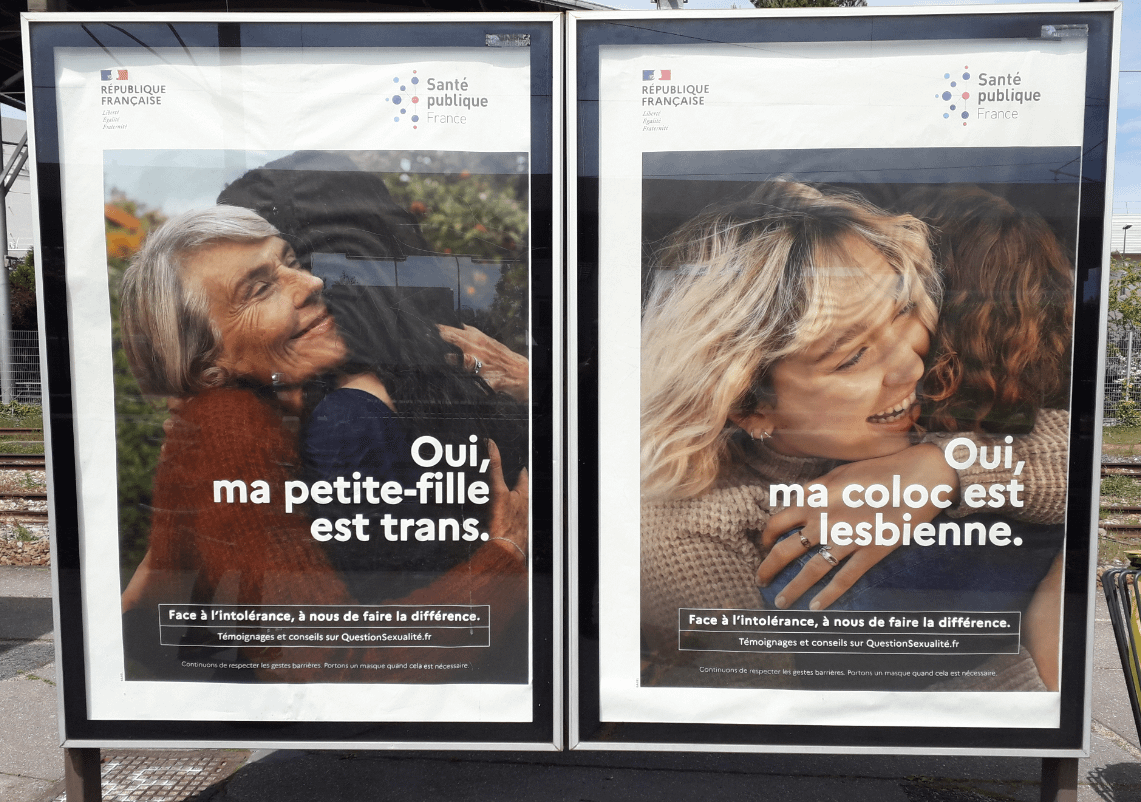 It’s in French, but they say “Yes, my granddaughter is trans” and “Yes, my roommate is lesbian”. In little at the bottom is the phrase “Against the intolerance, it is up to us to make a difference” (and in very very little it’s something to remind everyone to keep their mask on and to keep on being careful)

And I love the idea! I love seeing this kind of subjects brought to light! To see those posters at the train station was so amazing!

And then, I had to look for them on the internet. First of all, nice, there are five of them (“yes my daughter is lesbian”, “yes my father is gay” and “yes my friend is gay” being the three missing). But the second article was about a woman (she works for the mayor office of the biggest city of the region) and two other people. What happened? They wrote a letter to the mayor to ask him to put the posters down because “this campaign, under the idea of tolerance, expose for everyone to see, and in particular the children, sexual and familial situations that shouldn’t be promoted or encouraged”. They say the campaign is confusing the children and that the parents are now in a position where they have to explain delicate subjects and that it isn’t fair to them. They say it’s an insult to the choice of the parents to choose when to talk about those subjects with their children and gnagnagna and gnagnagna (I mean if parents are angry because their children can read those posters and ask questions and then the parents don’t want to respond because “they are too young!”, would they really talk to them about the subject later? And well it’s never too young).

And ARGH! It makes me angry that people are angry about those posters. They aren’t promoting anything except love? Except acceptance? And I was so happy to see them! Yes, a lot of orientations and identities are missing but still! It’s still a big step!

Oh and the last time posters were the object of recriminations in this city, it was about an app for people to find partners outside of their marriage. So nice to see that a campaign for tolerance and love is put in the same basket that an app promoting adultery…

Anyway, I’m still so happy to have seen those posters out in the open for everyone to see.

TLDR: in my region (in France), there is a campaign to promote tolerance for LGBT+ people and some people are angry about it and say the posters are outrageous and should be put down.

Should I sell my 09 Honda Civic for a 21 Kia Forte : personalfinance

The One Where China Censors Lady Gaga And Justin Bieber @ Top40-Charts.com