Alexander Chee’s blurb on the back of Isaac Fitzgerald’s recently published bestselling memoir, Dirtbag, Massachusetts, reads: “He’s a ringleader for the circus in the House of Love.” And after reading this book, I think most people would agree that Isaac Fitzgerald is certainly at least that, and then some.

Dirtbag, Massachusetts is a memoir-in-essays about how a lost soul with a diamond heart manages to figure out — after a series of jet-fueled, drug-addled escapades — how to put together a life out of all the pieces left in the wreckage of his past. That past spans living in the Catholic Worker’s homeless shelter in Boston, to living and working in the bars of San Francisco at the onset of the AIDS pandemic, to acting in a few porn flicks, and to round things out, Fitzgerald spent time in Burma, working with a group called Free Burma Rangers smuggling medical supplies over the Thai-Burmese border. He’s settled in Brooklyn now, where he has been living for a number of years.

As somewhat harrowing and frenzied as the book can be, the essays also trace indelible moments of joy and a lifelong devotion to books and reading. And it is through that devotion to literature that Fitzgerald finds himself eventually championing other writers — first as the books columnist for Buzzfeed, and most recently as a critic recommending books as part of a regular segment on The Today Show.

Isaac Fitzgerald is the author of the bestselling children’s book, How to Be a Pirate, and coauthor of Pen & Ink and Knives & Ink, two books about tattoos and the people who wear them. Fitzgerald himself has ink spelling out C-O-M-E spread across the knuckles of his right hand and the letters H-O-M-E, finishing the sentiment, across the knuckles of his left — a message to someone who lost their way? Or could it be a reminder to all of us to remember where we came from?

SPIN caught up with Isaac in the middle of an extensive book tour.

SPIN: Isaac, to start with a cliché, I couldn’t put your book down until I finished it. Its familial sadness reminded me at times of Nick Flynn’s memoir, Another Bullshit Night in Suck City, about his mother’s suicide and working at a homeless shelter, also in Boston, where his father was a client.
Isaac Fitzgerald: Ha! I literally have a book list that somebody asked me to write about what books influenced my book, and number one on that list was Nick’s book. Good call! 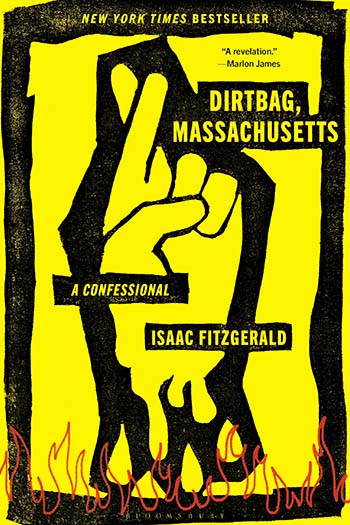 Your book, though, even with all the rambunctiousness and restlessness has this wide swath of empathy and love running through it. In a way, the book sits somewhere between being angry about your past and forgiving it at the same time, making it read like both a confessional and a reckoning.

That’s an excellent reading of the book. What I realized — and I’m somebody who came to therapy rather late, just in the last three years — was that when I examined my own life and what I thought I was okay with, or who I thought I was — that life was really about how I acted out in some very weird ways. I thought of myself as someone who wasn’t angry as much as I was this person trying to be openhearted to the world. Then, of course, it took a therapist to point out to me, “What was that thing about fighting all your friends when you were kids, not out of anger, but because you thought it was fun? You don’t think that maybe you were pushing things down and those things eventually came out while you were all fighting each other?”

So, maybe in an unconscious way you were discovering a way to neutralize spaces that others would consider dangerous?
Exactly!

One of the loveliest moments in the book is when you’re in San Francisco and describing your friendship with a gay man named Jef who later died. And it occurred to me, from the little bit I already know about you, that there’s a special affinity you have with gay men, even though you identify as straight. How did that relationship with the queer community happen exactly?
That’s a wonderful question, which nobody has ever asked. And something where I’m like, oh, is this something I maybe should talk about in therapy? Because it does seem like something interesting to delve into. I think it all starts with The Catholic Worker and how much joy I found there as a child. We’re talking about the ‘80s. We’re talking about the AIDS crisis and how the systematic homophobia meant that no one was even talking about AIDS. I was raised in this place where there were a lot of gay men and where there were a lot of people that were losing friends and loved ones who were close to AIDS in the community.

And I have to wonder if that made me have an affinity for those kinds of relationships. Which is to say, I was seeking out friendships with gay men because they made me feel safe. Of course, there’s definitely a world that is much more homophobic than any upbringing I received, but my parents were progressive. And they were open to this kind of thing and wanted to make sure I was raised in a non-hateful space. I’m very thankful for that, and especially thankful to them for introducing me to the world of books and reading.

Bringing me to the first question I meant to ask you and only just now remembered. So, Isaac, what are you reading these days?
The last great book I read and absolutely loved was Night of the Living Rez by Morgan Talty, a wonderful short story collection that, like my book, also came out in July. And why I love it so much is because Morgan is a Native American writer and the reservation where he grew up is, I believe, on an island in the middle of a river. But it’s a reservation up in Maine. And the book is about people trying to figure themselves out, people trying to figure out family — right up my alley!

Your writing has a wonderful consistency to the cadence of the sentences. And then sometimes you do this thing where you double back to something you’ve just said in order to say it differently, or you might repeat it for emphasis. What is your writing process?
This opens me up to talk about a few things that are very important to me. I always have to read my work aloud. So that’s where the rhythm, the cadence, starts. The sentences in Dirtbag, Massachusetts didn’t look like this in the beginning.

To start off, I just word vomit on the page. Sometimes I’ll even record myself talking and then typing it up, which never really works as well as one would hope. But once those words are on the page, I can read them out loud to hear the echoes and where they should fall. As I start to say it out loud more and more, reading it draft after draft, that’s when the fine-tuning of the sentences really starts.

There’s a wonderful moment in the book when you say, “My friends were cooler than me, which would always be true at any time in my life. I tend to punch above my weight when it comes to friendship.” This is such a telling and astute observation you make about yourself.
Well, I have a tendency to put other people up on pedestals and belittle myself, but that is how I’ve felt my entire life. When I was 12, I was hanging out with kids that were 16, 17, 18. And they seemed incredible to me. They seemed so cool. They had access to trucks; they went to parties. I was like their little mascot at the age of 12 and 13. And I couldn’t believe they were letting me ride in the truck, or that I was getting invited to this or that party. I’ve had that sense of wonder through friendships my entire life.

I bet you were the coolest person to them, because, Isaac, c’mon, you come across as a pretty cool dude.
Well, I think it will be one or two more years of therapy before I can take that in. But I will say, I am working on understanding that maybe I can now bring a little more to the table.

You’re probably enjoying more success now than maybe you’ve ever had in your life, at least on a professional level. Would that be a fair assessment? After all the sadness and tempestuous living you’ve had, how are you taking in all this newfound success, knowing how hard it was for you to feel good about yourself?
You’re nailing it. And I haven’t talked about this with anyone yet. So I’m happy to be talking to you for the first time about it. To be honest, I almost put the book in a vault. I couldn’t look at it directly for a little bit, and then it took me a few days to even just sit with it, to accept it. Now, though, finally, I think it’s time for me. And I’m ready, I’m ready in my heart to be excited about all of it.

Deavan Clegg and Jihoon Lee’s Son Has Cancer: Where is His Dad?

TikTok’s Latest Lip Craze Is So Easy to Recreate

TikTok’s Latest Lip Craze Is So Easy to Recreate