Frank Lampard was full of praise for two Chelsea stars after the FA Cup win over Luton, while also reflecting on the penalty miss by Timo Werner and another Kepa mistake.

A Tammy Abraham hat-trick secured the Blues a victory over the Championship side to relieve some pressure on Lampard.

Abraham slotted in from Timo Werner’s cut-back before nodding in a second from Reece James’ chip.

Jordan Clark scored for the visitors – after an error by keeper Kepa Arrizabalaga- on 30 minutes to keep them in the game.

But Abraham poked home to seal victory before Werner missed a penalty.

Chelsea will face Championship side Barnsley in the fifth round.

Speaking after the game, Lampard said: “It’s a competition we’ve had success with and the expectation is we go through. We had to get the game right and we did.”

Lampard paired Mason Mount, captain for the day, and youngster Billy Gilmour in midfield and was delghted with the partnership. 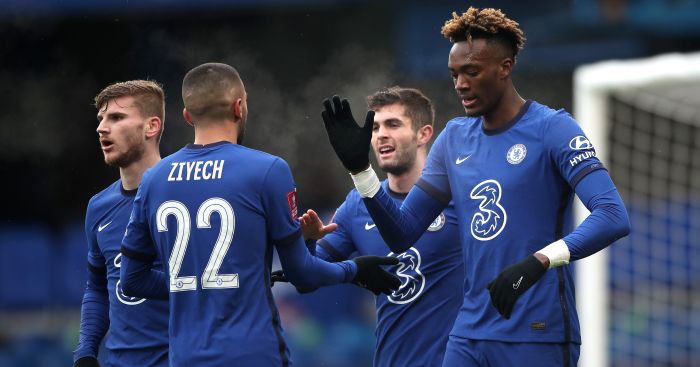 He added: “I thought the two in midfield were great. Their movement of the ball, their discipline, it’s something we can look at going forward.”

Gilmour has linked with a potential exit for more game time this month, but the Blues boss admitted that is unlikely.

“With his youth and the injury he had, and with the run we’ve been on, it’s about finding the right time to bring him in.

“For the short term, he won’t be going out on loan but we’ll keep that open a little until the end of the month.”

Werner’s struggles in front of goal continued as he missed a late penalty, although his overall performance was good.

And Lampard added: “I’m disappointed for him. He gave a lot with his performance and it’s just one of those things when things are quite not going for you.”

There was also a rare outing for keeper Kepa, but he fluffed his lines with a mistake for Luton’s goal.

Lampard, however, refused to criticise his former No.1, stating: “ll give Kepa that one. I’m as annoyed as we let someone stand in our box and get a shot away. It’s a general team moment.”

Lady Gaga’s grandma happy that beloved dogs are back safe

What Is A Serum? Here’s Your Guide to the Skincare Powerhouse

‘More people are going to die’: Immigrant detainees wonder when they’ll get vaccinated

Buffett upbeat on U.S. and Berkshire, buys back stock even as pandemic hits results