Researchers in the United States have demonstrated the effectiveness of messenger RNA (mRNA)-based vaccination at protecting against infection with severe acute respiratory syndrome coronavirus 2 (SARS-CoV-2) among almost 47,000 healthcare workers.

The SARS-CoV-2 virus is the agent responsible for the ongoing coronavirus disease 2019 (COVID-19) pandemic that has now claimed the lives of more than 3.73 million people globally.

The team from the Cleveland Clinic in Ohio found that full immunization (14 days or more since receipt of the second dose) with either Pfizer-BioNTech’s BNT162b2 vaccine or Moderna’s mRNA-1273 vaccine was 97.1% effective at preventing SARS-CoV-2 infection.

Furthermore, one vaccine dose was 89.2% effective at preventing infection within just seven days.

Nabin Shrestha and colleagues say that although clinical trials have already found the vaccines to be highly effective, immunization efforts in the United States have been hampered by vaccine hesitancy among a substantial portion of the population.

The team hopes that hesitant individuals may be gradually persuaded to change their minds if multiple studies demonstrate the high efficacy and safety of vaccination in real-world settings.

“Our study’s findings add to the growing literature on the effectiveness of the mRNA SARS-CoV2 vaccines,” writes Shrestha and the team. “These findings are consistent with other studies that have examined this question using different approaches at different sites in the USA.”

A pre-print version of the research paper is available on the medRxiv* server, while the article undergoes peer review. 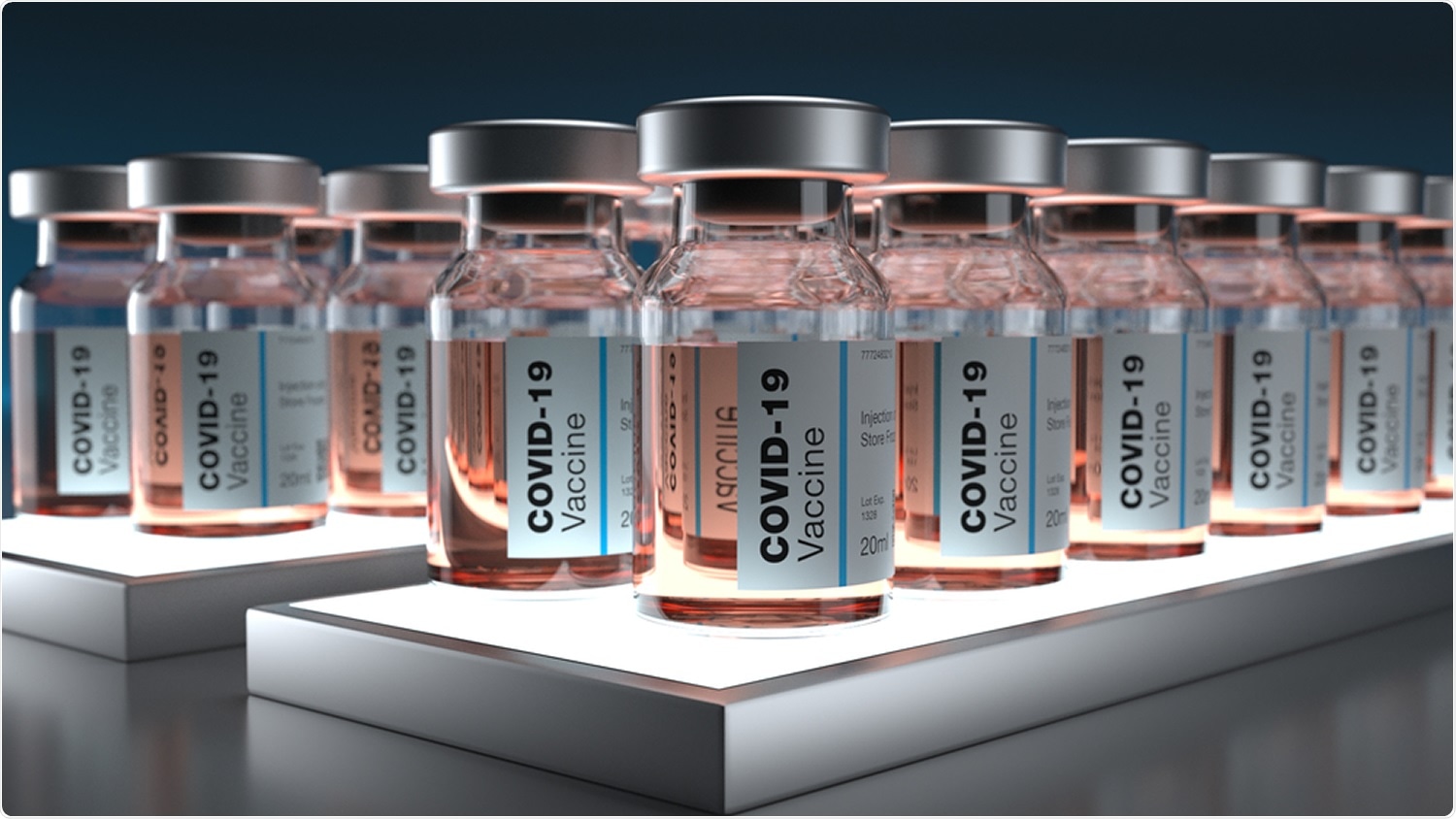 The vaccine effectiveness demonstrated so far

Clinical trials have already shown that mRNA-based vaccines are highly effective at protecting against SARS-CoV-2 infection. One vaccine was also shown to be similarly effective in extensive studies conducted in Israel. 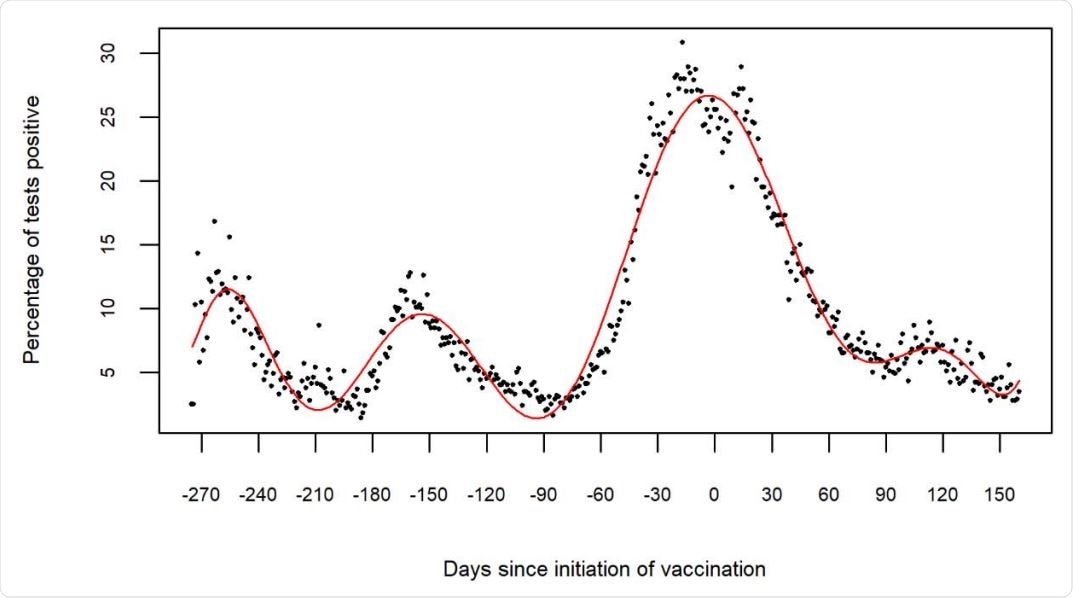 COVID-19 epidemic curve before and after vaccine rollout. Day zero on the x-axis represents the day vaccination began at the health system. Points on the scatter plot represent the proportion of tests that were positive on any given day. The colored line represents a fitted polynomial curve.

“Despite these spectacular findings, vaccination efforts in the USA have been hampered by vaccine hesitancy,” says Shrestha and colleagues.

Two studies recently showed that most personnel in a healthcare institution were either unvaccinated or only partially vaccinated when they became infected with SARS-CoV-2 and that the numbers of infected personnel fell as the number of days since vaccination passed.

“Additional studies that demonstrate a high level of vaccine effectiveness would confirm the suggestion from these studies that the vaccine is highly effective,” write the researchers.

The team says that any study of vaccine effectiveness requires reasonably complete information about vaccination status in a population, as well as data on the occurrence of COVID-19 in the same population.

“Since the onset of the pandemic, protecting personnel from COVID-19 has been critical for the functioning of our facilities, and it has been important for us to keep track of which employees have been afflicted by the disease and when, and which of them received the vaccine and when,” says Shrestha and colleagues. 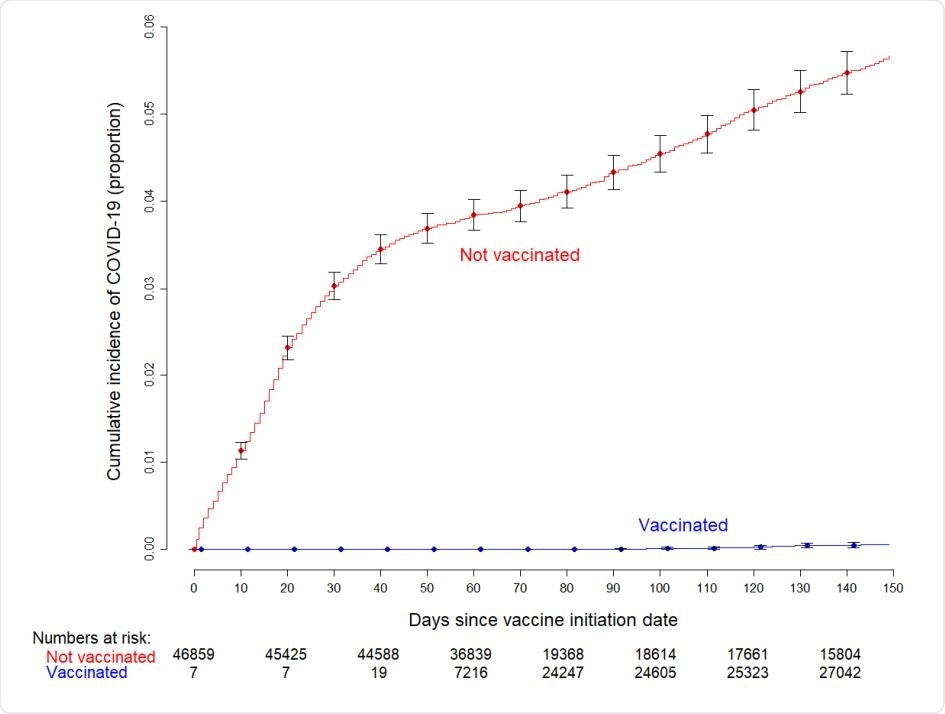 Simon-Makuch plot showing the cumulative incidence of COVID-19 among vaccinated and not vaccinated subjects. The curve for the not vaccinated group includes data for those who never received the vaccine at any point during the study and those who were waiting to become vaccinated. Seven subjects who had been vaccinated earlier as participants in clinical trials were considered vaccinated throughout the duration of the study. Twelve subjects who received their first dose in the first week of the vaccination campaign managed to get their second dose three weeks later, and were thus considered vaccinated earlier than 42 days since the start of the vaccination campaign.

What did the researchers do?

The researchers assessed data on employees within the Cleveland Clinic Health System who had not previously been infected with SARS-CoV-2 and were working in Ohio on December 16th, 2020, when COVID-19 vaccination began.

Shrestha and colleagues used Cox proportional hazards regression analyses to compare the cumulative incidence of SARS-CoV-2 infection over the next 5 months between those who received the vaccine and those who did not.

Employees were immunized with either Pfizer-BioNTech’s BNT162b2 vaccine or Moderna’s mRNA-1273 vaccine and polymerase chain reaction (PCR) testing for SARS-CoV-2 started at the clinic on March 12th, 2020.

The cumulative incidence of SARS-CoV-2 infection was significantly higher among the unvaccinated versus vaccinated individuals. 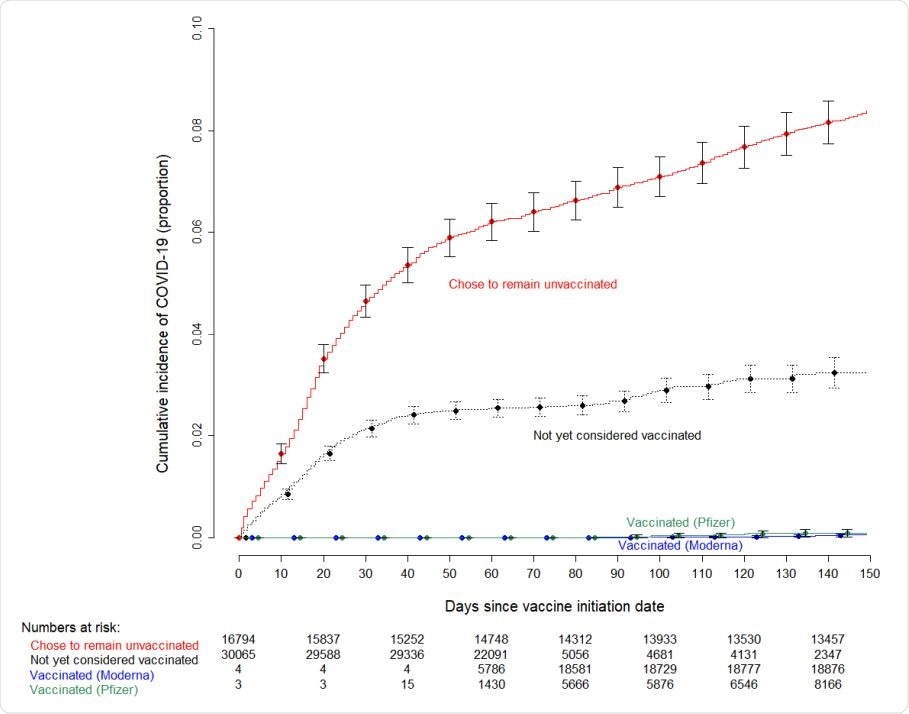 Simon-Makuch curve comparing the cumulative incidence for COVID-19 among those who remained unvaccinated, those not yet vaccinated (waiting to receive the vaccine), and those who received the Moderna or Pfizer vaccine. Seven subjects who had been vaccinated earlier as participants in clinical trials were considered vaccinated throughout the duration of the study. Twelve subjects who received their first dose in the first week of the vaccination campaign managed to get their second dose three weeks later, and were thus considered vaccinated earlier than 42 days since the start of the vaccination campaign.

Of the 2,154 infections that were diagnosed, only 15 (0.7%) occurred in vaccinated individuals.

After adjustment for age, job type, and the slope of the epidemic curve, vaccination was associated with a 97.1% reduced risk for infection.

Additionally, vaccine effectiveness was 89.2% within just seven days and 95.0% within just 14 days of the first vaccine dose.

“There appeared to be substantial protection from SARS-CoV-2 infection within a few days of the first dose of an mRNA vaccine,” writes Shrestha and colleagues.

“The latter group would have largely included individuals who opted not to receive the vaccine despite ample opportunity to do so,” writes the team. “The difference in cumulative incidence of the infection suggests different risk avoidance behaviors in those willing and unwilling to take the vaccine.”

The vaccine efficacy is similar to that reported in clinical trials

The researchers say the 97.1% vaccine efficacy reported here is similar to that reported in previously published clinical trials and in large studies in Israel. 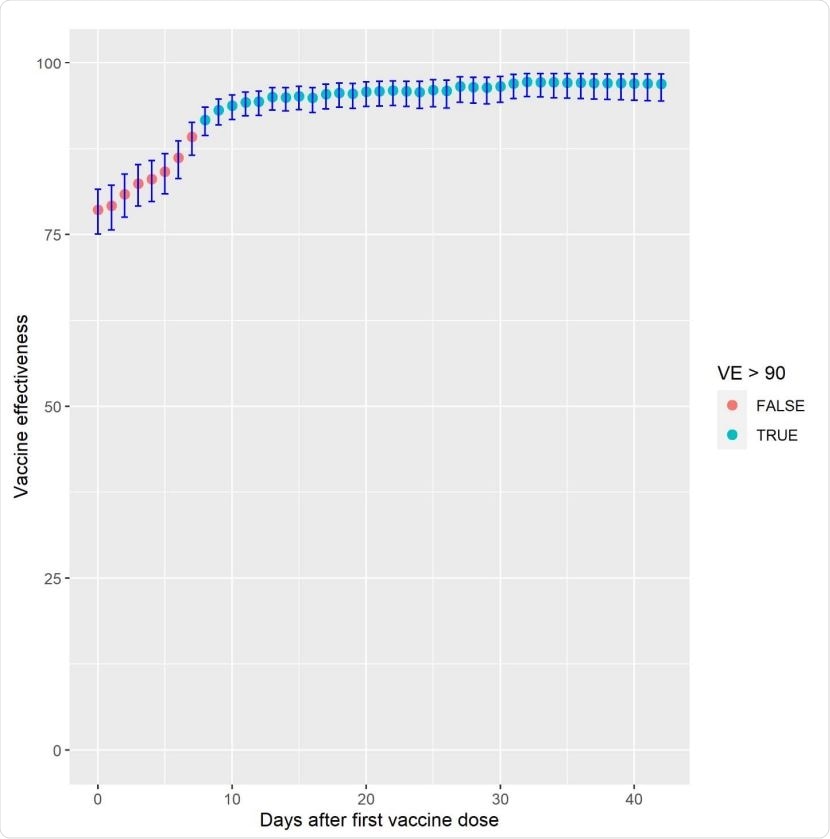 Furthermore, the high rates of vaccine effectiveness even within a few days of the first dose suggest that vaccination may be protective well before the second dose is administered, they add.

“The Pfizer-BioNTech and Moderna vaccines are highly effective in protecting individuals among the working-age population from SARS-CoV-2 infection in real-world conditions in the USA,” writes the team.


“The vaccines may provide substantial protection long before receipt of the second dose of the vaccine, and SARS-CoV-2 infection in this population at this time is occurring almost exclusively among those not vaccinated,” concludes Shrestha and colleagues.

It has been 2 years since every time I eat, I feel nauseous. I was not a heavy eater before, but right now the usual servings I eat is just half of what I ate before. If I have too much, I would have to vomit it all. What is happening to me?

The 22 Best Fisherman Sandals to Wear this Season