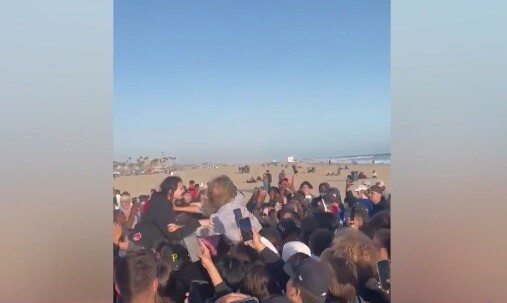 Nearly 150 people were arrested in Huntington Beach on Saturday after a man’s TikTok video inviting people to his birthday party went viral and the city was overrun with unruly revelers, prompting authorities to issue an emergency overnight curfew, police said.

The event, dubbed Adrian’s kickback, drew at least 2,500 people, who initially gathered at the beach and then moved to the downtown area, the Huntington Beach Police Department said in a news release.

Some people allegedly threw bottles, rocks and fireworks at police officers, prompting a request for assistance from other agencies, according to the Police Department. More than 150 officers from virtually all agencies in Orange County responded, police said. They had been standing by after police became aware of the social media posting earlier in the week.

Social media posts Saturday night showed mobs of people, with some setting off fireworks or climbing up signposts downtown. Police were shown firing less-lethal rubber bullets at those who refused to disperse, as well as using tear gas.

Police declared an unlawful assembly in the downtown area at 7:13 p.m. and put the curfew in effect at 11:30 p.m. for everyone in the area of Beach Boulevard to Goldenwest Street and Pacific Coast Highway to Yorktown Avenue. The curfew expired at 5:30 a.m. Sunday. Many of the partygoers apparently did in fact break the curfew and stay downtown into the early morning hours, according to social media posts.

The charges for the 121 adults and 28 juveniles taken into custody included vandalism, failure to disperse, curfew violations and fireworks offenses, police said.

No significant injuries were reported, but multiple downtown businesses and police vehicles were vandalized, along with a lifeguard tower, police said.

Susie Smith, owner of Makin’ Waves Salon on Main Street, was at her business until leaving shortly before 2 a.m. She reported that kids were on her roof, and the salon’s windows were tagged. “Awful and scary,” she said in a Facebook post.

Huntington Beach’s pier district has been the site of wild parties and large gatherings in the past. Most recently during coronavirus stay-at-home orders, the area saw regular “curfew breaker” demonstrations in which people gathered to protest the restrictions.