Olivia Harrison: “I Wanted People To Know About George”


More often than not, the identities of wives/girlfriends/partners of famous musicians are defined in association with their notable counterparts. Olivia Harrison, widow of George Harrison, incorrectly falls into this category. Prior to becoming romantically attached to George, the Mexican-American Los Angeles native worked for his label, Dark Horse Records. They fell in love and he took her back to England to his historic home, Friar Park.

Harrison recounts this ceremonial move in her poem, “My Arrival,” one of 20 in her latest book, Came the Lightening: Twenty Poems for George. Unlike her previous books: Concert for George (the companion to the Grammy Award-winning film of the same name) and George Harrison: Living in the Material World (the companion to the two-time Emmy-winning Martin Scorsese documentary), Came the Lightening is not an outward-facing, information-rich essential George Harrison product. Instead, it is a romantic and personal collection of poems that reflect the very intimate and sensual relationship between George and Olivia.

Came the Lightening includes a foreword penned by Scorsese, never seen before images of George and Olivia and stunning shots of Friar Park captured by Henry Grossman, Sue Flood, Mary McCartney (daughter of Paul) and Marcus Tomlinson, as well as a drawing by Klaus Voormann. It also has artifacts from the Harrisons’ endless vaults, meticulously maintained by Olivia and their son, Dhani.

In between her proactive philanthropic work with her multiple foundations, her duties as a board member of The Beatles Apple Corps of which she is a director, maintaining and ongoing releases from George’s wealth of material–the most recent of which is 2021’s All Things Must Pass 50thAnniversary Edition, film production including Peter Jackson’s Beatles docu-series, Get Back–Olivia Zoomed in from Friar Park to relive some of her cherished memories with George.

SPIN: Last year was the 20thanniversary of George’s passing. Was that the impetus for writing Came the Lightening?
Olivia Harrison: It just sort of bubbled up. I started writing and thought, if I keep writing maybe I could do 20 of them. I wanted people to know about George, that he was a good person, an essential person, a normal person. I wanted to send these poems out there for him.

You’ve written books before, all of them centered around George, but there was a degree of detachment to them. Here, you are very personal, letting readers into your relationship.
It’s very personal. It is entirely different. I wanted people to know who he was, that he had scars across its fingers, that he had a mole on his wrist [“Tuum Corpus”] and what he thought about guitars and the same shape of women and that he never hurt anyone [“HE: Never Hurt No One”], that he was a kind person and the very lushness of our relationship. I wanted to share those kinds of moments.

You have put forth some very intimate moments, like in “Without Hummingbirds,” where you say, “My hair like a vine curled around your finger as we lay face to face.”
George would always say something completely off the wall in all those little sweet little moments. I wanted to share those moments in that poem. I was very guarded all my life, and guarded in my life with George, very guarded. Now, I’m liberated from that. He’s not here, and it’s like humanizing him and humanizing us. I want to show people how treasured George was by me.

How did you decide on poetry as the form for the book?
It chose me. I had a little episode, a “funny turn” as we call it in England. A neurologist friend of mine suggested I rest and read poetry for three days, which was the most amazing prescription a doctor could have ever given me. That’s when it started. Something shifted in me that allowed me to access poetry. Some of it’s clumsy, some of it’s narrative, some of it’s kind of like a rap. I don’t know the rules. I just wrote it all down, got it all out. It was the only way I could get to the depths of feeling. I couldn’t write that in an autobiography. I couldn’t write it in a straight way. I just couldn’t get there. 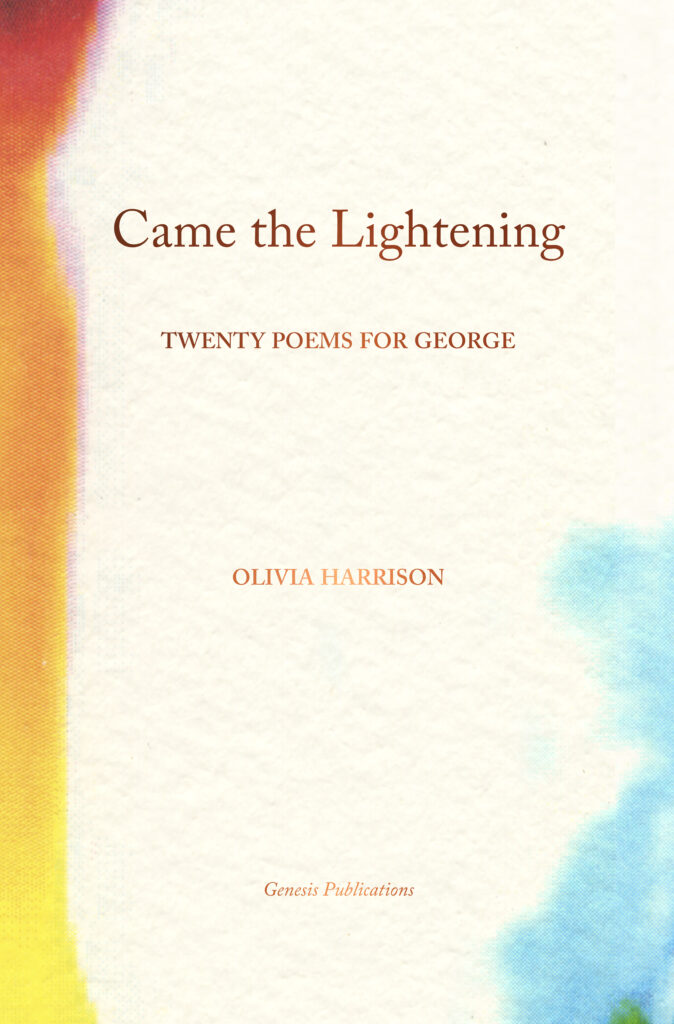 Did you find poetry easier to write than prose?
If I had written a straightforward autobiography, I think it would it would turn back into poetry because I would feel too intensely about things. Sometimes emotions speed up. I might start something in a certain way and then I would start feeling something and it would just go faster and faster. There’s an emotional rhythm there. It was like curling up something very tight, trying to distill it into a little elixir, as opposed to a big pool.

It wouldn’t have been possible for you the share that level of intimacy in a prose book.
I couldn’t have. This is as personal as I can possibly get. A lot of my peers and friends in the music business have written autobiographies and they’re great. But I didn’t want to be telling stories about other people. I’ve read a few by wives and girlfriends. I’m not sure I could do that, nor would I want to. I think it would be boring for me.

Did you commission all the artwork and imagery for the book?
I have a friend who was photographing the garden for a couple of years with the idea of doing a book about the garden, which turned out to be this book. I think I was trying to do anything but this book. It was stewing and I was feeling a lot. I try not to be too literal with photographs, but I thought it was nice to share some.

Do you feel a release or a relief now that the poems are out? That something you were holding onto is not holding onto you anymore?
I do. It’s not easy to get rid of physical stuff, never mind all these deep feelings. Over the last couple of years, everybody had time to stop and clean their cupboards. Maybe this was part of lockdown too. I got a chance to actually stop and get this “cupboard” sorted out. I needed to say these things. I needed to let them go. I needed them to be out there and, and to let people know that we felt just like they felt.