A team of scientists from the University of Texas, USA, has recently revealed that the P681R spike mutation is responsible for increased infectivity of the delta variant of severe acute respiratory syndrome coronavirus 2 (SARS-CoV-2). The P681R spike mutation increases the replication of the delta variant by increasing the dissociation of S1 and S2 subunits at the furin cleavage site. The study is currently available on the bioRxiv* preprint server. 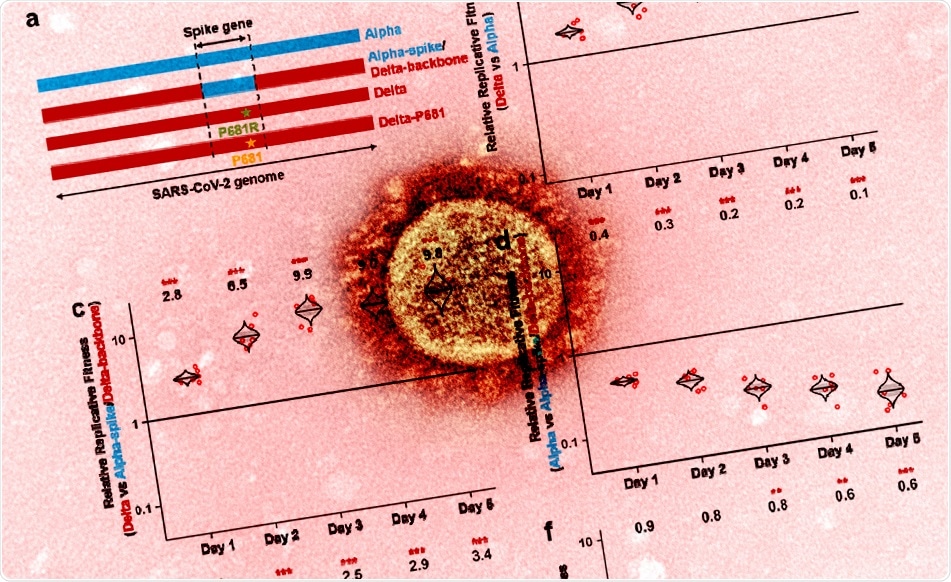 Among the recently emerged variants of SARS-CoV-2, alpha, beta, gamma, and delta have been designated as the Variants of Concern (VOCs) because of their significantly increased transmissibility, infectivity, and virulence. In the recent coronavirus disease 2019 (COVID-19) pandemic phase, the delta variant is predominantly circulating globally. Soon after its first identification in India in October 2020, the delta variant has rapidly spread to more than 119 countries and gradually replaced the previously dominant alpha variant.

The scientists prepared recombinant alpha and delta variants from infectious cDNA clones. They used a mixture of these recombinant viral variants to competitively infect human lung adenocarcinoma cells and primary human airway epithelial cells. By estimating the RNA ratio of delta versus alpha at different time points after infection, they observed that the delta variant has higher replication fitness than the alpha variant.

In contrast to other beta-coronaviruses of the B lineage, SARS-CoV-2 gains functional advantages by acquiring the furin cleavage site. At this site, the S1 receptor-binding subunit of the spike protein is cleaved and dissociate from the S2 fusion subunit, leading to the enhanced entry of the virus into host cells.

Given the significance of the furin cleavage site in viral entry, the scientists hypothesized that the P681R mutation might enhance the infectivity of the delta variant by increasing S1/S2 cleavage at the furin site. For validation, they generated a modified version of the delta variant carrying wildtype P681 instead of mutated R681.

Although the study findings indicate that the delta variant gains replication fitness by efficiently possessing the spike protein at the furin cleavage site, there remains a possibility that the enhanced replication might be due to improved spike – ACE2 (angiotensin-converting enzyme 2) interaction.

To exclude this possibility, the scientists performed a binding assay using recombinant viral spike and human ACE2. They observed that the alpha spike has a significantly higher affinity for ACE2 than the delta spike. These observations indicate that the replication fitness of delta variants is not associated with improved spike – ACE2 interaction.