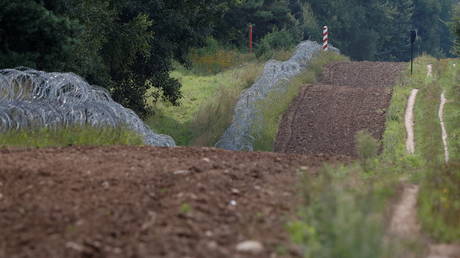 The Polish military has started constructing a barrier along the Belarusian border, with soldiers seen erecting barbed wire fences to halt the flow of migrants after thousands tried to enter the country in recent months.

The fence, which defense minister Mariusz Blaszczak this week said will be 2.5 meters tall and stretch for most of the 150-kilometer (93-miles) border with Belarus, is being constructed in a bid to stop the recent influx of migrants.

On Friday, Blaszczak posted photos on Twitter showing Polish troops putting a “razor wire” fence in place in “three-layer entanglements”. The minister also said 6km of fencing has been built at this point.

Thousands of migrants, believed to be traveling from the Middle East, are thought to have crossed or attempted to cross into Latvia, Lithuania and Poland from neighboring Belarus in the past few months. According to Polish border guards, in August alone they prevented 3,059 illegal attempts to cross the border, with Poland’s defense ministry increasing troop presence in the area. The EU has previously accused Belarus of engaging in a “direct attack” on the bloc and trying to “instrumentalize human beings for political purposes” by pushing migrants towards member state borders.

Belarus has refuted the EU’s assessment, but its leader Alexander Lukashenko has said he will not try to halt migrants from crossing into the bloc after its member states imposed sanctions on his administration following a disputed presidential election in 2020.

Back in July, the UN Refugee Agency (UNHCR) urged the Polish government not to attempt to block asylum seekers, urging it instead to provide them with protection in accordance with its international obligations.

“People fleeing war, violence and persecution need protection. Refusal to grant them entry at the border, without properly assessing their claims, is in dichotomy with the country’s obligations,” the UNHCR’s acting regional director for Europe, Anne-Marie Deutschlander, said.

On Wednesday, the European Court of Human Rights (ECHR) addressed the situation on the Belarusian border, requesting Latvia and Poland provide aid for dozens of migrants who are being forced to to wait at the EU border. Both states have stationed military officials on the border for the past 14 days to prevent the migrants from entering or making asylum claims, leaving them stranded.