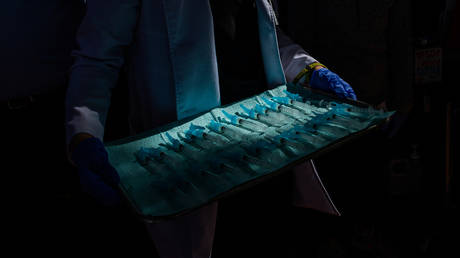 Qatar’s Foreign Ministry has said that Doha is offering Covid-19 vaccines to Afghan evacuees that are awaiting transit to go onwards to another country, with the state having helped to rescue tens of thousands of people.

On Thursday, Qatar’s Foreign Ministry released a statement announcing that the Gulf Arab state has so far assisted in airlifting over 40,000 people to safety from Afghanistan’s capital, Kabul.

The statement further read that a large number of students, families and journalists are temporarily staying in Qatar. Women, children and minorities are also among those to have been evacuated from Afghanistan to Doha.

As per the statement, all evacuees that are temporarily staying in Qatar are given a PCR test upon arrival and a Covid-19 vaccine if requested – yet it did not specify which jab. People in transit are also provided “accommodation, as well as healthcare, meals and basic necessities.”

Also on rt.com
WHO warns supplies in Afghanistan are a week away from running out

The Gulf Arab country boasts the largest US military base in the region and claimed that it “will spare no effort in supporting the people of Afghanistan through diplomacy, dialogue, and developmental projects to achieve stability and prosperity.”

Qatar’s offer of vaccines to evacuees follows warnings from the United Nations Children’s Fund (UNICEF) on Wednesday that there had been an “80% drop in people reached with Covid-19 vaccines” since the Taliban’s takeover.

Another alarming remark came from the World Health Organization (WHO) earlier this week that the war-torn country is only a week away from running out of core supplies. More than 500 tons of medical supplies, such as surgical equipment and malnutrition packages, were due to be delivered on Monday, yet restrictions imposed at Kabul airport prevented the shipment from being delivered.

Experts from the medical group fear that a lack of medical supplies, combined with a slow vaccination roll-out, could create a breeding ground for a disastrous Covid outbreak as seas of displaced people flock to find safety. According to data from the WHO, a meagre 1.2 million Covid vaccines have been administered across the 40 million-strong population of Afghanistan.