Queen of Sheba, a new collaboration album by Angélique Kidjo and Ibrahim Maalouf, tackles some serious subjects in telling the ancient story of the mysterious African monarch’s visit to King Solomon. And their telling of it was spurred by a mutual drive for Benin-born singer-composer-activist Kidjo and Beirut-born trumpeter-composer Maalouf to trace the links between their African and the Middle Eastern heritages.

But watch videos from the handful of performances they did of this material over the last few years — at Carnegie Hall, at the Netherlands’ North Sea Jazz festival, in the stately Basilique Saint Denis outside Paris — and one thing comes through clearly: They were having fun.

“A lot of fun,” says Kidjo, joined by Maalouf on a laughs-filled Zoom chat.

“It felt to me that I’m not even working!” says Maalouf, from his home in Paris, where he has lived since his family fled civil war when he was a boy.

That’s clear in the clips, the two of them in front of strings, horns, electric guitars, drums and various African and Middle Eastern instruments. Kidjo sings spiritedly in Yoruba, one of her native languages, her body and head wrapped in colorful West African print fabric. Maalouf alternately blows bright, modal lines, conducts the ensembles and skips exuberantly across the stage — sometimes all three at once.

“Both of us, we love being on the stage,” Kidjo says, from Avignon in the South of France where she is visiting. “We love the contact with the public. That’s where we live. If you see both of us on stage, just that beam of joy, beam of light.”

She traces that emanating beam with her hand, up from her short-cropped white hair.

“Man, we are so happy there!” says Kidjo, who has lived in New York for 25 years.

But there is the serious stuff. And with regal bearing, Kidjo makes a proclamation: It has never been “easy,” she states, “for women to be queen” in Africa.

She could be talking about herself. She is, unquestionably, global music royalty, forcefully breaking through imposed limitations and labels throughout an unparalleled career spanning four decades. Her five Grammy Awards give her the most wins by any African solo artist, the latest coming for 2019’s Celia tribute to Afro-Cuban icon Celia Cruz, and last year’s Mother Nature, spotlighting collaborations with such emerging African stars as Burna Boy and Mr Eazi. Among her other many wide-ranging ventures in recent years is her vibrant 2018 re-imagining of Talking Heads’ landmark Remain in Light.

Outside of music, she’s served as a UNESCO Goodwill Ambassador for 20 years, and with her Batonga Foundation, which she started in 2006, she focuses on the education of girls and young women in sub-Saharan Africa. Oh, and last year Time magazine named her one of the 100 most influential people in the world. 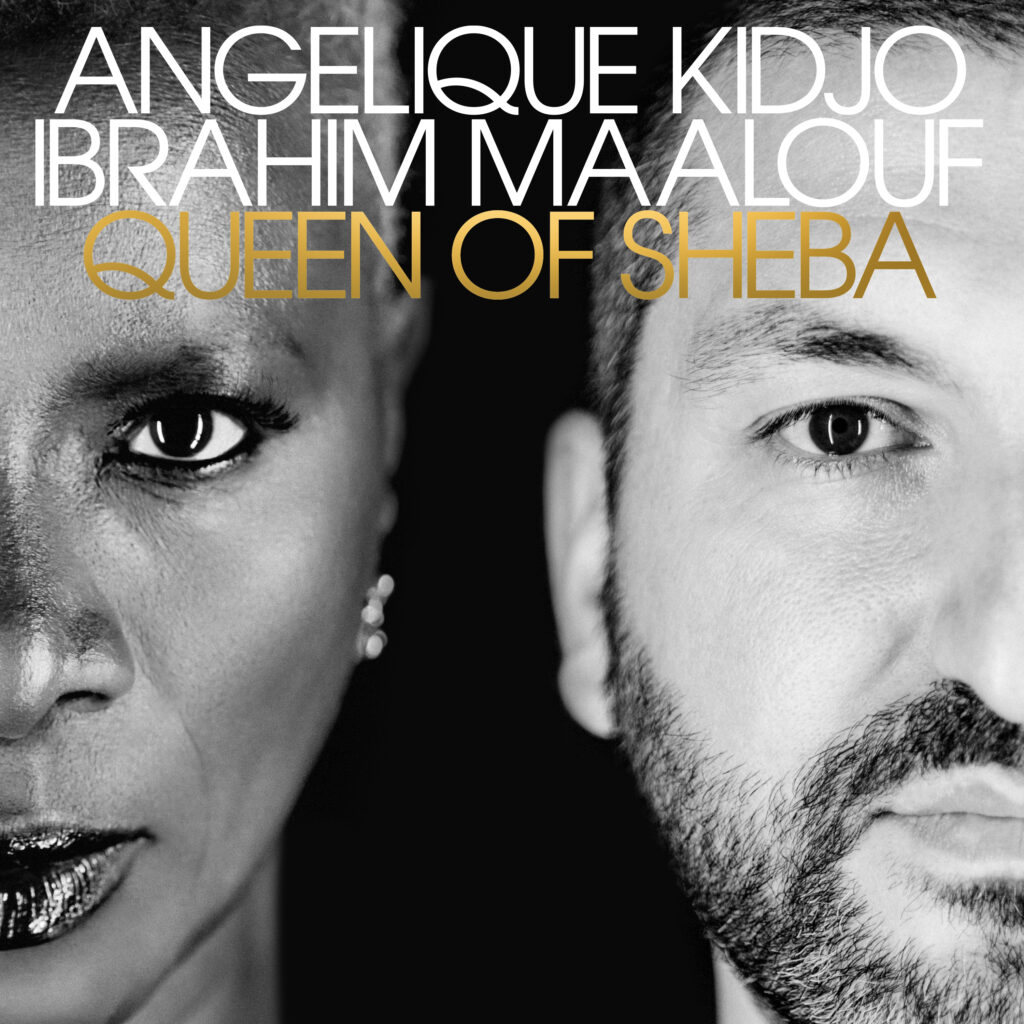 But of course she’s talking about the Queen of Sheba, Makeda by name, whose legend inspired this project after Maalouf reached out about working together.

He’s no slouch himself. A star in Europe, he’s known for his dynamic playing and innovative mixes of jazz, pop and classical, Middle Eastern and African traditions, and has performed with Wynton Marsalis, Sting, Archie Shepp and many others. Maalouf starts a world tour shortly, with his 17th album coming this fall, drawing on contemporary street culture. (A cinematic video of the first single, “El Mundo,” featuring Brazilian singer Flavia Cohelho and French DJ Tony Romera, has just been released.)

“We both are storytellers,” Kidjo says. “What is important to me is always to find a way to link us together, to build bridges. The first question that comes to mind was, ‘What was the link between Africa and the Middle East?’ One thing that kept on coming back in the history and geography, the many religions, one thing that was really mind-boggling was the Queen of Sheba that came from Nubia that went to go see King Solomon, the wisest of all.”

This is where she notes the difficulties being queen, “even in those times. Yet here she is, adamant to go talk to that wise king, to find out how she can lead her people better, how she can profit from that wisdom to be a queen that can be remembered for centuries to come.”

What struck her, and then Maalouf, was that variations of the tale appear in the traditions of the three major monotheist religions — Judaism, Christianity and Islam — as well as other cultures from West Africa to Ethiopia to Yemen and throughout the Middle East.

Like many, Maalouf knew of the Queen of Sheba, but little of the tale.

“Angélique said, ‘Oh yeah, it’s fascinating. You should read about it,’” he says. “I was like, ‘Wow, this is a beautiful story. We need to show people who are going to listen to the music that basically our cultures are sharing the exact same values.’”

The core for Kidjo was in dozens of riddles that the Queen asked Solomon to test his wisdom. She selected seven for the suite.

“I read so many riddles and basically those seven possess the values that can allow us to live with one another and accept our differences, and also be open to whatever comes your way,” Kidjo says. “For me it was obvious that the Queen of Sheba was a woman of wisdom. She was doubting her own power, doubting her ability to lead her people. All the things she was struggling with, she put them in riddles to ask Solomon. And in that quest to tap into her own power, she fell in love.”

In the Afro-jazz album opener, “Ahan,” Makeda asks Solomon, “Where will your power come from? From the gigantic scope of your armies? Then from what part of your body will give you this infinite power over men?” (Spoiler: It’s his tongue.)

Kidjo doesn’t merely pose the riddles. She uses them as vehicles for richly poetic first-person accounts in which the queen reveals much of herself — her character, her philosophy, her strengths and vulnerabilities, her desires and fears. And through her eyes we see Solomon, as they form their love and create a son (in some renditions he’s Menelik I, the first emperor of Ethiopia). Impressively, the fullness of Kidjo’s writing comes through even in printed English translations.

Why Yoruba, which most listeners will not understand? Kidjo, who is fluent in five languages, bristles some.

That set the task for Maalouf, who doesn’t speak Yoruba.

“The music of Ibrahim gave life to those riddles,” Kidjo says. “We wanted to be international. We want to share those values that are everywhere on the planet, in the music that can speak to [people], without them focusing on the language in which it is sung.”

Crucially, Maalouf’s compositions don’t settle in specific cultural tropes, nor are they amalgams from bits of readily identifiable sounds and styles in a world music collage. It’s his nature to avoid such obvious (and often tedious) approaches, as it is Kidjo’s. And now, with more concerts being planned for North America and Europe next year, he’s excited about sharing that live again.

“There are people who come after the concerts and they tell me, ‘Wow, so that means that anything can mix with anything?’” Maalouf says. “I say, ‘Yes! Are you surprised?’ It doesn’t have to sound like you’re mixing. It just has to sound natural. And when it’s easy, it’s like magic. When you see someone doing magic, if you see that there’s a trick, then it’s not magic any more.”

How to Watch Santos vs. Hill: UFC Fight – Billboard