Record Number Of Police Murders-Half Did Not Engage Their Assailants 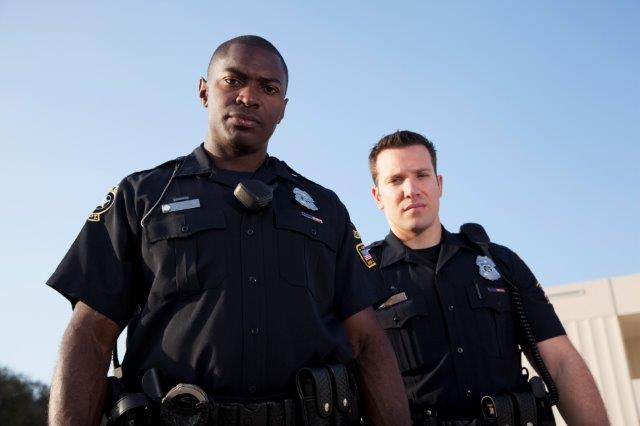 A police officer is murdered every five days. Nearly half did not engage with their assailants before being attacked-highest in 30 years.

The highest number of officers feloniously killed in the line of duty since the 9/11 attacks.

I appreciate the assistance from the FBI’s public affairs team in creating this article.

I was reading about crime data (65,000 more people victimized by violent crime than the year before) when I came across the FBI’s police mortality data.

I read no fewer than thirty commercial and justice-related news sources every week; few mentioned the fact that we are at record highs for police officer deaths.  It was ignored by most via a Google news search.

What is really shocking was the fact that nearly half of murdered police officers did not engage their attackers designated as “unprovoked.” Unprovoked is defined by the FBI as “An attack on an officer not prompted by official contact at the time of the incident between the officer and the offender.”

FBI data shows 73 officers were feloniously killed in the line of duty in 2021 — nearly half of whom did not engage with their assailants before being attacked, FBI Director Christopher Wray said in January.

“These four murders brought the total number of officers feloniously killed in the line of duty in 2021 to 73, the highest annual number since the 9/11 attacks,” Wray wrote. “That’s the equivalent of one officer murdered every five days. In a year when homicides and violent crime reached distressing levels, this 20-year high hasn’t received the attention it deserves.”

Nearly half of the 73 officers killed did not engage with their assailants before being attacked, Wray said.

Additionally, three of the FBI’s own agents were killed in 2021, including Special Agents Laura Schwartzenberger and Daniel Alfin, who were murdered while investigating crimes against children, and FBI Task Force Officer Greg Ferency, who was killed in an ambush outside an FBI office.

Last year marked the deadliest for line-of-duty police and law enforcement officers since 1930, with 458 officers dying in 2021. COVID-19 was the leading cause of death and firearms-related deaths were the second-leading cause.

COVID-19 accounted for 301 deaths, or 66%, of the 458 fatalities reported last year, according to preliminary statistics released by the National Law Enforcement Officers Memorial Fund (NLEOMF). The NLEOMF recorded 62 firearms-related officer deaths – 16 less than the FBI’s count.

The figure accounts for all line-of-duty deaths through Dec. 31, 2021, and represents law enforcement officers at the federal, state, county and municipal levels.

The graph on police officer deaths from the FBI (below) is hard to read. It was scaled down to fit this page. See the FBI-Crime Data Explorer and download.

The 73 law enforcement officers feloniously killed in 2021 represent a 58.7 percent increase compared to the 46 officers killed in 2020 and the highest total since 2011.

Of the 73 felonious deaths in 2021, 61 involved firearms, 6 involved vehicles used as weapons, and 4 involved personal weapons.

Of the 46 total felonious deaths in 2020, 41 were firearm-related, 4 were vehicle-related, and 1 involved personal weapons.

The preliminary reporting of 24 unprovoked attacks resulting in officer deaths remains a concern, because this circumstance significantly outpaced all other felonious officer deaths in 2021 and reached the highest total in over 30 years of reporting.

The southern region had the most law enforcement deaths with 69 deaths total (44 felonious, 25 accidental). 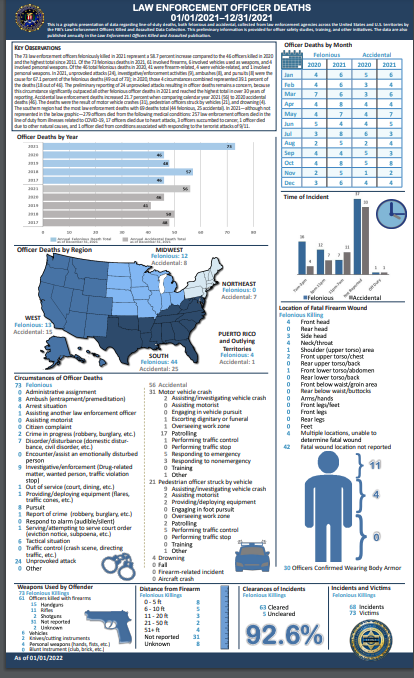 The data above was mentioned when 60 Minutes interviewed FBI Director Christopher Wray and that prompted a small number of regional articles. It was also offered by Law Enforcement Today; I added additional details with the help of the FBI.

The FBI’s police mortality data wasn’t totally ignored but the lack of mainstream media coverage is distressing. As the FBI’s director stated, officer deaths haven’t “received the attention it deserves.”

We have skyrocketing violence and fear of crime yet police proactivity, overall employment, arrests, and correctional numbers are down considerably.

But downplaying the record number of police officer deaths and not acknowledging that close to half feloniously are unprovoked should lead the country into some serious soul searching. We are losing a lot of officers. We have over 65,000 additional violent crimes.

A Good Way to Frame the Inflation Debate