By Craig Page: Regis Prograis (28-1, 24 KOs) came away impressed with the power of his opponent Jose Zepeda (35-3, 27 KOs) after stopping him in the 11th round last Saturday night at the Dignity Health Sports Park, Carson, California.

“I really feel he will be a champion, but it just wasn’t his night tonight,” said Regis Prograis at the post-fight press conference, talking about Jose Zepeda.

“It just took a little while before I could start finding him. I remember hitting him with a left-hand body shot, it was real hard, and it hurt him. I want to stay at 140. 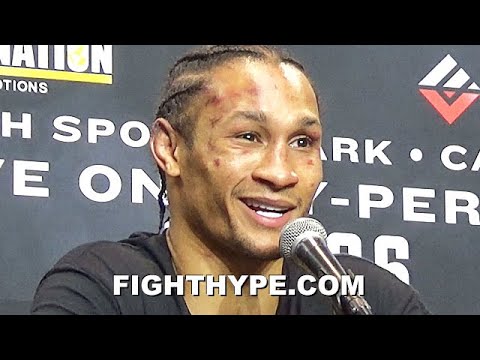 “Everyone knows that if I had a hit list, Josh Taylor would be on my hit list. I think there will be a lot of opportunities out there for me, but we’ll see what they say.

“Yeah, he was probably the toughest guy I’ve fought,” Prograis continued. “He took a lot of punches. He hit hard. You can tell by his knockouts that he does have a lot of power.

“He was quicker and did have a good jab, and he was strong. He probably was my most formidable opponent, if not my toughest opponent. By the third round, I started moving my head, and he was missing a lot of punches.

“When I moved my head, his jab was going over my head. When I started boxing, that’s when he started running into punches.

“I feel like I showed a complete package. Of course,” said Prograis when asked if he thinks fighters will want to face him next. “This thing [WBC belt] is like gold. The last three years,  nobody was saying my name. Now I have this, and everybody is going to start calling me out.

“I just saw that he was hurt. Once I saw he was hurt, I went for the kill. Earlier, I thought I would get an early stoppage because he was cut. The referee said that he was cut and the cut was caused by a punch.

“Jose Ramirez has been ducking me for five years. Now that I got this belt, he wants to fight me. I’m trying to be more humble.

No one should die from AIDS, says UN official