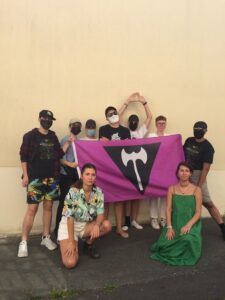 Résistance Lesbienne is a grassroots activist group “behind the action for lesbian visibility and against GBT lesbophobia.” Following the attack, they Tweeted: “We are the lesbian pacifists who proudly affirmed our homosexuality at Pride Bordeaux, and a transgender member of Antifa tried to burn our banners and our legs with a flare.”

As Résistance Lesbienne’s footage shows, they were marching peacefully. The group carried a banner with their name, the Labrys (a symbol of lesbian pride), and two interlocking signs of Venus. Their chants translate as “lesbian, not queer” and “lesbians don’t like penises.”

Lesbians around the world are punished for rejecting sex that involves a penis. For decades, violence has been weaponized as a way of forcing lesbians into heterosexual compliance. From conversion therapy to corrective rape, this history is brutal. And now – at a Pride March – lesbians are threatened with burning because they claim same-sex attraction.

Team AfterEllen condemns violence against lesbians and stands in solidarity with Résistance Lesbienne.