The previous two weeks were relatively quiet, but starting with tonight’s junior welterweight showdown between No. 1-rated Regis Prograis and No. 3-rated Jose Zepeda there will be plenty of action between Ring-rated fighters until the end of 2022. (Next Saturday’s anticipated rubber-match between Ring junior bantamweight champ Juan Francisco Estrada and No. 1-rated Roman “Chocolatito” Gonzalez is as good as boxing gets.)

However, there were two standouts from the Ring’s rankings who were in action on Nov. 11 and Nov. 19 – Sunny Edwards and Jaime Munguia. 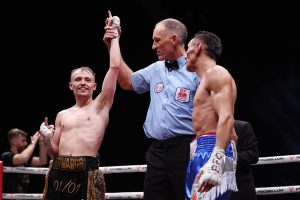 Edwards (19-0, 4 KOs) defended his IBF flyweight title for the third time with a brilliant performance against Felix Alvarado in Sheffield, England. The 26-year-old London native was both ring savvy and gutsy in scoring a competitive but clear unanimous decision.

Edwards entered the bout as The Ring’s No. 2-rated flyweight. Alvarado (38-3, 33 KOs), a fearsome former 108-pound titleholder from Nicaragua, entered the bout rated No. 9 at 112 pounds. The aggressive 33-year-old veteran had won 20 consecutive bouts dating back to 2014 and had previously been ranked as high as No. 1 at junior flyweight.

Anson Wainwright suggested moving Edwards to the top spot in the flyweight rankings and the rest of The Ring Ratings Panel gladly co-signed.

Munguia (41-0, 33 KOs) overwhelmed Gonzalo Coria within three rounds in Guadalajara, Mexico. It was another stay-busy bout for the unbeaten Tijuana native, who was The Ring’s 2017 Prospect of the Year and a former 154-pound beltholder. Munguia has won seven in a row since moving up to the middleweight division in 2020, but he’s only faced a few notable opponents (Spike O’Sullivan, Tureano Johnson and Gabriel Rosado).

Although Munguia has only defeated one Ring-rated middleweight, Kamil Szeremeta (No. 6 at the time), he’s risen to No. 4 in the rankings, in part because of fading veterans – such as Sergiy Derevyanchenko and Ryota Murat – dropping down the top 10, but also because of his continued success.

Stopping unrated Coria did not warrant an advance in the rankings, but it was enough to earn the 26-year-old volume puncher the Fighter of the Week award. 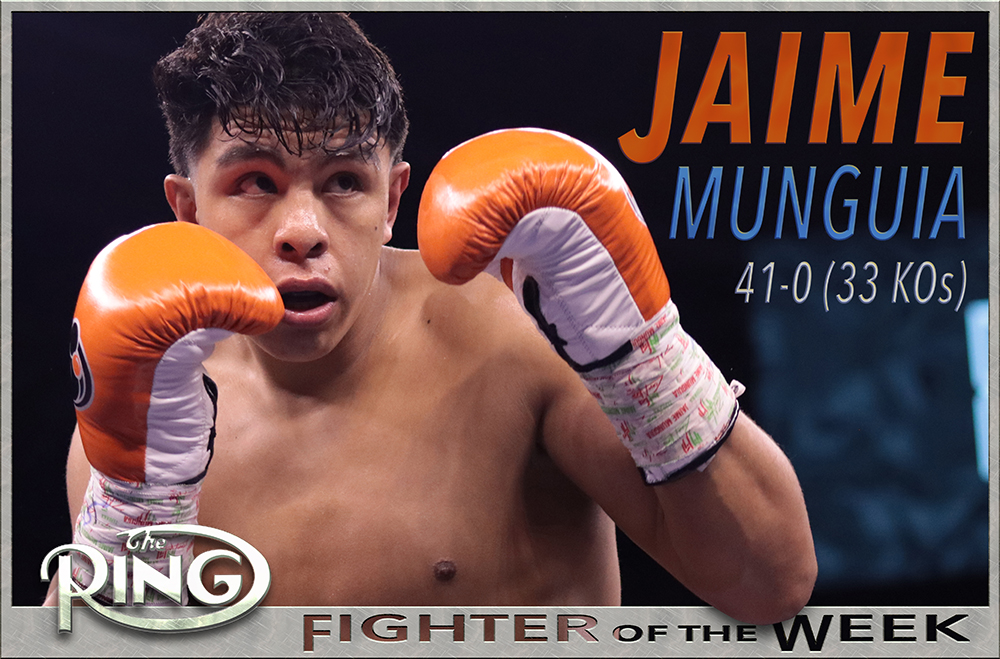 Now it’s time for Munguia to try to earn a second world title in 2023.

Since it was a slow period and there wasn’t much to discuss or debate, your favorite Editor-In-Chief proposed that the Ratings Panel share their thoughts on The Ring’s 2022 Awards.

“I know there’s more elite-level boxing scheduled this month and in December, but I’m just asking for four or five candidates in each category,” said Yours Truly. “We’re not deciding on any winners yet.”

Here are The Ring’s annual awards:

Fighter of the Year 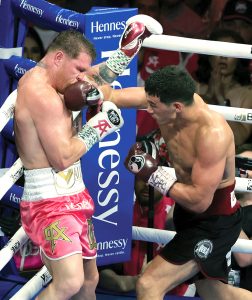 Bivol takes it to Canelo. Photo by Ethan Miller/Getty Images

Fight of the Year

KO of the Year

Comeback of the Year

Trainer of the Year

Event of the Year

Upset of the Year

Performance of the Year

Usyk and Lomachenko return from fighting in Ukraine

Women’s boxing on the upswing

Gray did not have any nominees for Prospect of the Year or Round of the Year.

“Lots of guys for potential Prospect of the Year. I’d suggest Keyshawn Davis and Bruce Carrington to get the ball rolling.” 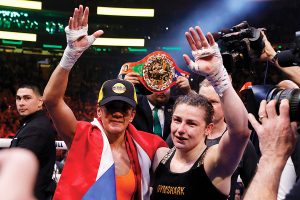 “Yeah, I pondered Taylor-Serrano (and Shields-Marshall deserves a shout too), but there are usually separate awards for the women.

“That’s been the case in past years. Maybe it’s worth changing it.”

“I think the unwritten rule of keeping the male and female annual awards separate is worth changing, and I believe that Taylor-Serrano is worthy of being included as an Event of the year candidate AND a FIGHT of the Year candidate.”

“I like Tom’s list. I’d include the IBHOF triple induction weekend in Event of the Year. Also, I know it’s not the same vibe, but the (Conor) Benn positive test was absolutely a happening of epic proportions.

“I’m all for leaving the sports washing countries OUT of the Event of the Year.”

“I’d say Grant Smith is worth a mention in Trainer of the Year… guy gets almost no props. Sunny Edwards and Dalton Smith have both impressed.

“I like Galal Yafai as a Prospect of the Year contender.”

“The Liam Paro KO of Brock Jarvis was decent as a finisher and a considerable upset for many.

“Billy Dib and his outlook taking on cancer is inspirational to me.

“Jordan Gill’s comeback win over Guerfi was a KO of the Year and Fight of the Year contender.

“Honourable mention somewhere for Hekkie Budler’s big win in Mexico. Maybe not with hindsight, but Magsayo-Russell was an upset.”

“KO of the Year contender – Issac Hardman KO 1 Beau Hartas. Check this out if you haven’t seen it. Was on Briedis-Opetaia undercard. Incredible shot.”

Senior Editor Brian Harty helped out with Round of the Year candidates.

“I googled ‘round of the year’ and came up with some fight-report mentions on various sites from the past year. Just food for thought – always seems like a tricky category:

Jordan White-Derrick Murray, Round 8 (can’t find any video of this one)

“I think Taylor-Serrano should be in the mix for any award. One of the narratives around the fight was that it had transcended the male/female divide.

Most Inspirational: Loma, Usyk for what they went through in Ukraine, Kiko Martinez, Roman Gonzalez (two of boxing’s good guys) 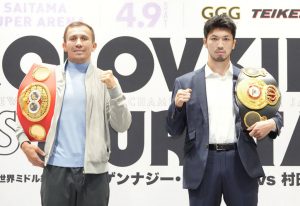 Added Daisuke Sugiura: “Not a lot to add to the list of Tom and Anson, but I’d like to nominate Golovkin vs. Murata for the Event of the Year. It took almost two years for the fight to finally materialize. That one was Mr. Honda’s Moby Dick. I heard that Team Teiken spent approximately three hundred thousand dollars for Golovkin’s expenses alone because they had to rent a floor of an expensive hotel during the pandemic. Also, the fight was the first boxing event streamed by Amazon Prime Video in Japan, which is truly epoch-making. We will see a lot of big fights in Japan from now on because of them getting into the boxing business. Kenshiro vs. Kyoguchi wouldn’t have happened without Amazon Prime.” 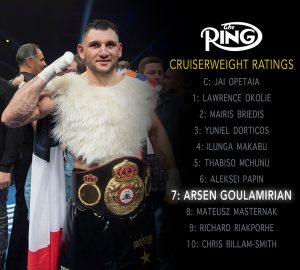 Cruiserweight – Arsen Goulamirian, who had been dropped from the rankings due to inactivity, re-enters at No. 7 following a decision over unbeaten (11-0) but unrated Alexsei Egorov.

“Goulamirian to re-enter our rankings. He has made Gary Russell Jr. look active!” noted Wainwright. “I could see him coming in as high as No. 5 but due to his inactivity, maybe No. 7 would be fairer?”

Abramowitz and Diego Morilla agreed with the No. 7 rankings.

“I’ll go with Goulamirian at No. 7 or lower,” said Morilla. “He did look good in that fight, but there are some great fighters in the division who deserve more respect for being more active.”

Middleweight – Munguia remains at No. 4. Janibek Alimkhanuly remains at No. 5 after scoring a 12-round unanimous decision over unrated Denzel Bentley.

“Jaime Munguia stayed active with a routine third-round stoppage over Gonzalo Coria,” noted Wainwright. “Hopefully, there’s something bigger for the Mexican next year. The only thing I took from this was he could still make 160, having weighed 165 in his previous fight.”

Flyweight – Edwards advances to No. 1. Alvarado remains at No. 9.

“Edwards retained his IBF title with an impressive display against Felix Alvarado, who also put up an excellent fight,” noted Wainwright. “Edwards to No. 1 and keep Alvarado where is ranked. He probably would have beaten other fighters on the list. I’d move up over (No. 8-rated Jackson) Chauke but it was a loss.”

Email Fischer at [email protected]. Follow him on Twitter and IG at @dougiefischer, and join him, Tom Loeffler, Coach Schwartz and friends via Tom’s or Doug’s IG Live most Sundays.