Rockies’ Trevor Story on hold with elbow injury; game vs. Pirates rained out 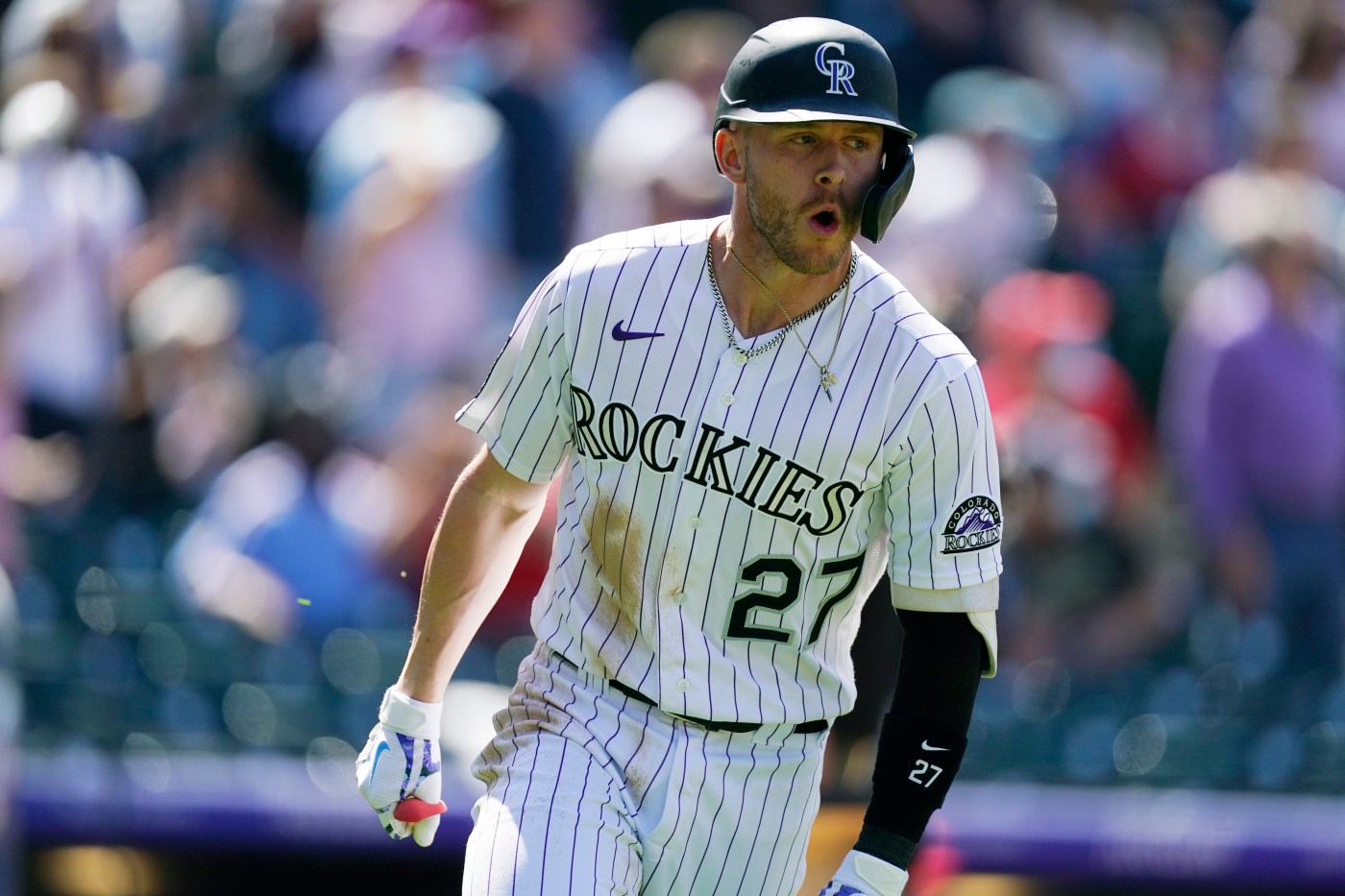 Trevor Story remains in wait-and-see mode as he deals with an injury to his right elbow.

The Rockies’ all-star shortstop continued treatment Friday for tightness in his elbow and forearm as the club prepared for a weekend series at Pittsburgh.

Friday night’s game was postponed due to rain, and the Rockies and Pirates are now scheduled to play a split seven-inning doubleheader on Saturday. The first game will begin at 10:05 a.m. (MDT), with the second game slated to begin at 2:05 p.m., or approximately one hour following the conclusion of the first game. Rain, however, is in the forecast for Saturday as well.

Rockies manager Bud Black said Story “was feeling a little better,” adding, “the tightness is still apparent in the forearm and around the elbow, but not quite as much as it was (Thursday) night.”

Black said that if Story needs to undergo tests, such as an MRI, the Rockies would wait until the team returns to Denver on Monday.

Story hurt his arm Thursday in the third inning of the second game of a doubleheader against the Mets in New York. Story scooped up Cameron Maybin’s grounder and then made a spinning throw to first baseman C.J. Cron, nipping Maybin for the out. Story did not return to the game.

Black said he was uncertain if Story would be able to play this weekend. If he’s not, the Rockies would use Brendan Rodgers and Garrett Hampson at shortstop.

Story is eligible to become a free agent at the end of the season and there is a chance the Rockies will trade him before the end of July. If the elbow injury is significant, it could preclude a trade.

This is not the first time Story has dealt with an injured right elbow.

Toward the end of the 2018 season, Story was placed on the injured list with an elbow strain caused by a throw to first base. Story left a Sept. 17 game at Dodger Stadium and did not play again until Sept. 24 as the Rockies and Dodgers battled for the National League West title.

The 2018 injury required an MRI, and although it revealed some inflammation in his elbow, the joint checked out OK and Story’s ulnar collateral ligament was fine.

The Dodgers eventually won the NL West title, beating the Rockies, 5-2, in Game 163.

“He’s got to use the whole field, get out of pull mode and swing at strikes,” Black said. “A lot of times when guys are chasing hits, they’ll extend the zone. He’s got to take his walks if they expand the zone.”

Tapia, who’s a demonstrative player, has displayed his frustration by slamming his bat and his helmet, but Black said he’s not concerned about that.

“There’s been some emotion, right? He wears it on his sleeve,” Black said. “That’s fine, he’s getting it out of himself. He cares, man, he wants to get hits.

“At times, in some ways, that can impact a guy; his emotions getting out of control. But it doesn’t seem to affect ‘Tap.’ ”

Footnotes. Lefty reliever Ben Bowden (shoulder strain) is getting closer to returning to the bullpen. Bowden, currently at Triple-A Albuquerque, threw in a simulated game on Thursday and is scheduled to make his first rehab appearance on Saturday at Sugar Land, Texas. The Rockies will monitor Bowden to see how many rehab appearances he will need. … First baseman Matt Adams (right shin contusion) has fully healed and the club will likely make a decision on Sunday or Monday if he’ll be brought back to the 26-man roster. In two rehab games at Triple-A, on Tuesday and Thursday, Adams was 0-for-7 with three strikeouts.

Gray has not won since May 5 vs. the Giants, despite posting a 3.86 ERA over his past four starts. The right-hander is 4-1 with a 2.36 ERA at Coors Field but 0-3 with a 6.32 ERA on the road. In four career starts, he is 1-1 with a 7.78 ERA against the Pirates. He last faced Pittsburgh on May 22, 2019 at PNC Park where he picked up the win, allowing three earned runs across seven innings, with seven strikeouts and just one walk. Keller is making his 10th start of the season. He’s coming off a loss at Atlanta where he gave up five runs on eight hits over five innings. He did whiff six. He’s 0-4 in his last four starts at PNC Park after winning his first home start on April 10. Keller, 25, has never faced the Rockies.

Gomber has had some hiccups in his first season with the Rockies, but he’s been pitching well of late. Over his past five starts, he’s is 2-1 with a 2.67 ERA, 32 strikeouts, and just three walks. He’s fresh off the best performance of his career when he nearly pitched a complete game against the Mets in New York. In five games (one start) vs. the Pirates, Gomber is 0-1 with a 5.84 ERA. Brubaker is coming off a rough outing at Atlanta when he gave up seven runs on seven hits over 5 1/3 innings. After beating Cincinnati on May 11, the sinkerballer has lost his last two starts. He was 1-3 with a 4.94 ERA in 11 games (nine starts) with the Pirates in 2020 and ranked second among National League rookies in strikeouts with 48. He’s never faced the Rockies.

Trending: Ryan McMahon hit his 13th home run of the season Tuesday off Mets ace Jacob deGrom and has four homers in his past seven games.

At issue: The Rockies keep losing the close ones. After getting swept in a doubleheader in New York Thursday — 1-0 and 4-2 — the Rockies fell to 8-20 in games decided by two or fewer runs.

Peter Bol: The Sudanese-Australian runner who lifted a nation

30 Old-Fashioned Foods To Cook At Home