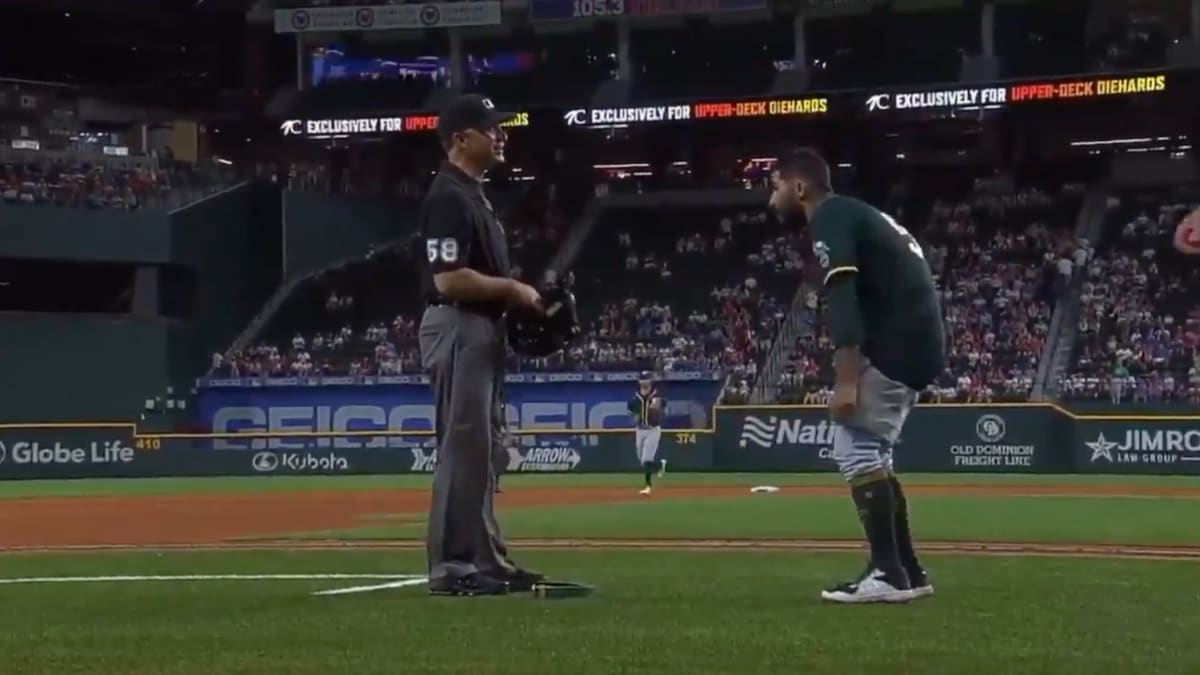 MLB pitchers are getting their first taste of life after sticky stuff this week and some are handling it better than others. On Monday, Jacob deGrom simply laughed when he became the first pitcher to be subjected to an inspection. Gerrit Cole actually offered himself up for inspection after his first two innings of work but didn’t get checked until after the third. For the most part, pitchers are cool with the random spot checks. Not Sergio Romo, though.

Romo pitched the seventh for the A’s against the Rangers in Texas Tuesday night. He gave up a 440-foot homer to Eli White with two outs in the inning, so he wasn’t exactly in the mood to get shaken down by third base ump Dan Iassogna after he got the final out of the inning.

As Iassogna approached Romo to check him out, the veteran righty threw his glove and hat on the ground. He ripped off his belt and threw that at Iassogna’s feet, too. The cherry on top was the way he unbuttoned and unzipped his pants before yanking them down to his knees.

Manager Bob Melvin said after the game that he thought Romo was just having fun.

One guy who absolutely was not in a joking mood about the foreign substance inspections was Max Scherzer.

But when Phillies manager Joe Girardi asked the umpires to check him again in the middle of an inning, Scherzer was fed up. He tossed his hat and glove down on the ground and undid his belt (though he didn’t go as far as Romo) as he repeatedly told the umpiring crew, “I’ve got nothing!”

After finishing the inning, Scherzer stared daggers at Girardi, who got ejected after leaving the dugout to bark at Scherzer.

Girardi’s inspection request clearly bothered Scherzer, and it brings up an interesting strategic question. Might opposing managers try to rattle pitchers by asking the umps to check them for sticky stuff? It’s a perfectly legal way to get inside a pitcher’s head.

A full 60-pick NBA mock draft after the results of the lottery. … Ten players who could make their first Pro Bowl in 2021. … In its first season, the NBA’s G League Ignite program may have produced two top-five picks.

The makers of the Ball Mudder machine claim it cannot only apply a uniform amount of mud to baseballs but also apply a substance that changes colors if it comes in contact with any sticky stuff. … The Harlem Globetrotters want to become an NBA franchise. … Two brothers set a record by traversing a 2,800-foot-long highline 1,600 feet above a gully at Yosemite National Park. … Mickey Jannis, the 33-year-old knuckleballer, was called up to the majors for the first time by the Orioles.

(Head coach Monty Williams said they had never practiced that play before.)

Rob Manfred isn’t smart enough to think of this

Jalen Rose was hyped after the lottery

How strong was the wind here?

Look who made it to Omaha for the College World Series

A California man was arrested after being accused of stealing 42,000 pounds of pistachios. … One of the hedge funds that bet big on GameStop stock is shutting down. … A New York Times analysis of Subway’s tuna failed to identify any tuna DNA. … The surface of Venus is moving.

Bob Odenkirk is in the new season of I Think You Should Leave with Tim Robinson!