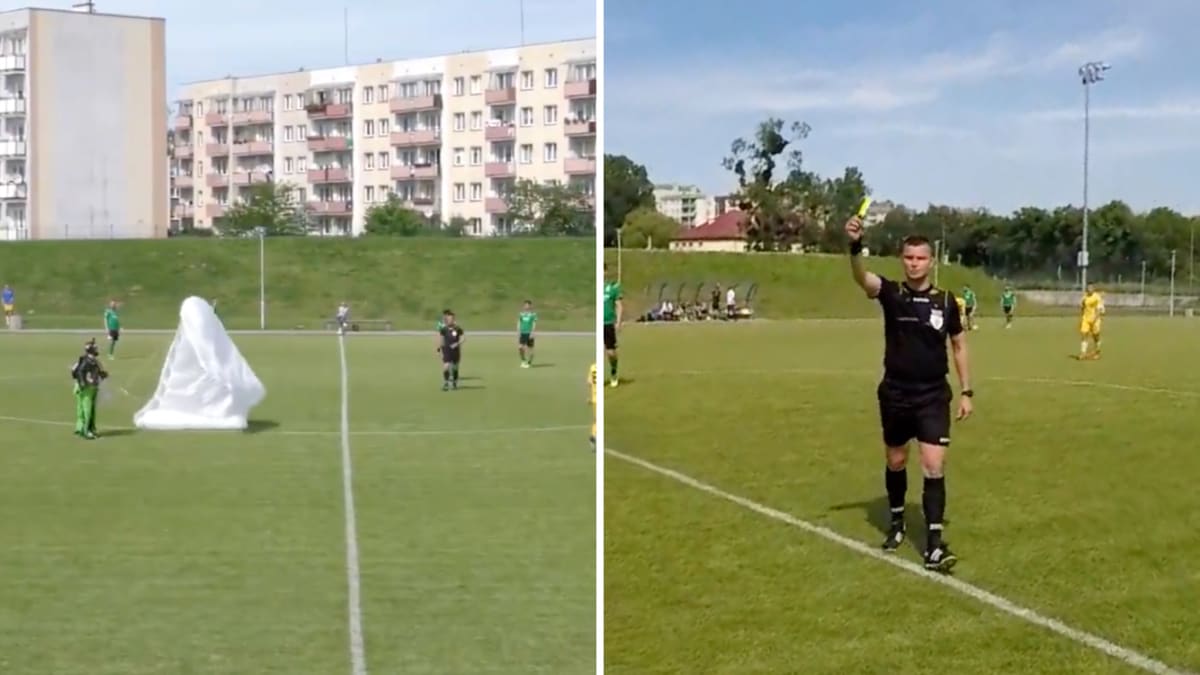 This isn’t the kind of dive you’ll usually see on a soccer field.

A game in Poland’s fifth tier on Sunday between the Olimpia Elbląg reserve team and PISA Primavera Barczewo was interrupted by a skydiver landing in the midfield circle right in the middle of play.

Everyone on the ground handled the bizarre situation pretty calmly. The players scurried out of the way of the airborne pitch invader, the announcer let out a hearty chuckle and the referee responded by showing the parachutist a yellow card.

That is some impeccable comedic timing by the ref. He just walks up to the skydiver like it’s the most normal thing in the world and doesn’t bat an eye while showing him the yellow. Not a red. Let’s not overreact to the person falling out of the sky and into the middle of a soccer game. That’s only worth a warning.

What makes the incident even better is that the skydiver took a first-person video of their descent into the park. It shows plenty of open green space around the soccer field, but whether they didn’t think they could make it to the meadow in the distance or they just felt like dropping in on an amateur sporting event, they ended up right in the center of the pitch. The video also features an outstanding reaction from one of the players in yellow, who doesn’t realize there’s someone dropping in from above until the very last moment.

This isn’t the first time someone has dropped in from the sky to interrupt a sporting event. (It’s happened in England, Italy and, most famously, during a 1993 Evander Holyfield fight.) Even though it was in a game at the bottom of the Polish soccer pyramid, the ref’s yellow card makes this incident one of the best of its genre.

Guys like Trevor Bauer and Gerrit Cole should’t bear the brunt of baseball’s sticky stuff scandal. … College football coaches love to vacation in this one spot on Florida’s Gulf Coast. … Expert predictions for the European Championships, which begin on Friday. … What’s next for Luka Dončić and the Mavs after getting bounced in the first round?

23-year-old Riley Pint, the No. 4 pick in the 2016 MLB draft by the Rockies, is retiring from baseball. … A man attempting to kayak from California to Hawaii had to be rescued by the Coast Guard seven days into his journey. … Derrick Rose got one first-place vote for MVP but it came from the fans. … The women’s NCAA tournament might be able to use the March Madness branding.

A 470-foot bomb from Ohtani

He really spun this response

This, on the other hand, wasn’t particularly close

60% being near the top of the league is… not great

A knife in the back for Leafs fans

He just finished his sophomore year of high school!

An alleged Australian drug kingpin unwittingly convinced criminals to download a messaging app that was being monitored by the FBI. … Mike Myers will star in a new Netflix mini series in which he will play seven different characters. … National Geographic has classified the waters around Antarctica as a separate ocean. … A plane scheduled to carry White House reporters to Europe was grounded after cicadas invaded the engines.

Biggest news of the day