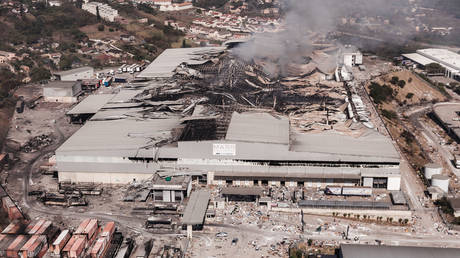 The recent deadly South African riots sought to topple President Cyril Ramaphosa, and the worst may be yet to come, a veteran politician and Zulu tribal leader has told RT.

“What is happening now actually should not surprise us,” Mangosuthu Buthelezi, a former minister of home affairs, told RT’s Paula Slier.

The shocking unrest last month was “well-planned and coordinated, and not spontaneous at all,” he said.

The veteran politician added that the violence stems from “the faction fights” within the ruling African National Congress (ANC) and dates back to the highly contentious 2017 race for the party leader, in which Ramaphosa narrowly beat Nkosazana Dlamini-Zuma, the ex-wife of former President Jacob Zuma.

The riots, which claimed at least 337 lives, began as protests against Zuma’s arrest and criminal conviction. The former president handed himself over to police on July 7, after being sentenced to 15 months in prison for failing to appear for a corruption investigation.

Zuma is currently being tried on fraud and corruption charges that date back to 1999, when he served as deputy president. He denies the accusations and argues that the case is politically motivated.

“I’m not a prophet, but it seems to me that [the unrest] is just a dry run of the worst things that may happen,” Buthelezi said.

My opinion is that the aim is to topple Mr. Ramaphosa. This is actually a coup, as far as I’m concerned, which did not succeed. But we don’t know what may happen later.

The politician explained that the social tensions have been exacerbated by economic mismanagement and the effects of Covid-19. “South Africa is not far from being a failed state,” Buthelezi said.

The riots have been described as the worst case of violence South Africa has seen since the apartheid regime fell in the early 1990s. Troops were deployed to help police restore order, while locals formed community patrols to prevent further damage.

Many shops remain closed after at least 40,000 businesses were looted during the height of the unrest.

Ramaphosa condemned what he said was “a failed insurrection” and said the government was “poorly prepared for an orchestrated campaign of public violence, destruction and sabotage.”

Former ANC spokesperson Carl Niehaus, a close friend of Zuma, said last month that there was no coordinated campaign that led to violence. “There is, however, an uprising of people who are deeply concerned and angered by [his] imprisonment.”

Also on rt.com
Cry, the bedevilled country: I weep for my homeland of South Africa, as I watch its disintegration from afar