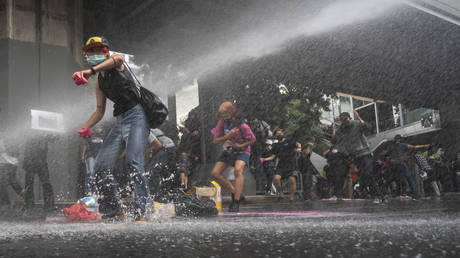 The Thai police force deployed a water cannon on Tuesday to disperse anti-government protesters who’d gathered in central Bangkok to call out Prime Minister Prayuth Chan-ocha over his handling of the Covid pandemic.

Clashes between protesters and police broke out near the national police headquarters and outside the Prime Minister Prayuth Chan-ocha’s residence on Tuesday, as authorities sought to control a crowd of activists calling for the government to step down over a growing Covid outbreak.

Footage circulating on social media showed authorities spraying a crowd of protestors with a water cannon. Witnesses claimed that activists responded by initially standing their ground and throwing paint and water bottles before retreating through the streets.

The Tuesday demonstrations marked the third straight day that protesters gathered in Thailand’s capital city to call on the prime minister to resign over what they see as his failed handling of the Covid pandemic.

“We stressed that we are out here peacefully to express our disapproval of the government’s performance,” one activist, Songpon Sonthirak, told reporters.

Authorities defended their decision to deploy a water cannon, with police spokesperson Kissana Phathanacharoen claiming they responded to a volley of objects thrown by protestors and that action was only taken after “repeated warnings.”

The latest outbreak of violence between police and activists comes after six people were injured on Monday during protests near the prime minister’s residence. One medic who was treating injured protesters claimed a minor was hit by a bullet. Police deny live ammunition was used against the crowd.

In recent weeks, Thailand has seen Covid cases and fatalities from the virus rise to 948,442 and 7,873 respectively, according to the country’s health ministry, as of August 17.

In response, the country’s government has introduced Covid restrictions on parts of the country, limiting domestic travel and threatening the nation’s tourism industry, as access to holiday hotspot Phuket was cut off amid the recent outbreak.

‘Next 24 hours critical’, as crews battle largest wildfire in US | Climate News

US lab stands on threshold of key nuclear fusion goal