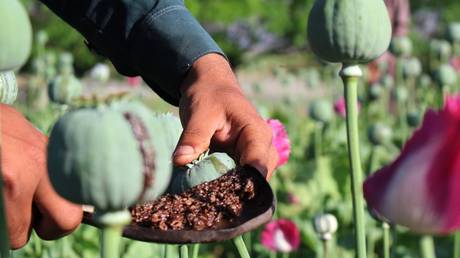 The Taliban funded its insurgency against NATO troops with illegal opium trade, but now it once again wants to eradicate poppy cultivation and needs international assistance to do so, a senior militant movement official said.

“Three million Afghans are drug addicts, this is a disaster,” Zabihullah Mujahid, who was appointed information minister in the Taliban-installed government, said in an interview with Russian media.

We will need the international community’s help to replace poppy cultivation with other crops.

Afghans have been cultivating opium poppies for domestic consumption for centuries, but turned into a world-leading source of illegal drugs during the last decade of the Cold War. The plant, which grows readily in the harsh conditions dominating many parts of the country, became a major source of income for US-backed militias, which fought against Soviet troops in the 1980s.

The burgeoning industry producing opium and heroin in Afghanistan has flourished since then, throughout the Soviet withdrawal, civil war and two decades of NATO presence. An exception came in 2001, when a Taliban government in Kabul launched a crackdown on poppy cultivation in the territories it controlled.

The Islamists hoped that it would facilitate diplomatic engagement with major world powers like the US. The September 11 terrorist attack in the US and the subsequent invasion of Afghanistan by the NATO-led coalition reversed the policy, as well as local backlash. Illegal drug production swiftly recovered and helped fill the coffers of different sorts of people in Afghanistan, including Taliban commanders themselves.

The US ostensibly tried to eradicate it through programs like sponsoring cultivation of other plants and raids on poppy fields and clandestine labs, but with little success. The lack of progress was partially explained by the reluctance to strip poor Afghan farmers of their incomes. The fact that some corrupt people, allied with the US, had a hand in the opium pie – and in some instances allegedly used the Americans to quash competing drug profiteers – was a major factor too. Russia, one of destinations for the Afghan-produced opiates, has complained for years that NATO has been turning a blind eye to the drug problem.

The large availability of drugs combined with economic hardship and other stress factors also caused a major addiction epidemic in Afghanistan and some neighboring countries, primarily Pakistan. Millions of people are affected in both countries.

After seizing Kabul earlier this month, the Taliban announced its government would be going back to the zero-tolerance drug policy. It introduced severe punishment for traffickers, but it remains to be seen how this will affect the drug trade. Skeptics point out that the movement will be shooting itself in the foot if it proves to be serious about implementing its rules, especially since the US appears intent on stopping the Taliban-installed government from taking control of Afghanistan’s international assets and aid.

Some 80% of Afghanistan’s budget has been financed by the US and other international donors. Now, it’s all gone. Last week, the IMF decided that Afghanistan would no longer be able to access its resources, including the over $370 million set to arrive later this month. The World Bank halted funding for projects in Afghanistan after the Taliban seized control of the country.

Also on rt.com
80% of Afghanistan’s budget has disappeared overnight

Countries impacted by the Afghan-produced heroin may not benefit much either if the Taliban succeeds in curbing drug production. There are plenty of poorly-controlled places in Asia where poppies can be grown and processed by organized criminals, like in Myanmar, which was the biggest heroin producer in the world in the 1980s before more cost-efficient Afghanistan took over. Meanwhile synthetic drugs like fentanyl don’t require vast cultivated fields to provide the raw materials.