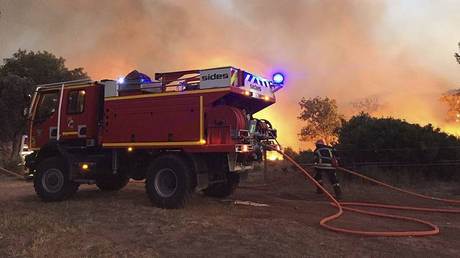 French officials confirmed on Tuesday that “thousands of people have been evacuated as a precautionary measure,” as around 750 emergency personnel battle an intense wildfire near the tourist resort of Saint-Tropez.

The wildfire was sparked by a blaze that started at a motorway stop 60 miles from the French city of Toulon, spreading to more than 3,500 hectares of forest by Tuesday morning, according to a statement from the local fire department.

Speaking to the media, fire-service spokesperson Delphine Vienna said that “thousands of people have been evacuated as a precautionary measure” by emergency personnel amid the “very fierce” blaze. So far, the local authority has confirmed that six firefighters have been injured and around 20 people are being treated for smoke inhalation.

The evacuation has, so far, mainly been around the popular tourist resort of Saint-Tropez and nearby villages of Le Mole and Grimaud. The area for evacuation may be extended, as the fire is “spreading at a speed of four kilometers an hour.”

French President Emmanuel Macron and Interior Minister Gerald Darmanin will visit the impacted areas on Tuesday, as authorities engage in what the fire service called a “very difficult battle” to contain the blaze. The south of France is the latest European region to be impacted by blazing wildfires, with hot and arid temperatures fueling the spread of fires through woodlands and forest, forcing firefighters to rapidly evacuate residents and tourists, sometimes by sea.

Greece, Italy, Spain and Turkey have all struggled to bring blazes under control in recent weeks, as fires spread through forest and farmland, bearing down on villages and towns. Similarly, Algeria and Bolivia have experienced fierce wildfires that have torn through vast swaths of land, with experts warning that global warming will continue to create a climate that fuels such devastating blazes.