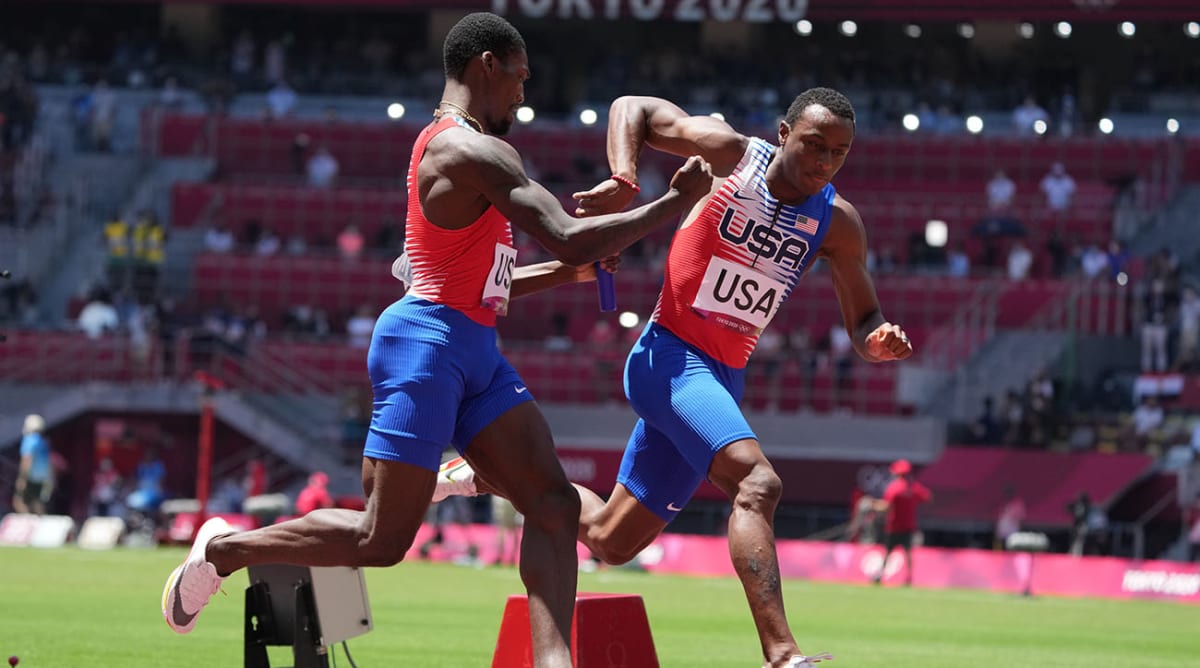 TOKYO — As track and field unfolded at a dizzying pace this week, with fast times and a blizzard of broken world records, the United States seemed poised to present a new, youthful and charismatic gauntlet of stars to the world. At least, that is, at first.

With Noah Lyles (24, 200 meters) and Grant Holloway (23, 110-meter hurdles), plus the men’s 4X100 relay team, favored for gold on either Wednesday or Thursday, a banner Olympics loomed on the near horizon. One that would highlight this new youth movement. “It’s cool to be part of this generation of athletes pushing the boundaries on what’s possible,” McLaughlin said.

That narrative changed, suddenly and dramatically, unraveling in Wednesday’s night session and Thursday’s daytime one. This happened on the men’s side of the track, which usually ranks among the Team USA’s greatest strengths. Lyles landed a bronze medal rather than the one he wanted on Wednesday night. Twelve hours later, the men’s 4X100 relay team ran as if burly shot-putters had swapped bodies with them.

Thus an unwanted piece of history became a lot more attainable right around then, after the precipitous collective stumble. Because in every Olympic Games the U.S. has competed in, at least one American man has left with a gold medal in their suitcase. There was only one exception: 1980, when the U.S. boycotted the Moscow Games and no American runner could win, because no American runner actually competed. In Tokyo, six of the 10 events on the men’s side had already concluded Wednesday, and the U.S. runners had collected three silvers and a bronze.

Still, no one seemed overly concerned. Not with the hurdler known as Wonder Boy scheduled to compete. Despite a four-star ranking as a football wideout, Holloway turned down scholarship offers from powers like Georgia and Florida, chasing greatness of the hurdle-variety instead. In 2019, he won gold at the world championships. In June, his 12.81-second finish marked the fastest time this year, trailing only the world-record mark, and only by 0.01.

Holloway didn’t seem like the type to be fazed by history. He seemed—he seems—like the type to make it. The first two tattoos he had inked on his arms read “wait a moment for your moment” and “surround yourself with positivity.” He’s an eight-time NCAA champion. Surely, not long after the 4X100 embarrassment on Thursday, he would collect the first gold for an American male runner, keeping the bad kind of history at bay.

Wonder Boy projected earned confidence as the introductions unfolded at National Stadium just before noon. Of course, all the finalists exhibited that in one way or another. One smirked; others flexed or thumped chests; one, American Devon Allen, did some sort of intro charades.

Holloway took his place in Lane 4, shaking out whatever nerves, if any, bubbled below the surface. The television cameras zoomed by overhead, revealing that single straightaway with 10 hurdles before the finish line. When the gun sounded, Holloway leapt in front, an impressive feat, because he was also leaping over hurdles. Only later would what happened next become clear: he had seen the finish line, as in, considered what it might be like to win, to wear that gold medal, bask in the celebration. Once he lost his focus, though, he also lost the lead, falling to third before jolting back with a last-second surge that netted him the silver.

The yikes history remained in play. Holloway shook his head as he walked slowly off the track. He also stole repeated glances at the time clock, as if he couldn’t believe his time or where he ranked. Hansle Parchment of Jamaica took the gold, and Holloway, graceful in defeat if not OK with it, offered the man who took advantage of his lapse a hug.

Apparently, Holloway can catch passes, sprint with superhuman speed and deliver compelling interviews even in defeat. On Thursday, he ruminated on how much it “sucked” to win a silver medal, even asking reporters if they would be OK with finishing in second place. (In the world? Well, duh, of course!)

Holloway repeatedly credited Parchment for the race he ran. He drew a distinction between being “happy” with the silver (he was) and “satisfied” by it (he was not). He dropped a “hell no” when someone asked if the fast and bouncy track here might have thrown off his rhythm. Like a true football player, he said he could not yet make any real judgments, not until he “watched the film.” He laughed and smiled and dropped his head and frowned, exhibiting almost every possible human emotion. Finally, when the session ended, the athlete and his “sucky” medal said, as to what’s next, he would “go do whatever it is that silver medalists do.”

While Holloway at least publicly accepted his defeat with charm, the U.S. men’s 4X100 runners were not in the same mood. That’s understandable. Track coaches can draw for that team from one of the deepest—and fastest—pools of sprinters around. This year, three of the four fastest 100-meter runners in the world made the squad and all four of the fastest Americans did. That group included Fred Kerley and Ronnie Baker, a pair of 100-meter finalists in Tokyo. Kerley finished second, won the silver; Baker came in fifth.

All the U.S. team needed in the late-morning sauna of a stadium was to finish third or better in its heat. Instead, they didn’t lose so much as they got smoked. They finished sixth, behind China, Canada, Italy, Germany and Ghana. Please, read that list again if you’re not sufficiently shocked.

Afterward, the relay members struggled to make sense of what could not be explained. Perhaps there was no way to understand that type of performance, let alone articulate what happened beyond what’s obvious. None took the bait on questions related to practice time, or the lack of time they had. All who spoke blamed the team’s performance—and they were not yet aware that sprinting OG Carl Lewis had posted on his official Twitter account that the relay team “did everything wrong” in their heat, were “a total embarrassment” and had turned in a “completely unacceptable performance.”

Given the state of the U.S. track team only 24 hours earlier—at the same stadium, on the same track, the interviews done in the same place—the narrative shift was as striking as the mood one. It called to mind that line from the movie Anchorman; “Well, that escalated quickly!”

Worse yet, the 4X100 debacle continued another historical trend that all relay members would have loved to break. Gold medals won by Americans in the 4X100 used to be something of a birthright. But now, the U.S. hasn’t triumphed in that event on the men’s side since 2000. Cravon Gillespie also needed to watch the film, as track press conferences now felt like football ones. “You can’t just expect them to hand you a medal,” he said.

The U.S. men, at least, should be thankful there’s a second part to the discipline of track and field, along with a women’s team that in Tokyo met or exceeded its own considerable expectations. On Thursday, there was more gold, like when shot-putter Ryan Crouser shattered his own Olympic record with a heave that measured 22.93 meters. He became the first American in his sport to collect back-to-back golds since Parry O’Brien did in 1952 and ’56. He also celebrated with a roar, leaning back, fists clenched.

The American male sprinters could only watch him, perhaps with envy.

“We don’t have any golds?” Holloway asked.

Not in the track part of track and field for the men. Their best remaining chance will come in Saturday’s 4X400-meter relay, the final event at National Stadium. If they lose, the U.S. men will make the kind of history they’d just as soon cede to another group.