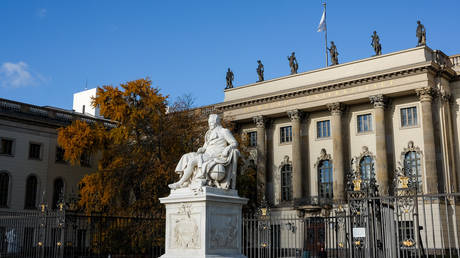 Berlin’s renowned Humboldt University has gotten in hot water after its Students Council published an ad for the position of anti-discrimination counselor. The ad was branded discriminatory as it discouraged whites from applying.

In late July, Humboldt University’s Students Council (AstA) announced it was looking for a person to full the position of an “anti-discrimination” counselor to help students facing discrimination over “race, ethnicity or migrant background” starting from September 15.

The job ad never hid the fact that the counseling would be held on a “partial” basis that would be focused on the “needs and positions of a person seeking advice.” It also added that the goal was to create an atmosphere “in which those affected by racist discrimination feel comfortable to share their experiences.”

Yet, it apparently went a step too far when it openly said that such a goal would be best achieved only if “the counselor is… black or a person of color.” The Students Council also did not stop at this and openly added that it “asks the white people to refrain from applying for this counselor position.”

The issue was picked up by the German media on Thursday and quickly drew criticism from politicians. Adrian Grasse, a Berlin lawmaker, condemned the ad as a “clear violation” of Germany’s General Equal Treatment Act.

“The advertisement for an anti-discriminatory [counselor] position is itself discriminatory,” Grasse, who is a science policy spokesman for the Berlian parliamentary faction of the Chancellor Angela Merkel’s center-right CDU party, told the German media.

The politician also demanded that university President Sabine Kunst and Berlin’s Mayor Michael Mueller “immediately ensure” the “scandalous” job ad is “taken down.” “Conditions listed there, according to which people with white skin should not apply, are illegal and blatantly discriminatory,” Mueller told Germany’s Bild newspaper, adding that “racism must not be fought with racism.”

German MP Christoph de Vries, also a CDU member, slammed the controversial ad as well, saying that it violates the nation’s constitution. “In short, the job advertisement is racist and discriminatory,” he told Bild, calling the ad an example of the “excesses of the leftist identity politics” that are increasingly dividing German society.

Also on rt.com
Scientific racism makes a comeback? Woke ‘Nature’ journal looking to hire an intern – but only if they’re black

The gravity of the issue reached such proportions that even Germany’ Federal Anti-Discrimination Agency had to take a stand on it. “In such a case, certain applicants must not be excluded from the onset,” the agency’s head, Bernhard Franke, told Bild.

Following the outcry, the university told the German media it was “expressly not in the interests” of the educational facility to discriminate against any people, regardless of their skin color, origin, gender, ideology or age. The university also said that it sees itself as a “place [of] plurality of opinions, mutual appreciation and respect.”

The university also said that it asked the student council to review the advertisement but denied any legal responsibility for the incident. The student body is technically an independent structure that is not subject to legal supervision by the university administration, a spokesman for the educational facility told Die Welt newspaper.

The Student Council itself did not comment on the scandal. Instead, it changed the ad on Thursday evening and removed the controversial passage discouraging whites from applying for the job. Now, the ad says that the “counseling work has shown” that its goals are “best achieved by people” who experienced racist discrimination themselves. It also says that the council wants to “particularly encourage” victims of racist discrimination to apply for this position.

A similar ad for another “anti-discrimination counselling” job published by the council in May still features a passage that says it is “desirable” that the future counselor have a “relevant background (is black or a person of color).”

US COVID-19 hospitalisations rise to 100,000, most since January | Coronavirus pandemic News