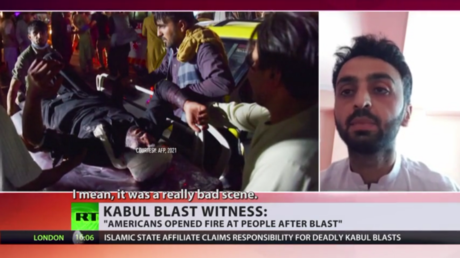 An already chaotic scene outside the Kabul international airport was turned into a living nightmare by a terrorist bombing attack. RT spoke to an eyewitness of the blast, who shared harrowing details of what had happened.

In an interview given via a video link, Wahidullah Ahmadzai described how he and his relatives almost died near the Abbey Gate of the Hamid Karzai international airport, which was targeted by the terrorist group Islamic State (IS, formerly ISIS) on Thursday.

Ahmadzai said he accompanied his aunt and her children, to help them get inside and get flown to the UK. They had all the necessary paperwork to leave, but due to the large number of people desperately trying to get inside the airport, the situation was not safe, and any extra assistance could come in handy.

At the time of the attack, Ahmadzai and many other Afghans were sitting on a wall, trying to get the attention of NATO troops guarding the airport.

“When the explosion happened, we fell from the wall on the footpath. There were lots of people [there] so we fell on them. And when we fell on them, the effect of that explosion just came to us,” he said.

Our eyes were full of tears. And also we couldn’t breathe, like there was no oxygen for 30 or 40 seconds.

The powerful blast was unlike anything Ahmadzai had witnessed in the more than 20 years that his family lived in Kabul, he said. People panicked, both the Afghans outside and the guards inside. The Americans “started shooting,” he said, adding that he believed some people in the crowd got shot by the US troops in those initial moments of confusion.

As terrified people fled for their lives, a stampede started, and Ahmadzai got separated from his aunt’s family, he said. He fell on the ground when his foot got stuck in something, but luckily his shoe came off and he managed to get to the wall again and climb up. Then he finally managed to circle back and find his relatives, who he feared could have been trampled to death by the crowd.

“I saw them and they were all crying and shouting. They got hurt when the crowd was running,” he said. “I was really thankful that they were alive. We were so happy.”

Also on rt.com
Taliban claims at least 28 of its members killed in Kabul blasts, vows to step up security but no deadline extension

The danger of being crushed by those who continued to flee from the scene remained quite real, Ahmadzai said. So he had his 15-year-old nephew join him in protecting the woman and younger children with their bodies as they sat near a wall.

“I told him: give me a hand and we will shield them, protect our family, so people don’t stampede them again,” he said.

When it was safe to leave, Ahmadzai and his relatives had to pass the scene of the blast, where he witnessed dozens of dead people laying on the ground. He instructed the kids to look at walls to spare them from the horrific sight of bodies literally torn to pieces by the explosion.

Ahmadzai is among thousands of Afghans desperately trying to find a way for themselves and their loved ones to escape. He said his father worked with the Americans and applied for the Special Immigration Visa program in 2017.

Also on rt.com
Additional explosions heard in Kabul were controlled demolition of ammo by US forces, not further attacks – Taliban

The lightning-fast takeover of Kabul by the Taliban and the rush of asylum seekers of all kinds to the US-controlled airport has resulted in his family being “abandoned,” Ahmadzai said. Unfairly so, he believes, since his father faces a bigger threat from the Islamist movement than some of the people who did get evacuated.

“Afghanistan is not a reliable country. And nowadays it’s just hopeless,” Ahmadzai said. People like him are “going door to door to find something, someone who could evacuate us, help us and get out of this country.

But we are still stuck in here.

Microsoft backs down: Older PCs will be able to run Windows 11