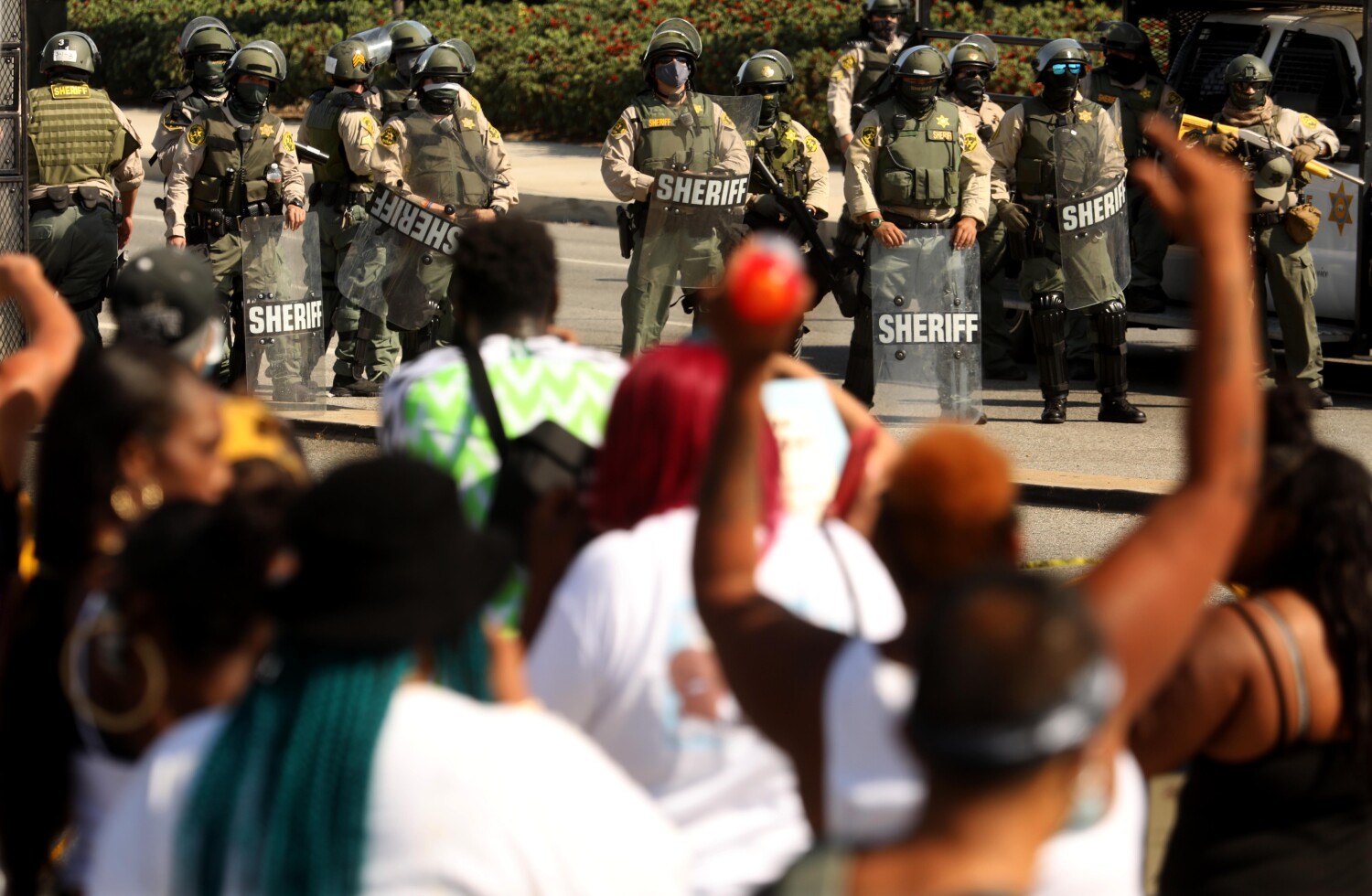 A woman who says her right hand was maimed by a projectile fired by a Los Angeles County sheriff’s deputy during a protest in September has sued the county in a federal civil rights lawsuit.

The suit, filed by Gabrielle Bynum on Friday in the Central District of California, claims alleges that she was peacefully attending a protest condemning the fatal shooting of Dijon Kizzee near the South L.A. sheriff’s station when she was struck from behind by multiple nonlethal police projectiles, violating her right to free speech and assembly, as well as her right to be free from excessive force.

One of the projectiles, Bynum alleges, fractured her right thumb, requiring surgery. She says she still has difficulty using that hand for everyday tasks such as writing, gripping a doorknob and turning the key in the ignition of in a car.

“It was very terrifying and traumatizing,” the South L.A. resident told The Times, adding that she hasn’t attended protests over police violence since then. “I don’t feel comfortable risking going anymore. It was … just too much for me.”

Representatives for the county and the Sheriff’s Department did not immediately respond to a request for comment. The lawsuit also sues unnamed deputies.

Protests in front of the South L.A. sheriff’s station in the wake of the Aug. 31 fatal deputy shooting of Kizzee in nearby Westmont drew hundreds of people for weeks.

Kizzee, 29, was shot more than a dozen times by deputies who tried to stop him because he was riding his bike on the wrong side of the street.

The department has said that during a struggle with deputies, Kizzee dropped a jacket with a gun inside and that deputies shot Kizzee when he picked up the gun and pointed it at them. His family’s attorneys have disputed that account, saying witnesses said Kizzee didn’t have anything in his hands when he was shot and have filed a legal claim against the county.

In the days after the shooting, there were numerous confrontations between law enforcement and protesters outside the sheriff’s South L.A. station on Imperial Highway, leading to use of force by deputies and dozens of arrests.

After a series of protests over Labor Day weekend, the department denounced nighttime demonstrators as “rebellious, self-proclaimed anarchists” who are “clad for battle,” alleging that they had thrown “frozen water bottles, fireworks, smoke bombs, glass bottles, metal pipes and chunks of cement to create chaos, damage and injury.”

But of the dozens arrested around that time, practically all were detained on suspicion of failure to disperse, rather than more serious charges. Activists said in interviews that the displays of force by deputies during the protests were unprovoked.

Bynum alleges that on Sept. 7, she was standing in a parking lot by the sheriff’s station during a protest while law enforcement officers in riot gear patrolled nearby.

“I heard the LASD [deputies] going back and forth with some of the protesters,” Bynum told The Times, noting that protestors had been telling deputies not to shoot “because they were already pointing their weapons.”

The lawsuit says Bynum heard raised voices, and seconds later, numerous deputies opened fire on protesters using pepper balls and stun grenades. Bynum, the suit says, “did not perceive any threat to the deputies that would justify any use of force, and no warning was given.”

After dropping to the ground behind a brick wall, the lawsuit states that Bynum tried to run while her eyes were burning from the chemicals. As she ran, it claims she was struck repeatedly by projectiles.

Bynum told The Times she has not returned to her job at Amazon since the protest and is on a disability leave because of her injury.

The Biased Show: Chelsea vs Manchester City - Who will win the Champions League final?